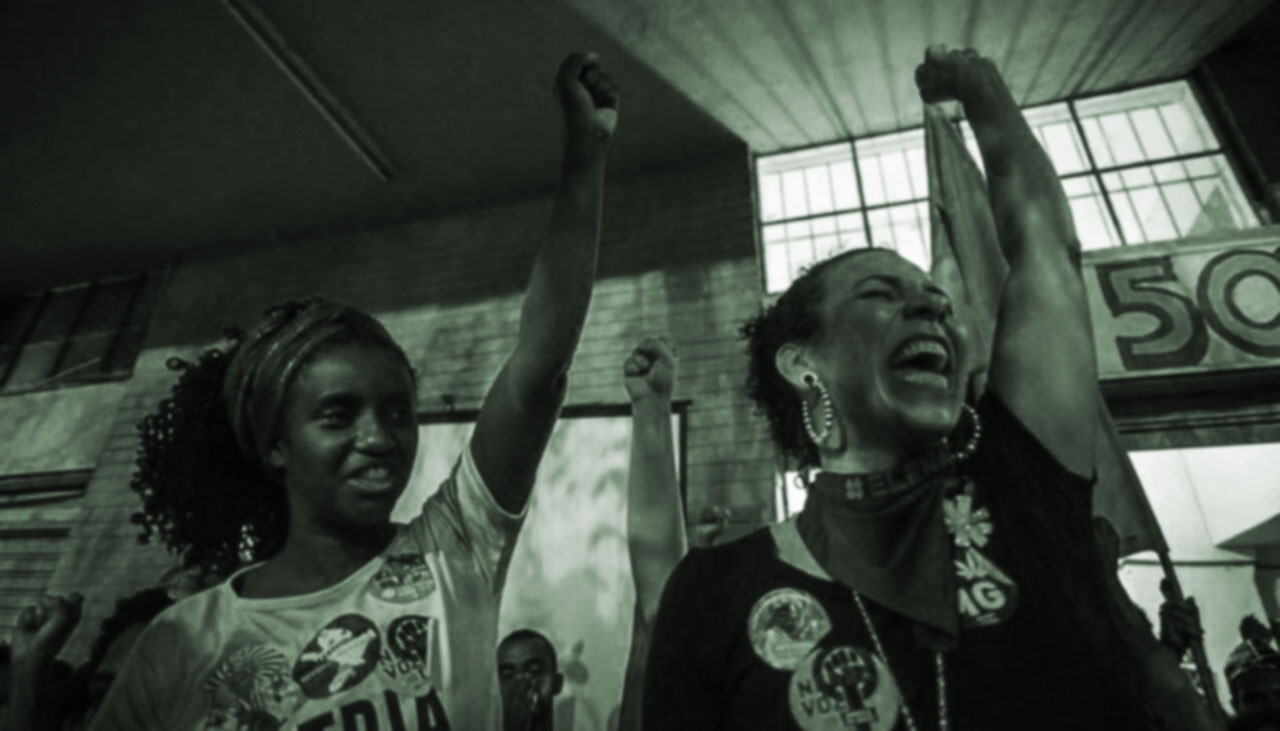 Born in Venda Nova district of Belo Horizonte, Andreia de Jesus, is a lawyer, educator, public employee and a State Representative for PSOL.

Patrick Foley, Brazil Solidarity Initiative: Thank you for giving us your time and speaking with the Brazil Solidarity Initiative. Our initiative is committed to standing shoulder to shoulder with Brazilians defending social progress, equality and human rights in Brazil and has been raising awareness of the political crisis and building international support for Brazilians resisting against Bolsonaro and the far-right.

While the international media has been focused on Bolsonaro’s first two months, there has been much less reporting about the millions of people standing up against his toxic political programme. It would be great to hear about your background and how you became involved in politics, and why you think your campaign was able to resonate in your community, especially at such a potentially dangerous time for progressive politicians in Brazil?

Andreia de Jesus: I started my political trajectory in the basic pastoral church nuclei (small groups of the Catholic Church that are politically progressive). I enrolled in the state-funded college and because of the course I got involved in the struggle for transportation, because we also needed to guarantee access to education. As a student of the law course of the Izabela Hendrix Methodist Institute I began my militancy in the Popular Brigades acting mainly in the defence of incarcerated people.

In 2018 I became a candidate for PSOL as a result of my involvement in campaigns related to the right to housing and the city, public security etc. Despite the upsetting scenario experienced in the presidential election, we also experienced an openness to the progressive sectors of politics, which can be proven by the election of women like Aurea Carolina and Taliria Petrone as federal congresswomen and my election to state congress in Minas Gerais. Perhaps this is related to the fact that we propose, through our political bodies, a new type of politics in which the connection with people and with society is at the centre of the construction of the political project for the places we occupy.

PF: Bolsonaro’s first two months were extremely chaotic – corruption in his cabinet, divisions between himself and the military, and the shocking allegations that his family are connected to the Paramilitary group accused of the murder of Marielle. Are the public aware of the scandals around Bolsonaro, and what effect has it had on his supporters and progressive Brazilians across the country?

AJ: The instability presented by the Bolsonaro government in its first months bare its inability to maintain even the smallest links of political unity in the country. An example of this has been the recurrent refusal of the president with the Chamber of Deputies, to work with president of the house, Rodrigo Maia. The process of unveiling the president’s governing incapacity to society will not occur instantaneously, so it is necessary for the progressive sectors to engage in building an accumulation of forces that both guarantees our resistance, and creates real conditions so that we can establish a counter-offensive against the government’s actions.

PF: The Minas Gerais Dam disaster was a truly devastating environmental event and human catastrophe. As a representative in Minas Gerais, how badly did this effect your community and how are the communities affected by the disaster recovering?

AJ: The Brumadinho disaster and the current context of the dams in Minas Gerais and in Brazil highlights an irresponsible practice of mining. The communities live in an atmosphere of constant fear and terror with each siren fired, with each simulation of evacuation organised by the miners. I have noted that communities are seeking to deal with the effects of mining and disasters by organising community defence committees, bringing together different sectors of society to discuss concrete problems and the daily impacts of mining on people’s lives. It seems to me that the popular organisation is one path to deal with such devastating disasters such as Brumadinho and Bento Rodrigues.

Q. March 14th marks the anniversary of the tragic assassination of Marielle Franco. At our public meeting on March 28th we held a tribute to her. Can you tell us about Marielle and about the women’s movement that sprang from her death?

AJ: I met Marielle at the Occupy Politics event in 2016 at a time when I immediately recognized her remarkable struggle against this perverse and violent logic against black women in Brazil. She built a political trajectory of resistance and confrontation, and overcame many obstacles. The death of Marielle Franco was an attempt to silence us, to reaffirm what the place of the black woman is, to take us out of spaces of power. Because of this, it is not possible to discuss the progress of the investigation without a reflection on institutional racism and the omission of the State.

I am a seed of Marielle, as well as the women’s movement that arose after her death with the strength of those who have preceded me and those who resist in the occupations, in the indigenous lands, in the rural areas, in the quilombola communities, in the favelas, in the peripheries, who occupy the legislative houses and National Congress to reaffirm: They will not silence us!

PF: Brazilian culture has had a profound effect across the world, and it was uplifting to see such a show of diversity, unity and resistance against Bolsonaro at this year’s carnival. What role do you believe cultural events like Carnival can play in the fight against the far right?

AJ: The party, the celebration, the eating habits, traditional knowledge, and more specifically the carnival have always been closely related to the forms and habits of resistance of the Brazilian people. Overall this year brought an intense politicization of the carnival blocks, exemplified in the Mangueira Samba School parade. The blocks are the picture of the varied forms of existence and resistance of our people. The far right is not used to it, but it will have to start accepting it.

PF: I was deeply saddened to hear about the death of Lula’s grandson. While it was a relief to see Lula released to attend the funeral, it was shocking to see far-right supporters cheering Lula’s pain and the death of a child. We have carried out a number of initiatives calling for an end to Lula’s political persecution, how large is the movement behind Lula in Brazil and what are the next steps in the campaign for his freedom?

AJ: The arrest of former President Lula, one of the greatest political leaders in the country’s history, opens yet another chapter in the ongoing coup unfold in Brazil and deepens the State of Exception.

We have the highest number of homicides in the planet, the third largest prison population in the world (which is rapidly growing), the police that executes the most and at the same time the one that dies the most. We oppose this failed policy – racist, classist, sexist, focused on the extermination of black youth and war on the poor masqueraded as a drug war. This punitive politics has brought us to a bleak scenario, to a war where almost nobody wins.

This article was translated from Portuguese to English by Beatriz Lacerda Ratton.