An international Libertarian organisation is behind proposals to privatise Brazilian cities, creating vast luxury condominiums for the most wealthy, and removing democratic rights from their citizens.

The proposals follow a very similar path to those being implemented in Honduras. This is no coincidence; the Central American nation has become the blueprint for the ultra-liberalisation of Latin American economies. These reforms are happening under authoritarian regimes brought to power by anti-democratic means, backed by the United States and its allies such as Canada and the United Kingdom. As Laura Gontijo warned in 2017, “Honduras today is Brazil tomorrow“, and correctly predicted that the coalition of military and corporate interests that was brought to power by the coup against Dilma Rousseff would not go quietly by democratic means.

The hemisphere’s latest laboratory for enforced ultraliberal economics, Honduras is pushing ahead with its own plans for private governance, in the form of special economic zones under the ZEDE programme. A futuristic centrepiece project, Próspera, on the island paradise of Roatán, was designed by Zaha Hadid architects, and has been met with fierce opposition and protest from the local population. What we see in the the Brazilian plans are the same theoretical and ideological blueprints, backed by a near identical set of international organisations, individuals and interests.

The new Brazilian charter cities would also be administrated by private companies, national or foreign.

Behind these plans in Brazil and elsewhere is a foundation called Free Private Cities, whose slogan is “The future of governance is private”.

Free Private Cities is the brainchild of its director, Titus Gebel, who according to the organisation’s website is “a German entrepreneur with a PhD in international law and an extensive worldwide network. He founded amongst others Frankfurt-listed mining company Deutsche Rohstoff AG, retired as their CEO in 2014 and emigrated with his family to Monaco. With Free Private Cities, he wants to create an entirely new product in the “market of living together”. If successful, it will fast-track knowledge and progress for humanity. Titus has dedicated the rest of his life to making Free Private Cities a reality.” 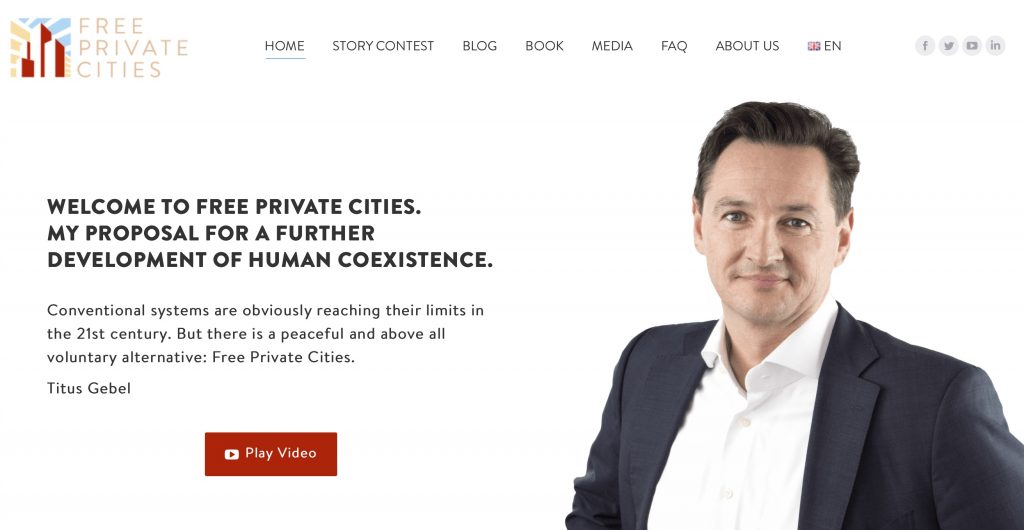 In what he calls his proposal for a further development of human coexistence, Gebel claims: “Conventional systems are obviously reaching their limits in the 21st century. But there is a peaceful and above all voluntary alternative: Free Private Cities.”

Private companies would provide paid services in these new special zones which were previously offered by the government.

Gebel is also CEO of Tipolis, a consultancy specialised in implementing private governance, who state that their “mission” is “Next-level Zones: We are building the world’s most advanced Special Economic Zones. We work with Prosperity Zones, Free Private Cities, Charter Cities and other projects at the frontier of governance innovation. Our projects are semi-autonomous special jurisdictions, run by an operating company. They offer companies and residents the basic services of a government as a one-stop-shop. The operator is entitled by the host nation, based on a special zone law. They enable countries to achieve economic growth, attract foreign investment, reach the UN Sustainable Development Goals and leapfrog development by using best practices from all over the world.”

Tipolis partners and clients include FEMOZA (World Free and Special Economic Zones Federation), the Institute for Competitive Governance, which “wants to show the world a better way to better government”  by encouraging the “research and development of relatively small but deeply innovative special jurisdictions”, and the fanciful Seasteading Institute which seeks to construct autonomous tax-free floating cities in international waters. 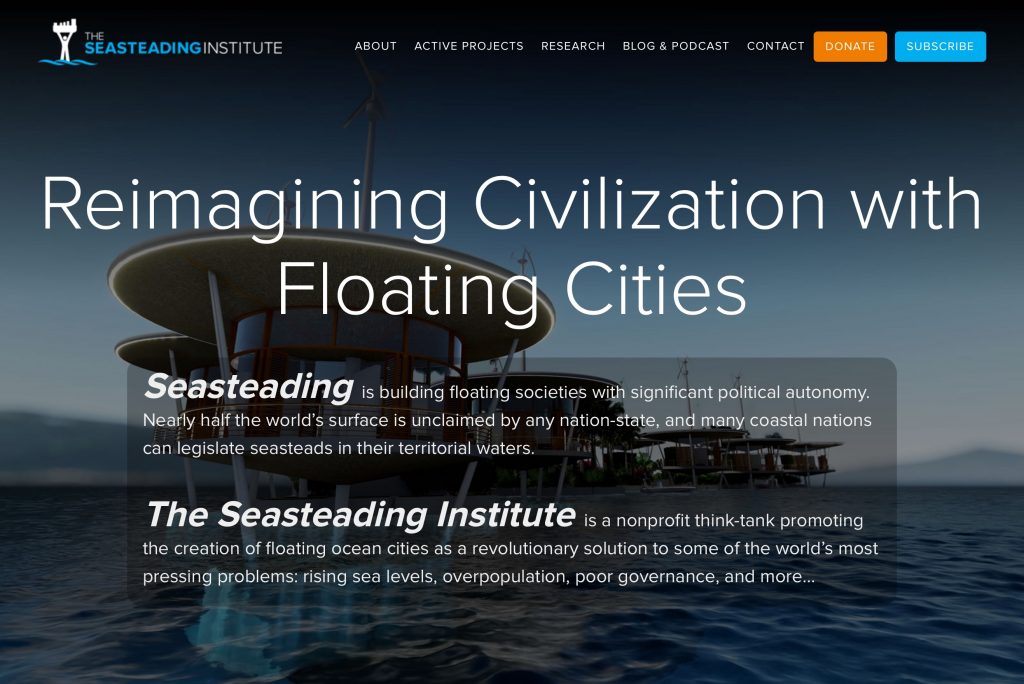 Free Private Cities has four Brazilians amongst its team of forty-one ambassadors. Thirty-nine are white men.

The ambassadors have the recognisable profile of Brazilian libertarians – or anarcho capitalists as some like to call themselves – as typified by Partido Novo, Instituto Milenium, and fellow Atlas Network member Movimento Brasil Livre, which campaigned for both the 2016 coup, and for Jair Bolsonaro at the 2018 election. These and other electoral sectors now often argue that their vote was not for Bolsonaro, but for the economic programme of ultraliberal economy minister Paulo Guedes. Conservative Veja magazine even claimed at the time that Guedes would effectively be “president”, should the far right candidate be elected.

Raphaël Lima, from Curitiba, is the “Libertarian activist and entrepreneur” founder of Ideias Radicais, which has promoted Free Private Cities in Honduras to a Brazilian audience. Pedro Dias, from Lagarto, is an economist, a student of the Austrian School of Economics, and and translates material on private governance into Portuguese. Bruno Carlos, based in Rio de Janeiro graduated in “Leadership Development”, from the United States’ John Maxwell Co. institute and is head of ZeroVinteUm, “a project that seeks to bring and develop new leaders with an exclusive method in the seven areas of influence of society.”

Last of the four, Rodrigo Quercia describes himself as a “profound strategic thinker”. Quercia is the CEO of the Brazilian conglomerate Grupo SolPanamby “…concentrating in real estate development and large land development projects.” Born in São Paulo, Quercia claims to have “experienced first-hand the devastating effects poverty can have” and insists that “the causal role that bad governance has in generating impoverishment drove him to focus his efforts on sustainable socioeconomic development through governance reform.”

This is a familiar libertarian trope, poverty reduction is regularly cited as a theoretical advantage of private governance, without credible supporting evidence. Conversely the nebulous concept of “bad governance” (read: popular participation) is deemed responsible for poverty, and an economic system which both requires and perpetuates it is absolved.

Quercia has indeed seen bad governance up close, as his father Orestes was both former Governor of São Paulo and Mayor of Campinas, where he faced various accusations of corruption, including involvement in the Odebrecht bribery scheme (which was later used as a premise to bypass Brazil’s democracy), alongside non-competitive tenders with Israeli technology producers, and irregularities over the privatisation of doomed airline, VASP.

Now a director at Tipolis, Quercia worked in the investment banking sector both in Hong Kong and Brazil, and has brought Free Private City experience home directly from the Honduras Próspera project which, according to its website, is is partnered with the government “to launch the first hub for sustainable economic development on the island of Roatán – breaking ground in 2020. This semi-autonomous zone is built on the Próspera Platform and anchored in the Honduran Constitution.”

For decades Brazil’s urban development model has been moving back to its colonial past, towards enclosed private condominiums, walled citadels rising out of the countryside and from the sprawl of cities such as São Paulo. The Alphaville concept took this a stage further, with entire neighbourhoods constructed in the form of gated communities, and Rio’s Porto Maravilha project became effectively a city within a city.

But with libertarian ideology now running amok within the Bolsonaro government, the proposed charter cities have become an apparent logical conclusion for this type of development.

In 2020, with its Real currency at an all time lows against the Dollar, Brazil’s Senate unexpectedly approved a bill opening up ownership of rural land to foreign companies and individuals. Supporters claimed it would lead to R$50 billion of (cut price) foreign investment in the country. One condition of the new legislation, if passed by Congress, would be that foreign ownership of the land must “fulfill a social function.”

Failure to include any provision for democratic participation is cited as a “vulnerability” of the charter cities project.

Thayná Schuquel earlier reported for Metrópoles that Brazil’s federal government was studying the effective privatisation of entire cities. That month, the National School of Public Administration (Enap) held a seminar to debate the concept. Geanluca Lorenzon, director of the Special Secretariat for Bureaucratization, Management and Digital Government at Paulo Guedes’ Ministry of Economy, stated that they are dedicated to implementing the charter city model.

“Our research, so far, has indicated that we will be able to move forward with this proposal. We will have a project designed, and are thinking about how we will implement it. It is a topic that has a good reception and deserves to be studied and passed”, said Lorenzon. In 2019’s Provisional Measure for Economic Freedom, the government included a proposal for charter cities. Despite the bill did not passing Congress, Lorenzon believes that parliamentarians are open to the idea. “We made a political test and proposed an amendment that would provide for a special economic zone by state. It was a clause that served to test the waters of Congress on the topic,” he said. It is unclear when the newest proposals will reach Congress.

Failure to include any provision for democratic participation is cited as a “vulnerability” of the charter cities project. The privatised municipality model presented for implementation in Brazil coldly acknowledges that: “Charter cities tend to be organized, at least in their early stages, as technocracies and non-democracies and can become ‘luxury condominiums’ for the richest strata of the population”.