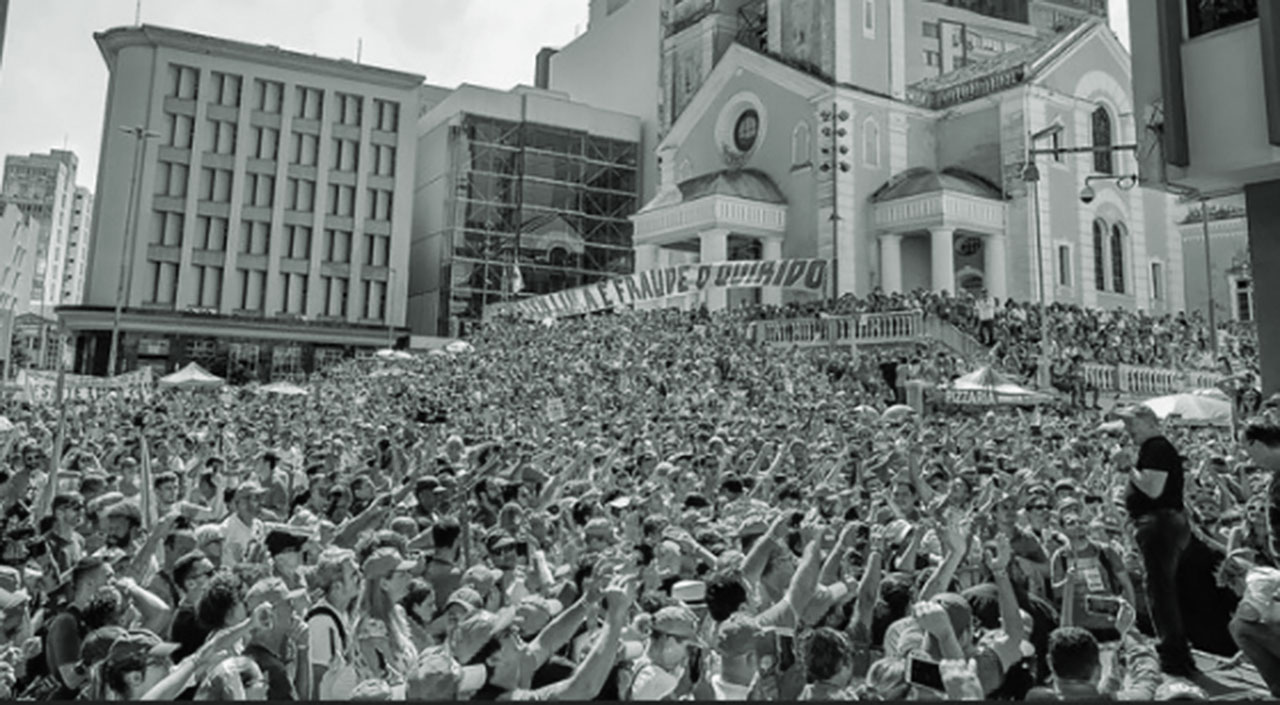 On the night of March 27, in the conservative state of Parana, a small group of militia men opened fire on a bus full of journalists that was traveling in ex-president Lula’s Caravan, a whistle stop tour of Southern Brazil in preparation for the 2018 presidential campaign in which he is leading all polls. The attack was carried out ambush style, after spikes were laid in the road to give the bus a flat tire. The shooters used low caliber weapons, appear to have aimed at the bus fuselage and nobody was injured. This was the latest in a series of episodes along the tour in which gunmen hired by wealthy ranchers and plantation owners have tried to scare and humiliate the hundreds of thousands of primarily poor and working class people who have come out to see Lula. During the course of the caravan right wing militias associated with the Koch-brothers supported Movimento Brasil Livre and neofascist presidential candidate Jair Bolsonaro have incrementally increased the levels of violence and harassment, frequently focusing their aggression on women in attacks with whips, clubs and rocks.

Leonardo Fernandes, a reporter for Brasil de Fato, was on the bus as it was ambushed. “We had just finished a rally in Quedas de Iquaçu (Parana), which was the second to last stop on Lula’s tour of the South. We were about 15 minutes out of town when we heard a noise that sounded like a rock hitting the side of the bus. This didn’t surprise us because during the entire southern tour  our bus had been hit with rocks and eggs. We kept going but as we arrived near the next town the driver realized that one of the tires was flat. The militias had thrown spikes in the road hoping that it would cause the buses to slow down and they fired shots at our bus, carrying the journalists and another bus that had some of Lula’s guests on it. I have to emphasize that we have seen a growing level of violence along the tour.  Our buses were pelted with rocks and they tried to block off the road in Bage, Rio Grande do Sul. Yesterday we were stopped near Francisco Beltrão in Parana and some men, who haven’t been identified yet, tried to shoot fireworks at our bus. So what we can see is that they have made several attempts to force us to cancel the tour, and since the organizers are determined to keep going until the end, which is marked for March 28 in Curitiba, the level of violence against us has increased, culminating with this ambush by an armed militia.”

Journalist Lucia Helena Issa compares the strategies used by the militias in this region of heavy Italian immigration to those of Mussolini’s Black Shirts.

The Black Shirts attacked women and children, beat strikers, intellectuals, peasant activists and any other group that thought differently from the fascists. The Black Shirts killed 600 Italians during the 1930s, while the police refused to intervene. But in the beginning these militias used whips and clubs because their goal was to humiliate their enemies and not kill them. In attacking women who were participating in a political rally the similarities between the MBL and its militias with the young Italian fascists of the 1930s is frightening.

In Parana, where the final event of the tour is scheduled to take place tonight, Governor Beto Richa, from the PSDB Party, has refused to provide police protection to the caravan. Richa became known internationally in 2016, when he ordered his police to open fire with rubber bullets on a crowd of  striking school teachers, injuring 200. Parana is the headquarters of the US-backed Lava Jato investigation, which has systematically ignored all corruption allegations against PSDB party members while trying to arrest Lula  on charges that he acquired a beach front apartment, with no evidence showing he ever owned or set foot in the place. Lava Jato director Sergio Moro has been accused of conflict of interest because his wife Rosangela served for years as legal council to Beto Richa’s vice governor Flavio Arns.