Eldorado is a small town in Sao Paulo’s impoverished Vale do Ribeira region which is surrounded by rainforest. Brazilian President Jair Bolsonaro lived there until he was 18 and his family is said to own over 70 different stores and businesses in the region. The President’s mother and several family members still live in Eldorado, and every time he visits the town, smartphone videos of him hugging childhood friends, greeting cheering crowds and drinking, mask-free in local bars surrounded by men viralize on the social media. 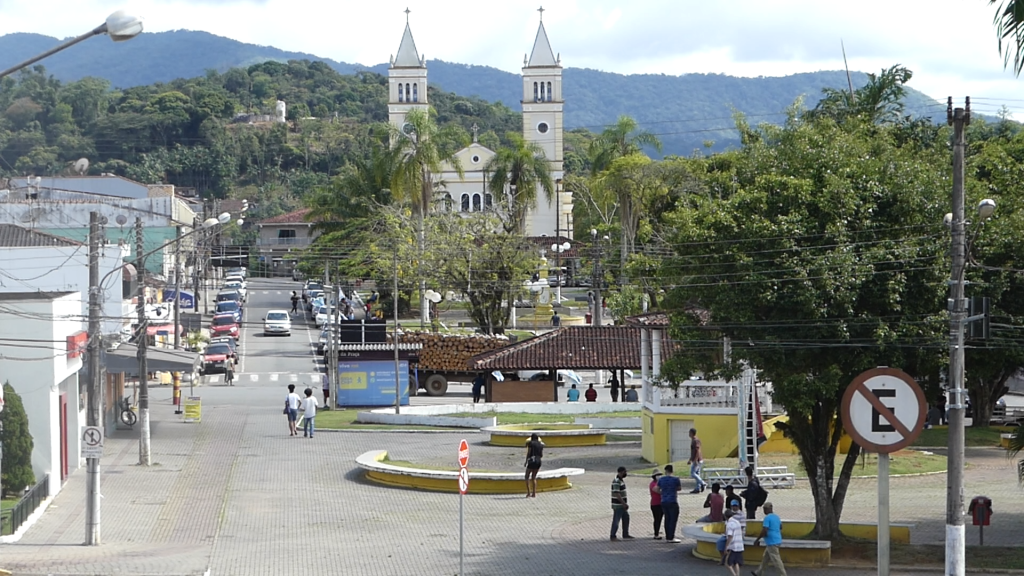 With all the attention given to his visits to Eldorado, any electoral victory for the “communists” (as he calls them) of the Workers Party (Partido do Trabalhadores/PT) would be a thorn in his side. But that is exactly what is poised to happen today, as voters go to the polls in 5740 towns across the country to elect mayors and city councilors.

Smartphone video of Bolsonaro arriving by helicopter in Eldorado

On November 13 I stood in front of PT headquarters next to Eldorado’s city hall speaking with an elderly Afro-Brazilian man who was volunteering for the campaign.

“I know Bolsonaro” he said, “his mother lives around the corner. She must be 90. I used to play football with him when we were young. He used to ride around on this motorcycle. He was OK until he joined the army – it really screwed him up.”

Eldorado was founded under the name of Xiririca in the 1600s during a minor gold rush and the town sprung up around a slave economy. Over the course of the years, many slaves escaped and formed maroon communities of free blacks in the forest, called quilombos. Today, the villages that sprung up from quilombos are called quilombola communities and the 1988 Constitution grants them similar land rights to those of indigenous reservations. Since he took office, Bolsonaro has repeatedly threatened to remove quilombola communities’ constitutionally guaranteed land rights.

Most Brazilian municipalities cover a much larger land mass than the boundaries of towns themselves, with large rural zones. The municipality of Eldorado has 12 quilombola communities located in its rural zone and its residents comprise around 20% of the electorate.

Today, 5 quilombola residents are running for public office in Eldorado’s municipal election on the PT ticket, led by mayoral candidate Dr. Oriel Rodrigues de Moraes, an organic farmer, lawyer and national leader of the quilombola rights movement, with 4 candidates for city council. Dr. Oriel is one of the front runners and although he may not win, they expect to elect at least 2 people to the 9-person city council. 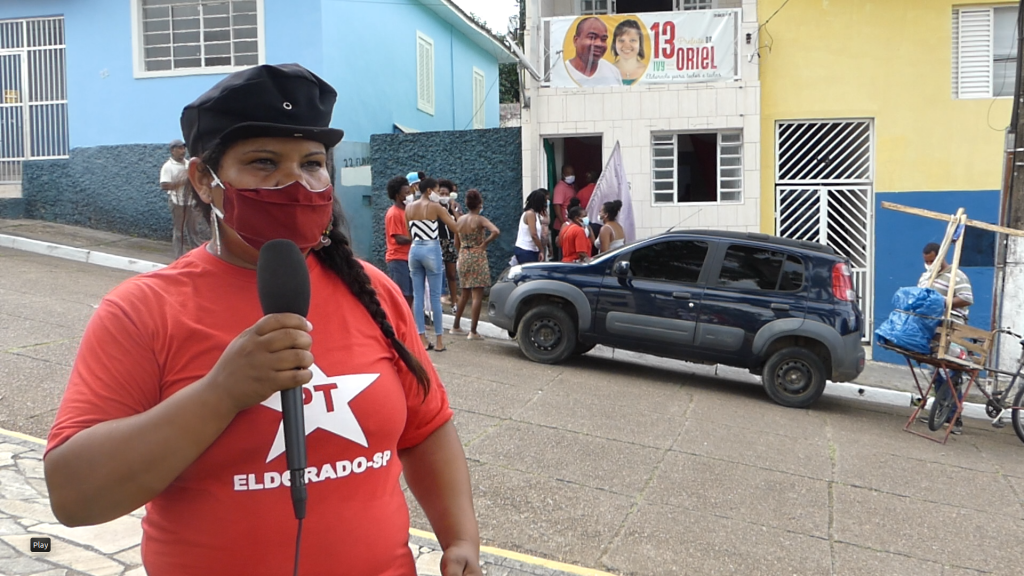 On November 13, as light rain fell over the Eldorado town square, I stood under a palm tree with Dr. Oriel.

“We’ve had a lot of journalists try to do stories about us,” he tells me, “but we usually say no because we are trying to avoid polarization. This is a small town.”

He told me about their 13 point electoral platform which includes things like participatory budgeting and other citizens control mechanisms over public spending, transformation to environmental sustainability and better integration between the town and countryside.

“This is first time in Brazil that a quilombola resident has run for mayor in a town where the family of a President lives. We are marking our territory and saying that we want an Eldorado that works for all of its citizens.” 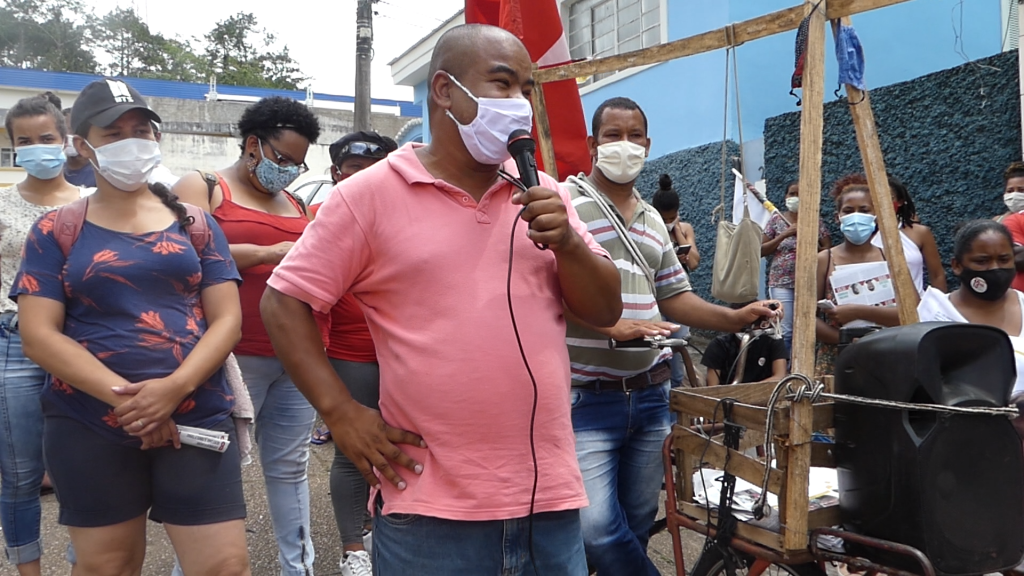 As I arrived earlier that morning I walked past dozens of bored looking youth, playing with their smartphones while holding up flags for different right wing candidates. The crowd that gathered in front of PT headquarters was more enthusiastic. People sang and danced to Dr. Oriel’s campaign jingle, sung by a woman who sounds a bit like Elza Soares, with a refrain which goes, “this is our land”. The crowd gathered behind a bicycle supporting a speaker system. Oriel grabbed the microphone. “Thank you all for coming. This is our last day officially campaigning,” he said, “so just relax and enjoy yourselves.” 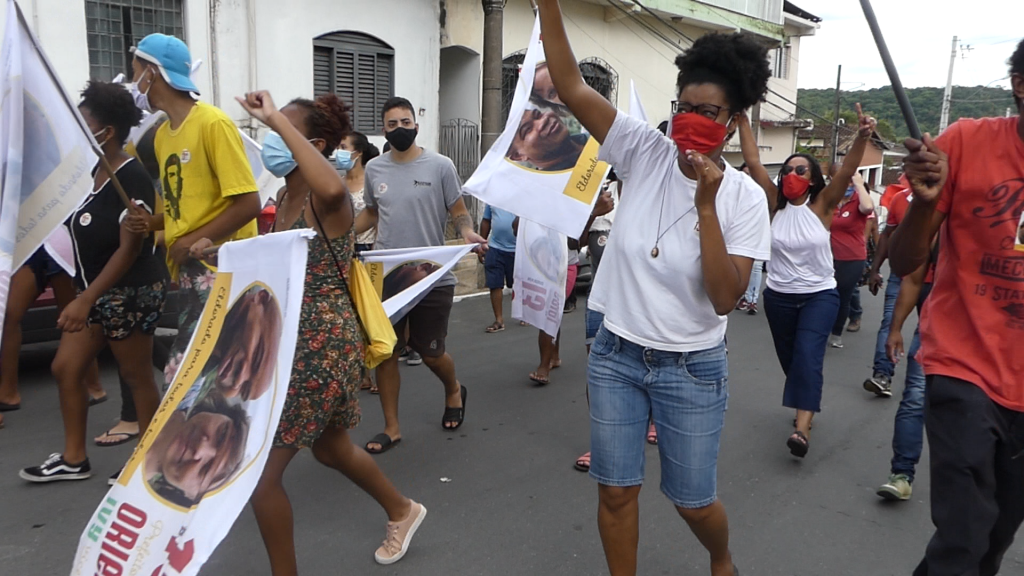 I fell in with the crowd and we were off, waving the traditional red PT flag with the white star, singing and dancing across the town square, around the catholic church, up a street and past the houses of members of the Bolsonaro family.

It’s a small town, and soon we were back in front of city hall again.

I was filming a news story for TeleSur and had to shoot a few sound bytes. I found Zeca and said, “I know you guys want to emphasize that you don’t want to polarize things, so would you like to come on camera and tell that story about how Bolsonaro was an OK guy before he joined the army?”

“Look,” he says, “I said he was OK. I didn’t say I liked the guy. We don’t want to polarize things before the election. Wait until we take power. Then you will see what we say about them.”