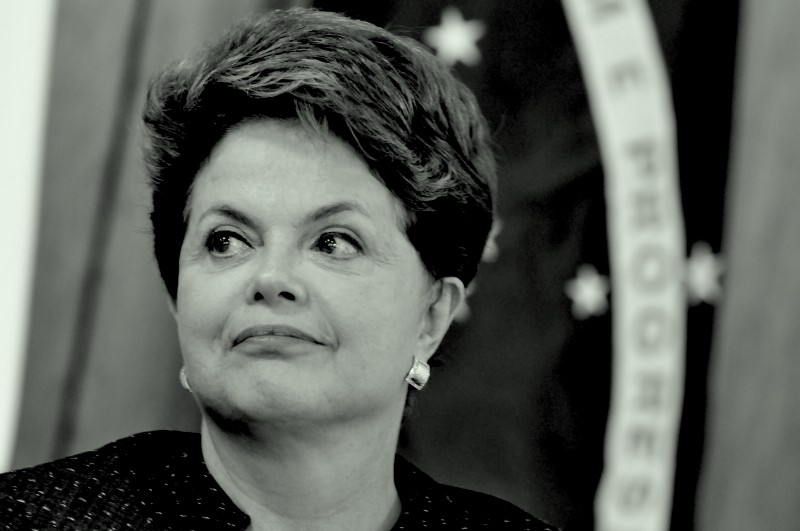 Greetings to ex-president Luís Inácio Lula da Silva, senators, federal deputies, party leaders, leaders of social movements, and to the women and men of my country.

Today the federal Senate made a decision that will enter history alongside its great injustices. The senators who voted for impeachment chose to tear up the federal Constitution. They decided to interrupt the mandate of a president who did not commit a crime of responsibility. They condemned an innocent woman and consummated a parliamentary coup.

With the approval of my definitive removal from office, politicians who have desperately sought to escape the arm of the judicial system have seized power, alongside the ones who lost the last four elections. They do not ascend to the government through the direct vote, like Lula and I did in 2002, 2006, 2010, and 2014. They have appropriated power through a coup d’etat .

It is the second coup that I have faced in my life. The first, the military coup [of 1964], supported with the violence of arms, of repression, and of torture, affected me when I was a young activist. The second, the parliamentary coup carried out today by means of a juridical farce, removes me from the office to which I was elected by the people.

It is indisputably an indirect election, in which 61 senators substitute the will expressed by 54.5 million voters. It is a fraud, which we will appeal at every possible level of the judicial system.

It is horrifying that the greatest effort against corruption in our history, made possible by actions developed and laws created since 2003 and deepened under my government, have wound up bringing to power a group of corrupt [politicians who are themselves] under investigation.

The progressive, inclusive, and democratic national agenda that I represent is being interrupted by powerful conservative and reactionary forces, with the support of a biased and venal press. They have seized the institutions of the state in order to place it at the service of radical economic liberalism and social regressiveness.

They have overthrown the first female president of Brazil, with no justification whatsoever.

But the coup was not carried out solely against me and against my party. This was just the beginning. This coup will indiscriminately attack any progressive and democratic political organization.

This coup is against social movements, against labor, and against those who fight for rights of any kind — for the right to work and the protection of labor laws; the right to a just retirement; the right to housing and to land; the right to education, to health, and to culture; the right of the youth to be the protagonists of their own history; the rights of black people, indigenous people, the LGBT community, and women; the right to demonstrate without being repressed.

I ask the Brazilian people to hear me. I am speaking to the more than 54 million who voted for me in 2014. I speak to the 110 million who validated direct elections as the way presidents should be chosen.

I speak principally to the Brazilians who, during my time in office, overcame misery, realized the dream of owning their own home, began to receive medical care, got into college, and stopped being invisible in the eyes of the nation, beginning to possess rights which had always been denied them.

The disbelief and the hurt that we feel at moments like this are not what you should allow to counsel you. Don’t stop fighting.

Listen well: They think that they have defeated us, but they are wrong. I know that we are all going to fight. There will be against them the firmest, most untiring, and energetic opposition that any government that comes to power by a coup can face.

When President Lula was elected for the first time, in 2003, we came to the government singing together that no one should be afraid to be happy. For more than 13 years, we successfully carried out a project that promoted the greatest social inclusion and reduction in inequality in the history of our country.

The story does not end like this. I am certain that the interruption of this process by the coup is not definitive. We will return. We will return in order to continue on our journey to a Brazil in which the people are sovereign.

I hope that we will know how to come together in defense of causes that are common to all progressives, independent of our party affiliation or political position. I propose that we fight, all together, against this step backwards, against this conservative agenda, against the revocation of our rights, for our national sovereignty, and for the full re-establishment of democracy.

I leave the presidency the way I arrived: without being guilty of any illicit act, without having betrayed any of my commitments, with dignity, and carrying in my chest the same love and admiration for the Brazilian people and the same will to continue fighting for Brazil.

I lived my truth. I gave the best I was capable of. I did not flee from my responsibilities. I felt the pain of human suffering. I was moved by the fight against misery and hunger. I combatted inequality.

I fought good battles. Some I lost, many I won. In this moment, I am inspired by Darcy Ribeiro to say, I would not like to be in the place of those who judge themselves victors. History will be implacable against them.

To the women of Brazil, who covered me in flowers and in affection, I ask you to believe that you [still] can. Future generations of Brazilian women will know that the first time a woman became president of the Republic, chauvinism and misogyny showed their ugly faces. We have begun building a one-way path to gender equality. Nothing will make us stop.

At this moment, I will not tell you goodbye. I am certain that I can tell you, ‘See you soon.’

In closing, I share with you some beautiful encouragement from the Russian poet Maiakovski:

‘We are not happy, it’s true
But what reason would we have to be sad?
The sea of history is agitated
Threats and wars, we will have to pass through them
Breaking them as we do
Cutting them like the keel of a ship.’

A tender embrace for all the Brazilian people, who share with me a belief in democracy and who dream of justice.