This year, May Day had an increased meaning for Brazil; that feeling was not only present on the streets of many cities around the country, but also during protests worldwide, as seen in Portugal, England, Switzerland and Italy, among others. The deepened significance of the date was related to the fact that the Brazilian’s most important political leader, a founder of PT, Worker’s Party, Luis Inácio Lula da Silva, is incarcerated, in Curitiba, since April 07th. Thousands of people marched in favor of Brazilian worker’s class, they wore masks with the face of the former president and demanded “Free Lula”, who is widely considered a victim of political persecution and of an arbitrary trial. The reason why those protests had relevant international outreach was the mobilization of Brazilians who live abroad and who formed groups to fight democracy overthrow in the largest South American country. The majority of them, activists, academics, journalists and people from different fields, united in 2016, during the process of impeachment of the president Dilma Rousseff. It was a collective response to what they had early recognized as a ‘parliamentary coup d’état’.

BRADO-NYC, based in New York City, was formed around this time and its founders took their concerns — brought up during discussions at universities or during informal hangouts — to the public. They chose Union Square Park, the space that held the first Labor Day parade, in 1882, as their main stage. The Brazilian culture is constantly embedded in this group’s acts and, along with protests which included criticism to the Summer Olympics games hosted by Brazil, in 2016, they performed ‘Sambas da Resistência’ (Sambas of Resistance), where the activists played instruments and danced. “From the beginning, one of our main goals was to reclaim our culture, including music, visual arts, folklore and every element we could use as tool to express our political resistance”, explained Mario Miele, a founder member. A notorious performance took place in front of the New York City office of Globo TV, which is part of the largest Brazilian media conglomerate. A tall man wearing a suit with a TV screen on his face was followed by zombie-looking people tied to him by cables. The intention was to portray an audience manipulated by mainstream media that takes advantage of a public concession to serve corporate interests. Most importantly, the protesters had the chance to expose that the media framing practiced by the most powerful Brazilian are followed by major international publications, news agencies and broadcasters. 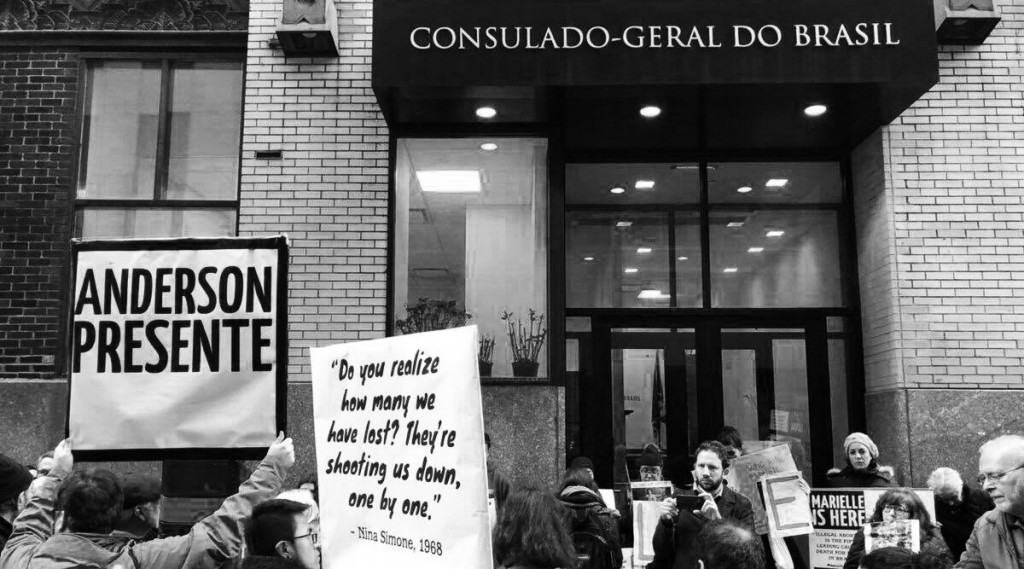 The same activists have been present at events, hosted in the United States, with politicians who have helped to engender the displacement of the Brazilian democracy. After some videos of the protesters questioning such politicians about their actions went viral, many other Brazilian authorities began avoiding the activists as if they were running from paparazzi. Brado also takes formal actions, such as creating petitions, writing letters to authorities, organizing debates and conferences around crucial topics involving the current political scenario and its possible consequences. Brado’s members know the relevance of their work as individuals who no longer live in their country of origin, but who want to help to raise awareness between the international community. “During the dictatorship in Brazil (1964-1985), vehicles like Globo TV did not give voice to intellectuals all over the word who were opposed to the coup. Now, the internet has changed it and our voices are vital to support Brazilians who live inside and outside the country”, said Marcelo Maia, a member of Brado-NYC. Counting with about 20 to 30 active members, the group hosts two monthly events. It frequently has other people who get involved and it reaches out to thousands through social media engagement.

Another group fighting for the same causes is the Brazilians for Democracy and Social Justice (Brasileiros pela Democracia e Justiça Social, BED). Based in Washington, D.C., it is formed majorly by women and it seeks to foster and strengthen the relationship between Brazilians and Americans interested in protecting Brazil from threats against democracy and the rule of law. BED has 12 members from diverse backgrounds and, similar to others, it has many collaborators. Focused on promoting events and on spreading information concerning facts that have impacted Brazilian politics, they helped to organize, in 2017, the events concerning Dilma Roussef’s schedule during a visit of the former Brazil’s president to the United States. The journalist Juliana Moraes, a founder member, recalled a special moment, in March of 2016, when many of the current members had met and that helped the group to shape its identity. They were singing, playing the Afro-Brazilian instruments berimbau and atabaque, and making requests to the diplomats who were watching from the windows: “It was an emotional late afternoon, we were about 70 people gathered in front of the Brazilian Embassy, in D.C. I remember that a family of right-wing Brazilian conservatives ended up joining us, after realizing that the existent process of impeachment was, in fact, a coup d’état.”

Other similar groups are Coletivo Curumim and Brasileiros na Suíça contra o Golpe (Brazilians in Switzerland against the Coup). The Brasileiros no Exterior Pró PT 2018 (Brazilians Abroad Pro-PT/Worker’s Party) comprises groups from United States, Portugal, Belgium, Italy and an upcoming one, based in Luxembourg. Social media, particularly Facebook and Twitter, are the activists main platforms, their work is also present in the independent media outlets. In order to give larger visibility to events and achievements pro-democracy, MDI-BR, Movimento Democratico Internacional (International Democratic Movement) was created to act as a core facilitator to activist movements with the intention to conceive and support ideas and actions capable of engaging the independent media vehicles and of inspiring collaborations with Brazil’s left-wing parties, especially the Worker’s Party. One thing that all those groups of activists have in common is a vibrant passion for Brazil; the ones who live temporarily or permanently outside their country seem to carry tireless hope and smiles. If the current political context reminds us of old bad plots, Brazilians are widespread shouting: ‘resistance!’.