Even after Twitter, Facebook and Instagram deleted president Jair Bolsonaro’s posts after determining their content spread “disinformation” and cause “real harm to people”, the president continues to propagate fake news about the coronavirus pandemic in speeches, on the streets, and online.

According to Leandro Tessler, from the Disinformation on Social Media Studies Group (EDReS) at Campinas State University, the spread of false content that originates from profiles belonging to the Bolsonaro’s and their allies count on a network of bots – robot users – that act by sharing the posts massively.

The interdisciplinary group comprised of researchers from various areas created a hotline – sort of a tip line – on WhatsApp to map and combat fakes news about the novel coronavirus on social media. Since the beginning of March, more than 8 thousand contacts and 30 thousand anonymous tips have been catalogued, which are being sorted by artificial intelligence and will later be studied to identify the motivations behind the content and their initial sources on social media. 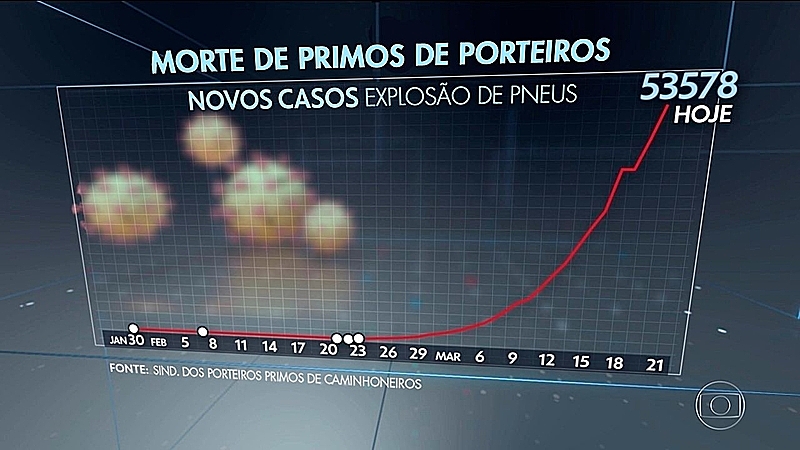 “Deaths of doormans’ cousins: New cases of exploding tyres”. Widely circulated online, this meme in the form of a graph pokes fun at the spread of fake news

Even before the final analysis of the data is complete, Tessler highlights that it’s possible to observe a direct link between political disinformation and the president’s speeches. “Recently, what I saw is that last week there was a lot on the “Chinese” virus circulating, saying this was a deliberate Chinese plan to bring down global financial markets, buy companies at low prices and take over the world. It’s like we’re in a cartoon”, he recounts.

The fake news mentioned by Tessler had its beginnings in a profile belonging to one of president Jair Bolsonaro’s sons, Congressman Eduardo Bolsonaro. The day following the post, originally published on March 18th, a report by Agência Pública identified 94,000 tweets and retweets – an average of 3 per second – by robot users on Twitter with the hashtag #ChineseVirus

Online attack on the Ambassador

Data compiled by Brasil de Fato, between the 27th and 31st of March, revealed the circulation of fake news suggesting the Chinese Ambassador had been “outed” by the Intelligence Services. The information was going around WhatsApp groups, but also made the rounds on Twitter, March 30th, aided by bots, totaling 139 tweets and 66 retweets among other engagement.

“This has lesser consequences, it will have the social consequence of racism and xenophobia. Regarding the coronavirus, there are some fake news that are extremely dangerous, that put people’s lives at risk. When the president tells people to leave their homes, because all is well as long as they’re not over 60, this puts people’s lives at risk”, commented Tessler.

Among the grave consequences of fake news, the scientist cites the president’s widely spread recommendation that people use hydroxychloroquine, or chloroquine, to treat covid-19, a medication that has no proven efficacy.

“There’s absolutely no evidence that supports chloroquine being used as a treatment, it has no proven efficacy treating those infected with the coronavirus. Having it work in a test tube, where you can put doses large enough to kill anything is one thing, but these aren’t doses our bodies can tolerate. The clinical trials we have up till now are either low quality or it’s that French one Bolsonaro likes to refer to”, explains Tessler, who as a scientist, has been following the situation and asserts there is interest on the part of the government in producing the drug.

In this sense, another one of the president’s sons, Rio de Janeiro Senator Flávio Bolsonaro, also spread fake news by posting a photo of a patient who had supposedly been cured using chloroquine. The lie was set straight by the patient’s family. It was a past hospital stay and no one in the photo had contracted the coronavirus at all.

The research into disinformation surrounding covid-19 showed that other videos and interviews with people supposedly cured by the medication, and supposed experts attesting to it’s benefits against the virus, are still being disseminated on social media.

The EDReS’ analysis discovered that the motivation behind the circulation of this type of fake news ranges from hardcore supporters wanting what the “president said to be true”, “to people who really wish for there to be cure and end up falling for it”, elucidated Tessler, who warns that misinformation propagated by bots has psychological effects on people.

The fallacy of vertical isolation

Videos of statements by businessmen and workers purportedly denouncing the problems caused by horizontal isolation (where all isolate), like truckers and street vendors, also pop up on the president and his sons’ social media accounts, as well as in those of the general population.

An example is a deleted video where a vendor talks to Bolsonaro on the streets of Brasilia. “We have to work, death is around the corner but let it be what God wants”, complains the seller while the president nods in agreement.

The content is in line with Bolsonaro’s statements on national television, calling for an end to the quarantine and contradicting the guidelines laid out by Brazilian scientific and healthcare authorities, as well as those of the World Health Organization (WHO).

Though having an apparent change in posture, in his last pronouncement, on Tuesday (March 31st), the president still managed to distort WHO head Tedros Adhanom’s discourse. Bolsonaro was trying to show that the World Health Organization’s chief agreed with him on not practicing social distancing.

“People go out on the streets and see that everything is normal, and don’t initially feel any symptoms. Then, along comes the president telling them they have to go back to work, that we need to win, that we only need to practice vertical isolation (where only high risk groups isolate) instead of having resources available to help people. What seemed to me like the best solution was the one approved by Congress. To delay such a measure as way to make people leave their homes and go back to normal, is disinformation in its purest form”, concluded Tessler.