For weeks, millions of Brazilians have been tuning into the televised, ongoing Senate investigation of alleged crimes committed by the Bolsonaro Government in the ambit of it’s disastrous Covid 19 response policy, which has left over 500,000 dead, as the net tightens around top government officials and the far-right President himself.

Among several scandals uncovered are a purchase order for 300,000 doses of Covaxin – the Indian vaccine developed by Bharat-Biotech which hasn’t completed 3rd phase testing yet, for 10 times its list price, from a shell company headquartered at a Singapore address which appeared in the Panama Papers.

There is growing evidence that Bolsonaro’s last Health Minister, General Eduardo Pazuello, and other military members of his staff, are involved in a kickback scheme involving millions of dollars of skimming from overpriced contracts and this is embarrassing the military, which has a long history of corruption during the sub-fascist dictatorship (1964-1985), which many of President Bolsonaro’s top cabinet members participated in.

On Wednesday, July 7th, right wing Senator Omar Aziz (PSD/Amazonas), who is leading the investigation, said, “The good guys in the Armed Forces must be very ashamed of some of its members who are being mentioned in the media today, because it’s been a long time, it has been many years since Brazil has seen representatives of the bad side of the Armed Forces involved in deceit within the Government.”

Within hours, President Bolsonaro released a written response signed by Defense Minister General Braga Netto and the leaders of the 3 branches of the armed forces. 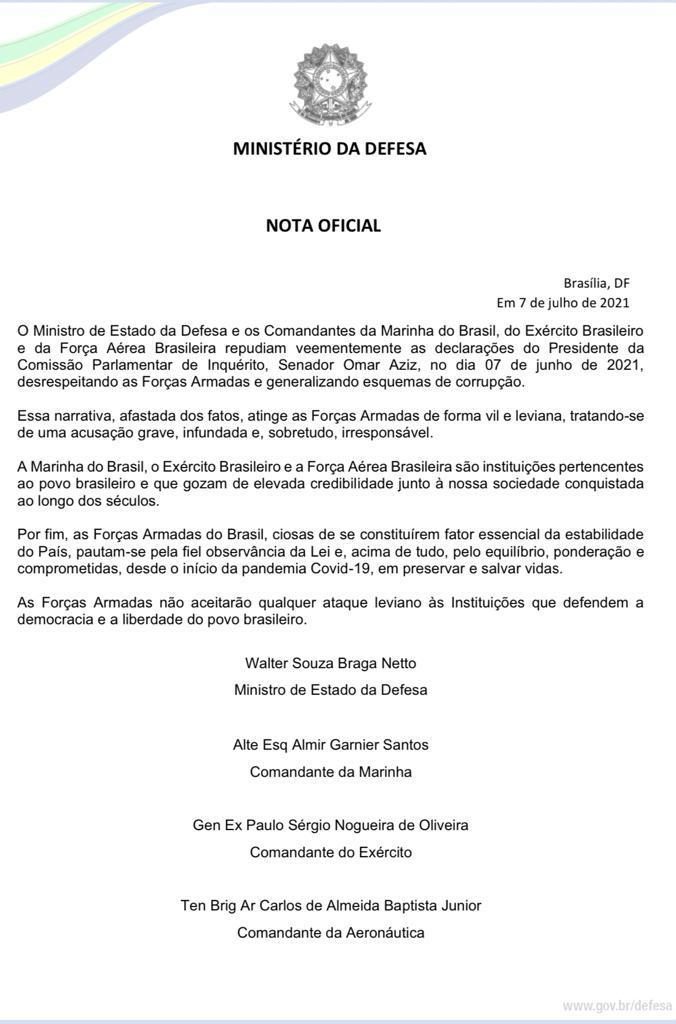 “This narrative,” it says, “devoid of facts, damages the Armed Forces in a vile and frivolous manner. It is a serious, baseless and totally irresponsible […] the Armed Forces will not accept any frivolous attack on the institutions that defend the democracy and freedom of the Brazilian people.”

After releasing the letter, top members of military brass told Brazilian Journalist Bella Megale that they will treat any further calls for testimony from member of the Military in the Senate investigation, “more harshly.”

Prominent members of the senate spanning the political spectrum were quick to interpret the statement and comments as threats, remembering that on the eve of the Supreme Court ruling on whether an exception to the Brazilian constitution should be made to enable the imprisonment of former President Lula before his appeals process tried out, General Vilas Boas threatened the Supreme Court. On the day of that vote, a visibly shaken Minister Rosa Weber announced she would vote against her personal opinion in the matter and cast the tie breaking vote to enable Lula’s arrest.

On Twitter, Congressman Allessandro Molon (PSB/Minas Gerais) said, “When the Armed Forces get involved with a government, which they shouldn’t, they have to answer for it. Afterwards, it’s no use complaining about criticism, much less trying to control the speech of congressmen. This is definitely not the role of the Armed Forces.”

Senator Rogério Carvalho (PT/Sergipe) tweeted, “This letter by the Ministry of Defense is untimely and inadequate. It attempts to interfere and intimidate the Federal Senate, a secular institution that represents the Brazilian Federation and the Brazilian people.”

In response to the note from the Military, Senate investigation director Omar Aziz said, “I am going to reaffirm what I said in the investigation. They can write 50 notes against me if they want to, just don’t try to threaten me.”

The Bolsonaro government currently includes over 6000 active and reserve members of the military, more than during later years of the dictatorship.