On May 25 leaders of the Koch brothers-associated organization Movimento Brasil Livre met with Senator Alvaro Dias from the PSDB party to talk about their goal of impeaching president Dilma Rouseff. Some found it ironic that a group that calls itself “the Free Brasil Movement” met with a former military dictatorship official to talk about plans for a technically illegal impeachment attempt.

Dias, like 21 of his other colleagues in the senate, was an actor in the neo-fascist military dictatorship of 1964-1985, serving as an alderman, congressman and senator. The fact that 27.5% of current Brazilian senators collaborated with a corrupt and bloody military dictatorship is one example of the complexities of governing this huge country. In a multiparty system where only 16% of the current senators represent the governing PT party, it has proven impossible for any president to form a congressional majority coalition without involving former dictatorship officials.

Unlike other governments in Latin America, Brazil gave amnesty to everybody involved in its military dictatorship (1964-1985). As General Figueiredo opened up local elections in the waning days of his government the two official military parties changed their names. ARENA became PFL and eventually DEM. MDB became PMDB. Together they formed a majority block in the post dictatorship House and Senate until 2003 when Lula became the first president to form a governing coalition without PFL/DEM.

The Brazilian neofascist military dictatorship, propped up by both the US Government and the World Bank, has developed a reputation in the anglophone world as milder than those of it’s neighbours. It is common to see the number of victims cited as in the hundreds, compared to thousands in Argentina and Chile. This take shows a lack of understanding of Brasilian race and class issues. Although the government now officially admits that hundreds of political prisoners were assassinated, these numbers refer primarily to middle-class whites. State massacre and torture of thousands of Afro-brasilians, peasants and indigenous peoples that took place during the regime is not considered “political” and therefore not traditionally included in the casualty figures.  Human rights atrocities like the murder of 2000 members of the Waimiri-Atroari indigenous tribe, mowed down by machine gun fire while the military “cleaned” their territory for highway construction, are not usually included in the political murder tally.

The dictatorship was marked by incredible levels of corruption, human rights abuses and nepotism. Nobody was ever punished and the fact that former actors from this dark era in Brazilian history continue to wield so much power helps explain why there are still so many problems with corruption and human rights abuses in Brasil.

Both former official dictatorship parties, PMDB and PFL/DEM,  played major roles in the Sarney, Collor, Franco and Cardoso presidencies. Fernando Henrique Cardoso’s vice president, Marco Maciel, was president of Congress during the 1970s before being appointed  governor of Pernambuco by General Geisel.

When Lula Inacio da Silva took office in 2003 the PT party gained around 15% of the house and senate seats and were forced to form a coalition to govern. Lula became the first president to break with PFL/DEM but as part of the cabinet negotiations Lula handed over the powerful Ministry of Mines and Energy to General Medici’s former Minister of the Interior Edson Lobão, one of the leaders of the PMDB.

No current senators in the PT, PC do B, PDT or PSOL parties ever served in public office during the military dictatorship but the opposition PSDB, which has historic ties to the pro-democracy movement, is more problematic. Last year’s presidential candidate for the PSDB, Aécio Neves, was appointed chief of staff by his congressman father, Aécio Cunha, in 1977 when he was 17. 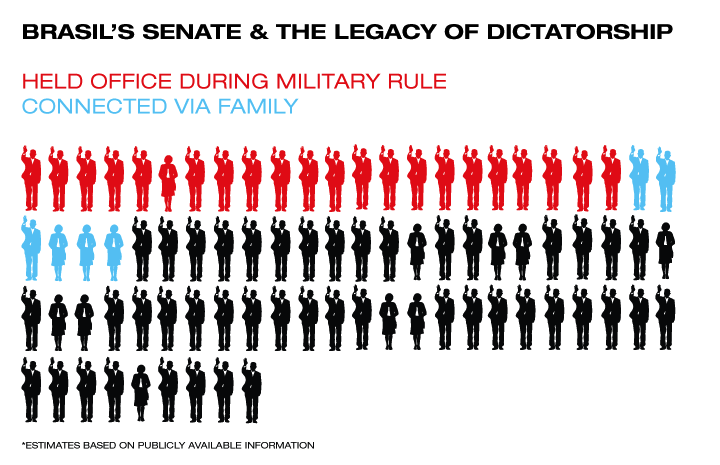 In addition to the 22 current Brasilian senators who occupied public office during the military dictatorship, there are other cases of children and wives of former dictatorship actors. Maria de Carmo Alves‘ husband was appointed Mayor of Aracaju during the 1970s. Ciro Nogueira and Cassio Cunha Lima, who was thrown out of office three times for electoral fraud,  are both sons of former ARENA congressmen.

The Senate is just one example of a space where former dictatorship officials continue to wield power. There are hundreds of other examples of federal and state congressmen, governors, mayors and city councilmen who collaborated with the dictatorship. Then there are the media companies who propped up the dictatorship, like Rede Globo, whose journalism director in Brasilia, Alexandre Garcia, was General Figueiredo’s press secretary.

All of this information is readily available to the public and nobody denies their involvement. So why isn’t it mentioned more when anglophone journalists and pundits try to explain corruption and human rights issues in Brasil?