Latest U.S. government visit is further evidence that the Biden administration has no qualms about supporting Brazil’s far-right military-dominated regime.

US President Joe Biden’s National Security Advisor Jake Sullivan visited Brazil on Thursday and gave a positive start of an agenda between the United States and Brazil, although in the past many believed in there must exist an animosity between Bolsonaro and Biden, because of the Bolsonaro clan’s explicit support  for Donald Trump.

Regardless, the Americans arrived with good will toward Bolsonaro, and at the same time red flags have being raised due to their plans for several Latin American countries.

A prominent theme at the lunch hosted by Chancellor Carlos França was the political situation in Latin America and the Caribbean.  The representatives of both countries spoke not only about Cuba, Venezuela and Nicaragua, but about each of the region’s neighbors and defended “the need to preserve and protect democracy in the hemisphere”. The current situation in the region was also discussed in a morning meeting with Generals Augusto Heleno and Defense Minister Braga Netto. It is the second time in a month that a top US government official has approached the Bolsonaro government to show concern for anti-imperialist popular movements in Latin America, during a visit by CIA Director William J. Burns in July, Bolsonaro himself admitted that this topic had been discussed.

After an increase in US aggression toward Latin America, it is not surprising that the Biden government seeks an alliance with Bolsonaro, who has already been implicated in the 2019 coup in Bolivia, the aggression against demonstrators in Chile and several gratuitous aggressions against the Argentine president Alberto Fernandez and the Venezuelan government.

In addition to regional interference, Biden’s envoy came to Brazil to try to undermine China’s advance in the telecommunications sector.

The US wants China to stay out of the 5G auction, which will take place later this year. The mission headed by Sullivan discussed the matter with Brazilian authorities, including ministers Fábio Faria, from Communications, and General Augusto Heleno, from the Institutional Security Office.

The US has been campaigning worldwide against the use of Chinese equipment. However, the Brazilian telecommunications sector is said to be against the barring of Chinese companies.

Sullivan’s delegation doubled down on a Trump-era pledge to make Brazil a NATO ‘global partner’ member, on condition that it rejects Chinese Huawei and adopts the US model for its 5G network. 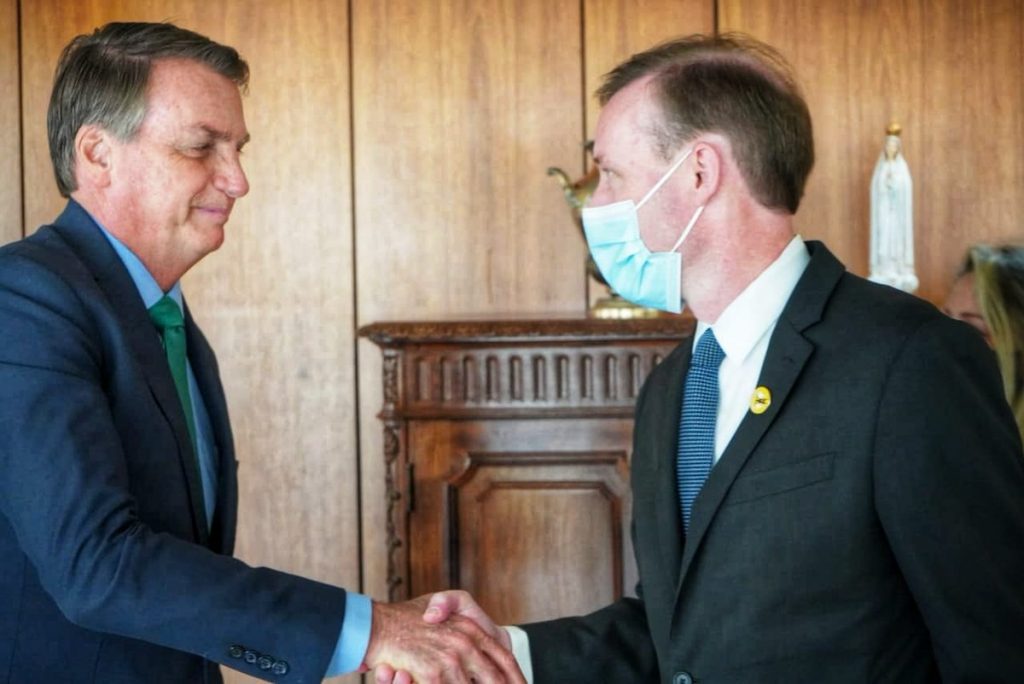 Among the topics discussed, however, despite not having been predominant at the meeting, was the concern of the Americans with the tension between the Executive and the Judiciary powers, as a result of Bolsonaro’s attacks on the electronic ballot box, on the Superior Electoral Court (TSE) and members of the Federal Supreme Court (STF).

The US delegation sees a similarity between Bolsonaro’s campaign and that carried out by former US President Donald Trump, who was defeated in 2020 by Biden and encouraged a campaign to denounce an alleged electoral fraud, leading to the invasion, in January of this year, of the US Capitol.

Despite this, they reiterated the US support for the Brazilian candidacy to the OECD and signalled a partnership on the environment not only with the federal government, but also with state governors.