Rio de Janeiro Carnaval parade groups, called Samba Schools, are preparing social and political criticism for the 2018 carnaval, with parades that will denounce politicians, social problems and recent political scandals. Of the 13 most important Samba Schools, 4 will focus on protests during their parades in the Rio Samba stadium, the Sambadromo.

With the theme, “My God! My God! Is slavery extinct?”, Paraiso de Tuiuti will remember the 130 years since slavery was abolished (in 1888) through criticism of the recently approved labor law reforms, which, according to the group, represents a modern form of servitude. The final parade section will present the costume of the “Warrior of the CLT”. The CLT is the nickname for the Brazilian labor card, a right to all citizens which was created after the first labor rights legislation in Brazil was consolidated in 1940. Many of these rights were eradicated with the Coup government’s recent labor reforms. “Already overloaded with various tasks, the worker tries to protect himself from the bosses exploitation. In his defense, he uses his labor card, which is transformed into a shield in our parade,” says Tuiuti’s costume designer Jackson Vasconcelos.

In another parade section, the paraders wear an inflatable duck around their waists referring to the giant inflatable duck which became a symbol of the conservative protests in favor of Dilma Rousseff’s impeachment in 2016. The costume also includes a large hand, suggesting that the protesters were being manipulated. “The figure is a criticism of the manipulation that took place when the poor protested in favor of maintaining the historic system of social exploitation. In otherwords, they are puppets of a dominant class which dictates the rules,” says Vasconcelos. In Tuiuti’s last float, there will be a man dressed as a vampire representing president Michel Temer. 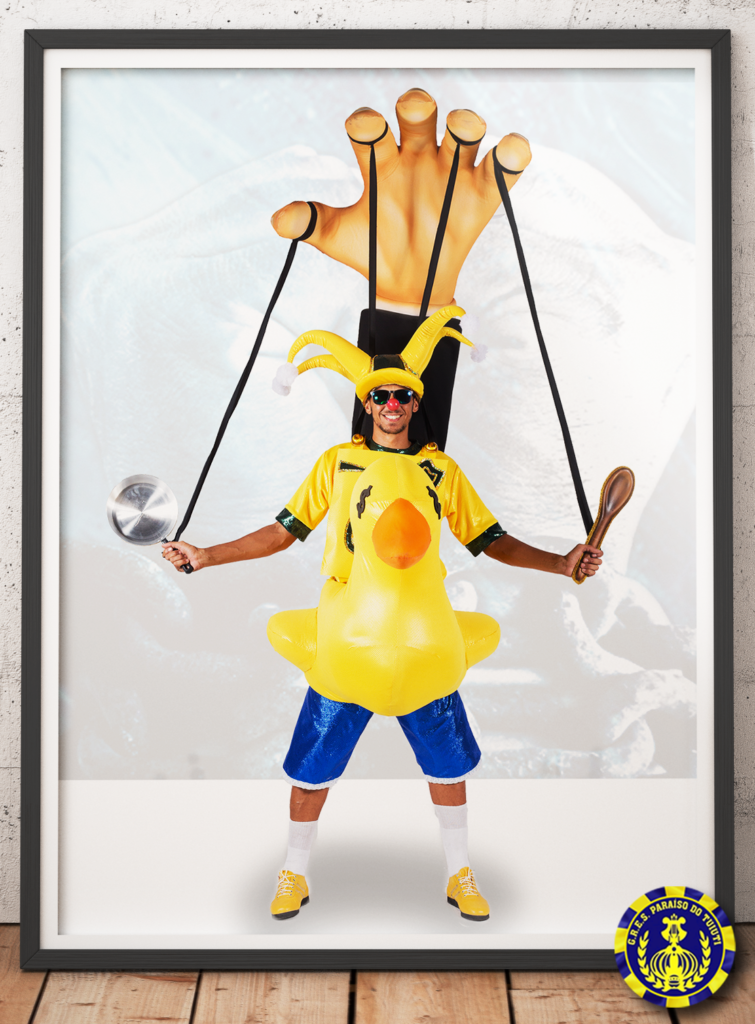 Estação Primeira da Mangueira, one of the oldest and most traditional samba schools in Rio, is parading with the theme, “With or without money, I’ll play”, as a direct provocation to Mayor Marcelo Crivella, who cut public funding to carnaval by 50% this year. Crivella announced the cuts alleging fiscal austerity, but many of his critics see religious motives behind it, since he is also a bishop of the prosperity-focused Universal Kingdom of God church, which uses biblical dogma to classify carnaval as a “diabolical party” associated with “idolatry”, “witchcraft” and “libidinous acts”.

Mangueira has created a parade celebrating the cultural manifestations of the street which depend on little or no financial support. For the designer of the parade, Leandro Viera, the theme also criticizes the samba schools, which have begun to invest in more and more expensive and luxurious parades, distancing themselves from their neighborhood roots. “For a long time, there has been a feeling that Carnaval has been watered down to transform itself exclusively in entertainment, and with this it has withdrawn from the population. By looking at the mayor’s position, we found a way to satirize carnaval itself. This theme was developed to embrace the sambista. The mayor is trying to implement a conservative agenda in the cosmopolitan city of Rio de Janeiro.”

The Mangueira parade will commemorate carnaval street blocos, samba jam sessions, bars, Afro-Brazilian altars and food offerings, the GLBT parade and dancers who wear costumes that criticize the political class. In other words, as Leandro Vieira says, “everything that Mayor Crivella doesn’t like”. One parade float will feature an image of the patron saint of Brazil, the black Virgin Mary, Our Lady of Aparecida, whose image was kicked over on an evangelical TV program during the 1990s by a pastor associated with Mayor Crivella. Another float will feature a bare-breasted statue of pioneer Brazilian drag queen Laura de Vison (1939-2007). The school also promises to feature a giant statue of a cellulite-ridden ass with a tattoo on it that says, “Crivella”.

Beija Flor will extend its protest to Brazil as a whole, making a parallel between the horror novel “Frankenstein” by Mary Shelley, which will celebrate its 200th anniversary since first publication in 2018, and the political moment in the country. With the theme “A monster is someone who doesn’t know how to love: the children abandoned by the nation which birthed them”, it denounces things like corruption, social inequality, unemployment, environmental destruction, religious intolerance, and homophobia.

Beija Flor will tell the story of Dr. Frankenstein’s monster, a being created in a laboratory with pieces other people, crudely sewn together, who was not recognized as human due to his abnormal appearance and rejected by his own creator. The headquarters of Petrobras, a company targeted in the lava jato investigation and Maracana stadium, which received overpriced reforms, will be represented on floats developed by choreographer Marcelo Misailidis and designer Cid Carvalho. The theme song is already one of the most popular of the season, with verses such as, “Beloved homeland, where are you going? You children can’t take it anymore!” and “Greed wears a suit and tie, where hopes die”.

In Portela, another historic school, the experienced designer Rosa Magalhães, who has one the most titles of anyone currently in activity in Rio, created the theme, “Suddenly, from here to there, from there to here” about a group of Dutch Jews, exiled by the inquisition after Portugal conquered the northeastern state of Pernambuco from Holland  during the 17th Century, who immigrated to the United States and helped found New Amsterdam, which later transformed into New York. The parade will feature Mohamed Ali Kenawy, a Syrian refugee who suffered xenophobic attacks when he started peddling on the streets of Rio in August 2017.

Portela’s parade will honor immigrant workers and protest against xenophobia and ethnic and religious intolerance. It will reference the European refugee crisis and controversies involving US president Donald Trump’s persecution of immigrants. Portela’s official program for the 2018 carnaval states that, “starting from this adventure, Portela will deliver a humanitarian message against discrimination, religious persecution and all sorts of attacks against the diversity of peoples”.

With all of this engagement in the heart of Brazil’s largest cultural spectacle the 2018 Rio de Janeiro Carnaval parade, which will happen on February 11 and 12, looks to be the most politicized in decades.

The Neocolonial Game Behind Musk-Bolsonaro Rendezvous

Since the return of Brazil's military to government in 2016, it's objectives, and desire for permanence of its political project far beyond current frontman...
ARMED FORCES

Until recently US lawmakers and officials had warned of "democratic decline" in Brazil. Now emerges a new official insistence that the coming election will...
ARMED FORCES

Monica Bergamo reports in Folha de S.Paulo newspaper that UN Special Rapporteur for the Independence of Judges and Lawyers, Diego Garcia, received a document on...
AMAZON

US-based South African billionaire Elon Musk's visit to Brazil has generated enormous controversy and suspicion, as reported by BRASILWIRE. It is now revealed that...
Facebook
Twitter