On Twitter, Dilma Rousseff, the former Brazilian President who was deposed in the 2016 Coup, called the electoral victory of the Alberto Fernández/Christina Kirchner ticket in the Argentinian presidential primaries a “light at the end of the tunnel” for Latin America.

“Alberto Fernández/Cristina Kirchner’s victory in the Argentinian presidential primaries is a light at the end of the tunnel for the Argentinian people and for Latin America. It is a huge encouragement for everyone who is fighting for democracy. It is an encouraging triumph of progressive forces over neoliberalism,” said former Brazilian President Dilma Rousseff, who was deposed in the 2016 coup.

The progressive slate, led by Alberto Fernandez, received 47% of the vote, representing a definitive victory over US-backed neoliberal Mauricio Macri with 32%. After taking power in 2015, Macri embarked on a series of crippling austerity adjustments which were applauded by President Obama and the US media, but caused the value of the Argentine Peso to drop by 50% and plunged 32% of the Argentine population below the poverty line.

Christina Kirchner, who has been the victim of conservative lawfare attacks similar to those launched against left leaning former presidents Lula, Dilma Rousseff, Michelle Bachelet and Rafael Corriea, made a last minute tactical decision to run as Vice President on the ticket with Alberto Fernandez, her former Chief of Staff.

The final election round, between the two most popular candidates, will take place on October 27th. 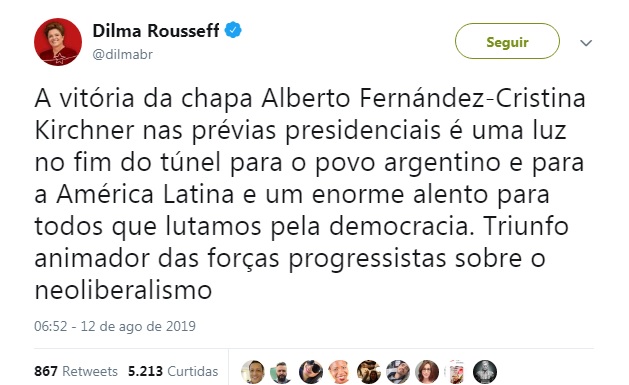