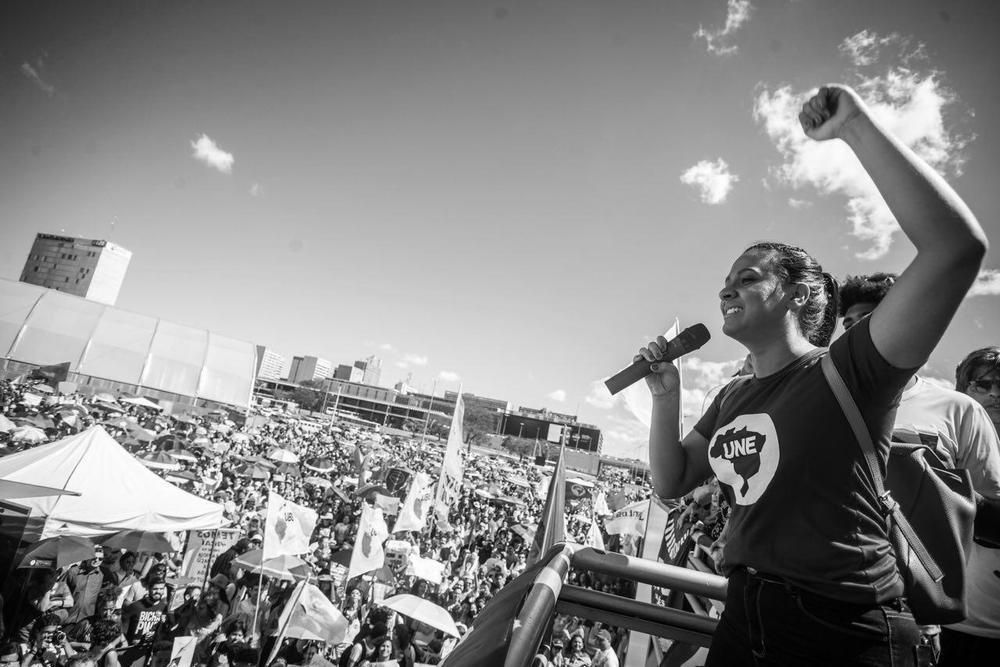 The president of the UNE, Iago Montalvão, argues that there is no way to improve the program itself, called Future-se (“Futurize Yourself”). “Its essence is about attacking the public university system,” he said.

Montalvão, an Economics student from the University of São Paulo, points out that student organizations must defeat the program in Congress, because “if the legislation is passed, the government will start to pressure university presidents, intimidate them, or even appoint new officials in order to implement the project […] Our strategy is, first, to keep mobilizing on the streets to overturn the [education budget] cuts, but we are also mobilizing lawmakers and social movements, professor unions, association of university presidents. All that is part of the organization process.”

Introduced on Jul. 17 by Brazil’s Education minister, Abraham Weintraub, and still surrounded by questions, the Future-se program establishes that social organizations will be able to directly run universities, including managing their funds and staff.

A statement published online by the Education Ministry reports that a managing committee “will define the criteria to accept certificates in order to take part in the election process for university president,” which some believe means that these organizations would actually be able to nominate the heads of universities. The government has yet to clarify what it actually means.

The announcement of the Future-se program has sparked negative reactions by university presidents and associations of professors of federal higher education institutions in Brazil. A general strike is being called by education activists on Aug. 13.

Gabryel Henrici, a History student at the Federal University of Rio de Janeiro and the first vice president of the UNE, says Future-se is a “dangerous” project that could mean the end of university autonomy.

“You hand over estate and scientific assets, create a fund at the service of major private banks and private capital companies, and put the very public character of universities at risk,” Henrici says.

The student activist argues that there is contradiction in the government cutting university budgets and then presenting a “solution” that requires private funds.

He also claims that pressuring the Brazilian Congress will be important, but not the most crucial struggle.

“We must win society over to defend a project for public university they [the government] are trying to destroy. That is the crucial pressure. If we just focus on the Congress, we tend to lose,” he adds.

On August 4th, the UNE and 186 student organizations released a statement against the Future-se program, underscoring that it is a covert attempt toprivatize public education in Brazil.

In the statement, the organizations accuse the government of promoting “ideological persecution and spreading hatred and lies against universities, federal institutes, schools, teachers, professors, and students.”

This article originally appeared in Brasil de Fato, was edited for readability and can be seen in its original format here.