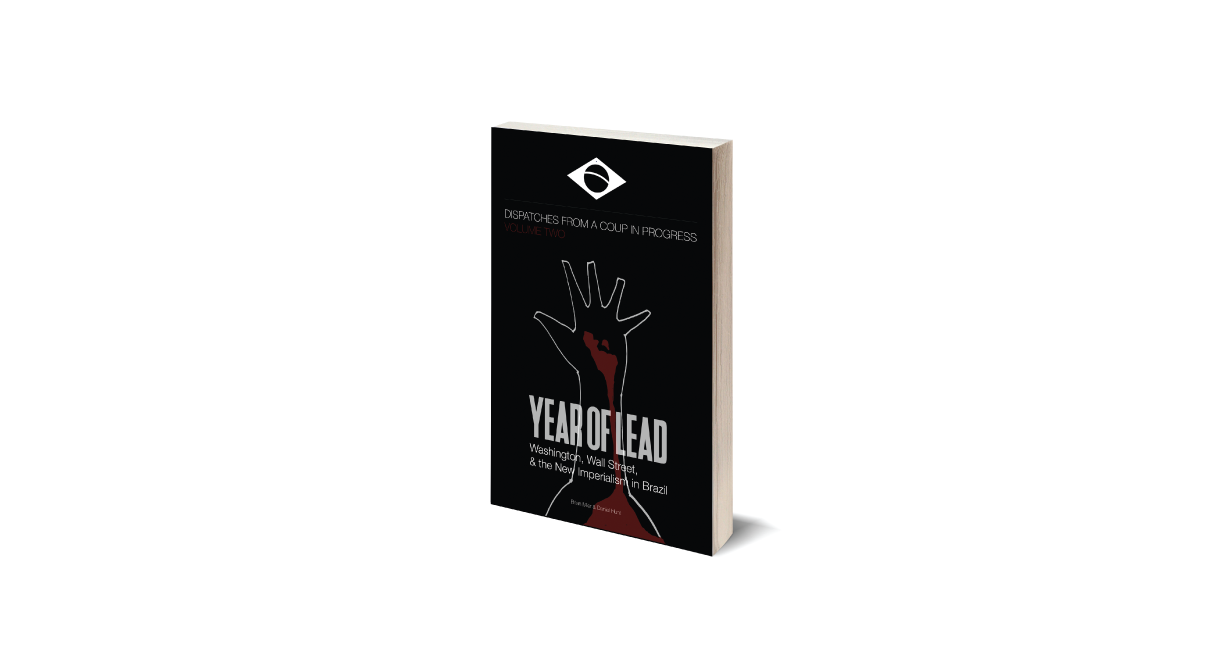 Brasil Wire is proud to announce the launching of its new book, Year of Lead: Washington, Wall Street and the New Imperialism in Brazil, an anthology of articles about the threats to the country’s sovereignty, Lula’s political imprisonment and the rise of Jair Bolsonaro written by 20 authors.

Over the past year I’ve covered Brazil, the Workers Party, the rise of Jair Bolsonaro and the political imprisonment of Luiz Inácio Lula da Silva extensively. I’ve done this for several reasons. First, Brazil, like any other place in the World, matters in and of itself. It has many great activists, voices on the left, powerful examples of leadership and organizing that are almost never given any attention in any form of English language press, let alone the constant failures of prestige outlets like the New York Times, Washington Post and Guardian to even report the story emanating out of Brazil over the last several years properly and objectively, in particular, the judicial coup that removed Dilma Rousseff from power in 2016 and the lawfare against and imprisonment of Lula da Silva without any material evidence. Lula is an iconic and presidential historical figure whose barring from the 2018 race made Jair Bolsonaro’s fascist ascendency an almost certainty in retrospect.

I also find Brazil to be a powerful case study on how far right wing politics works in today’s World and the misuse of corruption politics as a doorway for the fascist far right to take power. Even in the United States Trump’s “drain the swamp” message, which favored vague and generalized complaints about corruption instead of a system-wide critique of capitalism, is easily harnessed by far right figures to delegitimize left wing activists, unions and left political leadership. This was taken to an extreme in Brazil, where the sprawling Lava Jato investigation, which of course identified some stories of significant corruption in what is a highly corrupted political system, was weaponized by the future fascist Justice Minister Sérgio Moro in an effort to destroy the Workers Party and imprison and silence Lula da Silva.

Lula is also a major part of the story for me as anybody who follows my show knows. First, because Lula has an incredible record. At a time when George W. Bush was President and the Pink Tide was ascendent, Lula stood as a giant in international relations, respected across the globe and, most significantly, raised 40 million Brazilians out of poverty, eliminated hunger and struck an independent course in Brazilian foreign policy. This is a world unlike today where on the negative we have to deal with rising global fascism, from Trump to Bolsonaro or Narendra Modi but on the other hand there’s a great counter-backlash of inspiring social democratic leaders like Bernie Sanders, the Democratic front runner. Lula governed with support in Latin America from the Pink Tide, but besides that, in a global landscape dominated by neoliberals and the far right, Lula still managed to be universally respected and achieve extraordinary things. The treatment of him is a travesty and his political imprisonment should concern everybody who cares about justice, human dignity, democracy, and also just the relentless persecution and abuse of a good person or any person for that matter. So understanding the tactics of lawfare, the misuse of corruption as a tool to elevate far right politics and the ways in which the extremes of Brazil’s situation reflect and parallel our global predicament is essential.

Brasil Wire is the essential resource in following this story and the work that they do as a small independent website is unparallelled in almost any reporting coming out of the country into the English language press. First, because the writing, analysis, historical assessments and political understanding is always sophisticated, top notch, incredibly smart and reflects a leftist but also grounded and bottom up view of politics. Also, Brasil Wire gives voice to actual Brazilian activists, leftist intellectuals and politicians who are almost never given any sort of forum in the English language press. The Workers Party and the Landless Workers Movement and other great political parties and social movements in Brazil, are not only important to understand the Brazilian crisis, but like all other aspects of the Brazilian story, have many things to teach everybody working towards a more just post-imperial, post-capitalist politics anywhere in the World. Brasil Wire forwards these stories and these voices. Thirdly they get all the major stories right. If you were reading Brasil Wire you knew the truth about how the case against Lula was working. You would not be surprised to see that Judge Sergio Moro is no caped crusader but instead a deeply right wing, deeply vindictive and almost certainly corrupted individual who would go on to serve in this extreme far right, human rights violating, democracy canceling government. You also would know that Jair Bolsonaro would prove to be, in addition to being US and corporate subservient and incredibly dangerous, a buffoon and jackass who would do things like tweet out a gonzo pornography video from an official presidential account. If you were reading Brasil Wire you would have the right voices in your mind, the right understanding, and a sense of what was happening from the ground up – the only ways to build real and actual solidarity. This is why I am proud to write the forward to this book, proud to continue to work with the whole Brasil Wire team, and suggest not only that everybody purchase this but spread it far and wide. I wish to honor the memory of Marielle Franco and, of course, Lula Livre!