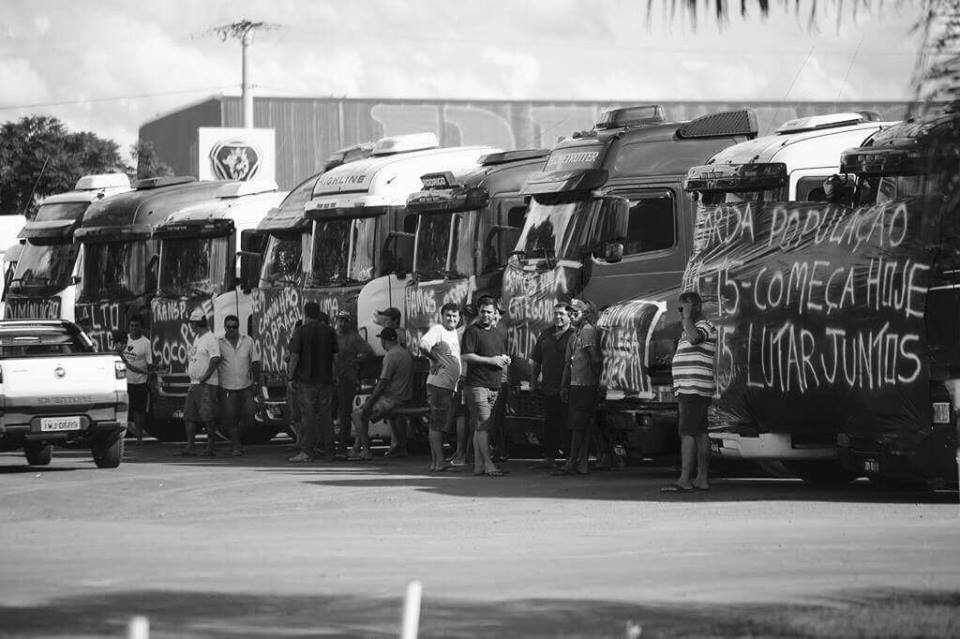 Truck drivers tend to be conservative, but their demands are fair. About the coup, Petrobras’ price policies meet investors wishes but don’t serve the needs of the nation.

Note: Petrobras is commonly referred to in the media as a state oil company, but it was partially privatized during the Fernando Henrique Cardoso administration and currently has mixed ownership with majority state control. In the following article the economist Paulo Kliass argues that the roots of the current crisis are in the the Temer government’s prioritization of foreign investors over national sovereignty.

The history of certain social categories’ political and demand-based movements shows conservative or backwards tendencies. Disguised as protests against sectoral policies, these movements often end up fooling public opinion and provoking wider political crises. In general, truck drivers’ strikes tend to be a characteristic example of this confusing scenario. Perhaps the most dramatic of all was the role this sector played in Chile on the eve of the coup that took down the Salvador Allende government.

Studies by historians have confirmed the deep ties existent at the time among leaders of the famous owner-led lock out in October 1972, the forces organized by the CIA and representatives of the bourgeois and business opposition to the Popular Unity government. In mixing interests of cargo companies with autonomous truck owners, that strike deepened the generalized scenario of scarcity in the country and deepened the political crisis that culminated with the assassination of the president and the military takeover.

In our neighbor, Argentina, this professional category is also well organized and has had successive victories due to its capacity to pressure governments. The regular mobilizations occur almost annually and do not normally spare the occupants of the Pink House, whether Cristina Kirchner or Macri, to speak only of the most recent.

This week Brazil witnessed another chapter in the organized highway cargo transport sector protests. The objective basis for the movement resides, obviously, in the Temer government’s low popularity rate and its disastrous management of the political economy. In concrete terms the cause is the energy strategy, especially the government’s Petrobras policies.

In nominating the PSDB Party politician Pedro Parente as president of the largest Brazilian business conglomerate, Temer did much more than simply generously thank the Party for supporting his takeover of the presidency and its decisive role in the “coupeachment”. The bigger goal was to start a privatization process for this state giant that plays a major strategic role in the Brazilian economy and society. With this in mind, the new director immediately began to implement a path of “divestment” in the company. In truth, this is a pompous and misleading term to describe the objective procedure of selling the state conglomerate’s assets to the private sector. In clear English, the most adequate term to describe this crime against the national economy is “privatization”.

Furthermore, Parente was given an impressive amount of autonomy to generate the fatal changes to the extraction process of the extremely valuable pre-salt offshore reserves. Attending the pleas of the big foreign petroleum companies, the government ended Petrobras’ exclusive rights to organize oil and natural gas extraction from the deep water reserves. Insanity! After all, these are potentially huge reserves. There is no justification to support this type of initiative, which damages Brazil’s international influence, compromises our national security and significantly reduces our economic resources from the extraction which were originally earmarked for a Sovereign Fund to be used by future generations.

Parente has adopted a demagogic narrative that avoids the so-called “political use” of Petrobras. Building on the damage to Petrobras’ image caused by the Lava Jato investigation scandals, the government decided to throw a monkey wrench into the company’s pricing policies. It adopted automatic parity with the international petroleum market’s price fluctuations. Consequently, Petrobras began to raise its refineries internal prices in accordance with external changes.

Parente and the dismantlement of Petrobras

The rhetoric used to justify this change is based on so-called “tariff realism”, condemning the previous policy of containing petroleum derivatives’ price increases to reduce inflation risk. Nevertheless, the fact is that Petrobras is a public company acting in a strategic sector. Therefore, there is nothing more understandable than a democratically-elected government establishing policies for it. It is unreasonable to suppose that Petrobras should blindly or naively follow private energy companies’ rules or profit criteria.

This scenario had changed significantly since President Fernando Henrique Cardoso first resolved to internationalize the company and nearly managed to change its name to “Petrobrax” in the 1990s. His government’s absolute priority was to convince the international financial sector to invest in our petroleum on the New York stock exchange. In assuming this commitment, the Brazilian government started, from that moment forward, subjecting itself to the type of market rules where the only interest is speculative profit on the share value and not the company’s contribution to the Nation’s economic and social development.

In changing Petrobras’ price policy Parente created a mid-term trap for the Temer government. It was always clear that the low price per barrel of petroleum would rebound at some point in the future and the future arrived. In the first phase there were systematic readjustments to the price of cooking gas, which provoked a dramatic worsening in living conditions for the majority of the low income population. With monumental unemployment levels and salary reductions, studies show that the poorest segment of the population is beginning to substitute firewood for cooking gas.

The frequent gasoline and diesel price increases have also begun to weigh on the middle class and create a generalized impact on the inflation index. The population has begun to realize that the new pricing policy only operates for increases. During several moments in which the petroleum price dropped, the effects were never seen at the gas stations. Despite all evidence to the contrary, the government continued with a deaf ear to complaints about its strategy. Last week, things changed. With the strong symbolism of five price increases in a single week, the truckers movement gained national expression. And through this pressure, Temer finally decided to act. After all, there are elections programmed for October and the Government-aligned candidates don’t want any more bad news to weigh on their campaigns like a heavy uniform.
It is probable, therefore, that that all of the bravura about technical “seriousness and competency” and not giving into political pressure will be abandoned. Trump’s bungling on the global scene has contributed to an international rise in petroleum prices and if the Temer government maintains its idiotic stubbornness in automatically linking prices, it is very possible that we will have a explosion here.

It does not make sense for Brazil to adopt a policy that can only be justified by countries which entirely depend on imported petroleum. In our case, to the contrary, we are self-sufficient in energy thanks to our large internal production. During 2017, for example, our commercial balance in petroleum was a $3.7 Billion surplus. This means that we exported more than we imported. The only rationale that could explain this shot to the foot by the duo of Temer and Parente is to please foreign investors. Shareholders could consider it odd that Petrobras refuses to earn still more money off of the price increases for petroleum barrels practiced by the OPEC cartel. After all, this represents less of an increase in stock and dividend values. But so what?

We are talking about a majority publicly owned company that should prioritize meeting the needs of the Brazilian population. It is fundamental that the positive results of its economic activities are used to increase is capacity for internal production, with more investments. The remuneration of profits to minority shareholders in foreign stock markets should not be a determining factor, for example, in price policy.

In another historical irony Temer may be forced to give in to the truckers’ movement. After ignoring generalized pleas for changes to the policies that are dismantling the company, he may back down, confronted by the powerful transport company lobby. Happily for now, the truckers have managed to express the people’s general feelings of discontent with the government, which unravels a bit more with every day that passes.
This article originally appeared in Outras Palavras, was translated by Brian Mier, and can be seen in its original Portuguese here
.