Like the phoenix, Lula, who led the best government in Brazilian history, has returned in an extraordinary manner to save us from bolsonarista neo-fascism and to pacify and rebuild the country – a herculean, heroic task which only he can lead.

Lula’s historic victory was a front-page story in the World’s leading newspapers. The New York Times, for example, published several articles on the subject, with great visibility and emphasis. The same happened with newspapers and magazines in Europe and Latin America.

On October 31, Lula’s victory was the biggest headline story on the planet. As well it should have, since it is one of the biggest stories of political resurrection in modern history.

A few years ago, as Lula himself points out, he was buried alive in the dungeon of judge Sérgio Moro, who convicted him without material evidence based on coerced plea bargain testimonies extracted from blackmailed convicts desperate for sentence reduction, and a public opinion manipulated by a childish power point presentation. 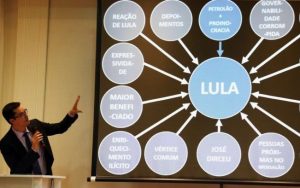 At the time, they said that Lula was finished forever and that the PT had been destroyed. This was the dominant narrative in the corporate media that had decisively contributed to the 2016 coup and to Lula’s political imprisonment

But like the phoenix, Lula, who led the best government in Brazilian history, has returned in an extraordinary manner to save us from bolsonarista neo-fascism and to pacify and rebuild the country – a herculean, heroic task which only he can lead.

The only parallel to this kind of political trajectory in modern times is the case of Nelson Mandela, who came out of Robben Island prison to end apartheid, reconcile South Africa and free it from world isolation.

More importantly Lula’s victory, as the New York Times rightly pointed out in a widely publicized video, represents the possibility of saving the planet.

Bolsonaro has transformed Brazil into and international pariah, a kind of planetary black sheep, due in large part to his active and abject anti-environmentalism.

He threw all of the internal and external environmental advances made by the PT – including the huge reduction in deforestation and significant international commitments to greenhouse gas reduction – to the most backward interests of unbridled capitalism and held a fire sale – literally.

The world has rightly come to fear that Bolsonaro would let the Amazon burn in an irreversible process that would eventually bring global warming to the disastrous point of no return.

This grotesque anti-environmentalism, added to scientific denialism, misogyny, racism, homophobia, and, above all, the constant flirtation with dictatorship, made Bolsonaro a persona no grata for most of the world’s countries.

The relief of the so-called international community with the election of Lula, therefore, is not surprising. The fascistic far right and community of climate deniers have lost their main bastion.

The great world leaders, Biden at the forefront, rushed to recognize Lula’s legitimate and democratic victory, something Bolsonaro refused to do.

These rulers are well aware that Lula, the only Brazilian politician who has ever managed to become a great world leader, will be able to contribute, once again, to the solution of serious international problems, starting with the climate crisis, passing through hunger, economic crisis, war and by the aggravation of geopolitical tensions.

Lula will certainly use his great negotiating power and Brazil’s broad soft power to contribute to a more symmetrical, multilateral, peaceful and prosperous world order.

Under Lula the BRICS, Africa, the Middle East, South-South cooperation and, above all, sovereign regional integration will once again be central to our foreign policy. At the same time, Lula should invest in good relations with the US, the European Union and other more traditional allies, as he has always done.

With Lula, Brazilian foreign policy will once again be universalist and pragmatic, without ideological conditionalities such as those imposed by Bolsonaro, especially in the period of madness under Ernesto Araujo, who was Brazil’s only pre-enlightenment Foreign Affairs Chancellor in history.

With Lula, the world can breathe again, smoke-free.

Marcelo Zero is a sociologist, international relations specialist and technical adviser to the PT Senatorial leadership.