On September 26, the Federal Supreme Court upheld the exclusion of 3.3 million registered voters who did not attend an special electoral review between before a deadline of May 2018. Most of those cancelled did not register their biometrics, which became mandatory in 1,248 cities, unevenly distributed around the country, and concentrated in the traditionally left voting North East.

The move has caused an outcry just 11 days prior to the October 7 first round vote, in what is Brazil’s most important election in decades, and where an extreme-right candidate Jair Bolsonaro leads in the first round polls. The massive number of voters excluded is approximately the margin by which Dilma Rousseff was re-elected in 2014, which has added to the alarm.

The court’s decision means that just over 2% of the Brazilian electorate will not be able to participate in the coming election. PSB, PT and PCdoB argue that the measure disproportionately affects the poorest in Brazilian society, and thus their own voters.

The electoral review excludes voters who did not participate in three elections, who missed the process of biometric registration, and other irregularities. Before the deadline, residents of Bahia in particular had complained of mass confusion and 6 hour waiting lines for Biometric registration, with many simply unable to complete the process. The case went to trial after PSB, backed by PT and PCdoB, filed a lawsuit to demand that the TSE Electoral Court allow all of those who had their title canceled for not attending the electoral review to vote in October 2018.

According to the TSE, more than half of the canceled registrations, 53%, are concentrated in the North and Northeast. In the Northeast alone, where Fernando Haddad, of PT, leads in Presidential polls, 1.5 million voter registrations were canceled. Most affected is the state of Bahia, home to Brazil’s biggest Afro-descendent population, with 586.3 thousand voters struck off, followed by Ceará (234.4 thousand) and Maranhão (216.5 thousand).

In an already tense election, and following the TSE’s barring of certain winner Lula da Silva, this mass disenfranchisement of voters in PT’s heartlands will only add to fears that the Brazilian establishment is committed to preventing a Fernando Haddad Presidency. At present that means leaving the way clear for fascist candidate Jair Bolsonaro. 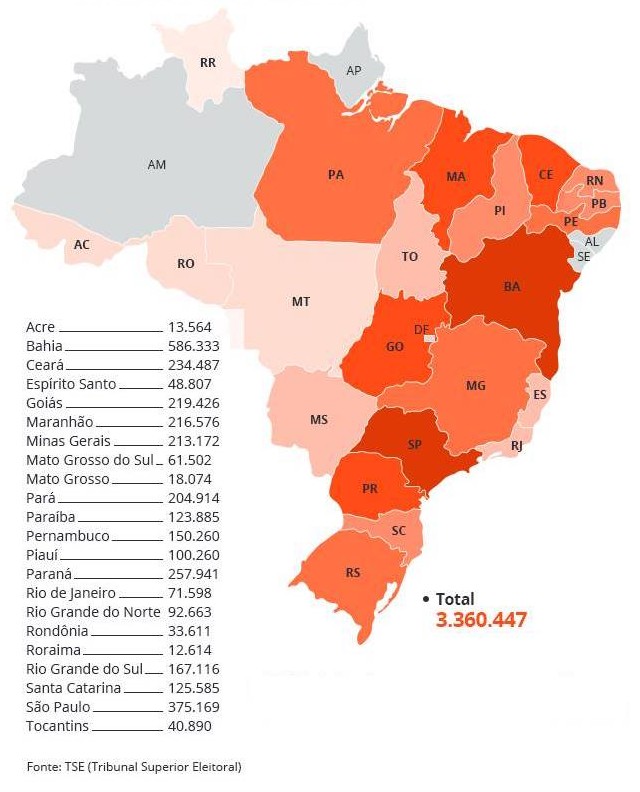