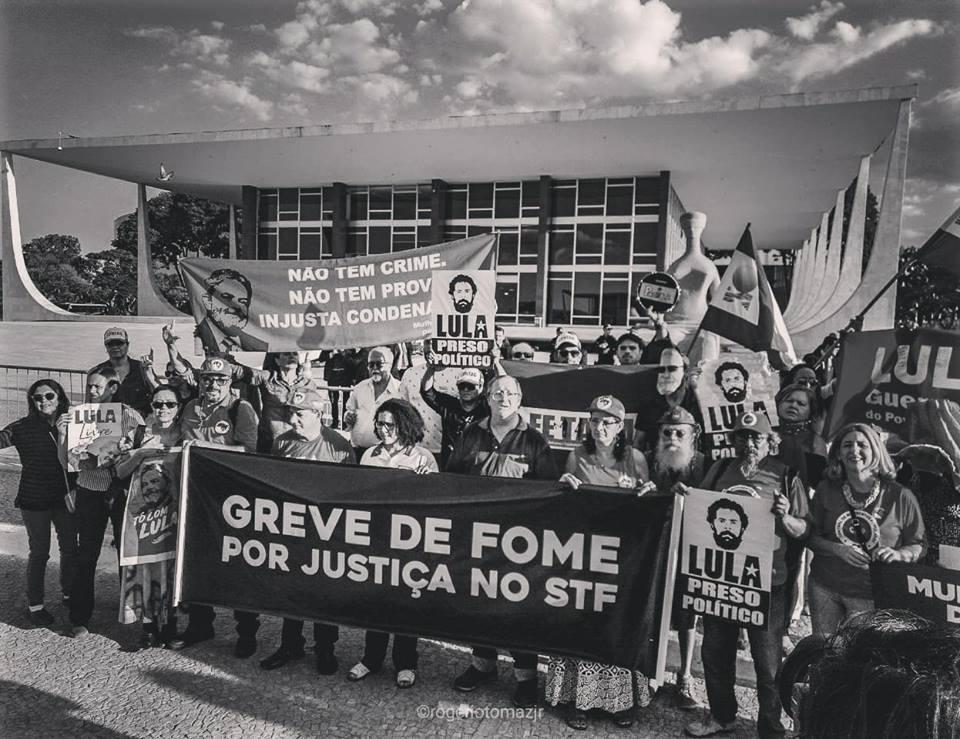 Brasília. On July 31, as a group of 6 hunger strikers held a press conference in front of the Brazilian Supreme Court, a group of security guards came up and started pushing activists and journalists. A video that is circulating in the social media shows Gegê, 68, national leader of the CMP, being knocked over and pushed down a small flight of stairs.

Luiz Gonzaga “Gegê” da Silva is a national leader of the Central de Movementos Populares (Popular Movements Central/CMP), a federation made up of dozens of poor people’s or “popular” social movements that fight for housing, LGBT, Afro-Brazilian and small farmers’ rights, and has a nationwide membership of around 300,000. A former political prisoner from the dictatorship years and a contributor to Brasil Wire’s book, Voices of the Brazilian Left, Gegê is one of 6 social movement leaders who initiated the hunger strike yesterday. The strikers say that the act will continue until  ex-President Lula, held in solitary confinement for over 115 days for committing indeterminate acts, and barred from giving interviews, is released from prison and allowed to run for President. The other hunger strikers are Father Sérgio Görjen and Rafaela Alves from the Movimento dos Pequenos Agricultores (Small Farmers Movement/MPA), Jaime Amorim, Vilmar Pacífico and Zonália Santos from the Movimento dos Trabalhadores Sem Terra (Landless Rural Workers Movement/ MST). On July 31st, the activists prepared an official complaint to deliver to the Supreme Court in which they affirm that “the judicial branch of government is violating the Constitution by impeding the people to sovereignty decide, by vote, on their president and the future of their country”. They called a press conference on public land in front of the Supreme Court building and, as a spokeswoman was reading their compliant, armed security guards began pushing journalists and activists. Several journalists and activists were pushed to the ground and, where they say they were kicked and stepped on by the guards. The hunger strikers were not allowed into the Supreme Court building to file their complaint.

Afterwords Gegê told Brasil Wire that this reaction by the Court will only strengthen the struggle to free Lula and allow him to run for President. “We tried to file an official complaint to the Supreme Court and were received with kicks and pushes by representatives of the State,” he said. “It is clear that this government is trying to destroy any kind of organization by the working class, but this act of violence only serves to strengthen the fight of the poor in this country and draw national and international solidarity for our struggle.”