The development philosophy behind the fires in the Amazon is based on the World Bank funded, Dictatorship era Polonoroeste project, which killed thousands and devastated Rondonia’s rainforest. To Bolsonaro and his military aids, there was nothing wrong with it.

During the 1980s a series of shocking images and films appeared of massive devastation underway in the Amazonian state of Rondonia. There, an area of old growth rainforest roughly equivalent to the size of Great Britain was being ripped down at record rate. As the fires generated huge smoke clouds, thousands of indigenous people who had been living in the forest died off at the hands of the ranchers and farmers, gunned down, poisoned or deliberately infected with smallpox.

This devastation, portrayed in landmark documentaries such as “Decade of Destruction” by Adrian Cowell, was being financed by the World Bank, who had convinced the unelected, authoritarian Brazilian Military dictatorship that ripping down a large part of the rainforest would be good for the economy. The result of this partnership was the notorious, 1981, Polonoroeste project. With Polonoroeste, the World Bank lent around $440 million (around $1 billion) to and provided technical support for an authoritarian military dictatorship, known for committing acts of genocide against indigenous tribes in the Amazon, to pave dirt highway 364, (impassable during rainy season at the time), connect a network of service roads cutting into the rainforest for 100km on either side of the highway, and provide infrastructure for the arrival of 30,000 migrant families from Southern Brazil. Brazilian taxpayers, who had no say in the matter, would be forced to pay back the loan with interest for decades to come while neoliberal Presidents like Fernando Henrique Cardoso used Brazil’s debt as an excuse for not adequately funding the health and education systems. 0.19% of the project’s budget was allocated for environmental protection.

In the academic paper Boulevard of Broken Dreams, Robert H. Wade analyzes internal communications inside the World Bank during the implementation of Polonoroeste. Programs Division Chief Robert Skillings had been in the World Bank since 1947, and considered the project to be his final masterpiece before his retirement. In case after case, he had every bank technocrat who criticized the operationality, ethics, human rights and environmental strategies removed from the project. Many people inside the bank knew that an environmental and human rights disaster was underway, but their criticism was silenced. As international outcry grew, he replaced the director of the Brazil Department with a protege of aggressively ideological neoliberal Bank Vice President and Chief Economist Anne Kruger.

“He couldn’t understand all the fuss about Indians,” Wade writes,   “he remarked. ‘They wear T shirts and sneakers just like everyone else’. He openly disparaged [his predecessor’s] work on Amerindian protection. ‘It’s all bullshit’, they heard him say.”

To the World Bank, the bottom line was that ripping down trees, just like burning petroleum, helps short term GDP growth. It still does. Treating environmental damage as an externality remains one of the biggest problems with monetarist/neoliberal economics to this day. If mid and long term environmental damage were calculated into their development models, they would collapse.

The debacle in Rondonia led to the emergence of international environmental NGOs as important players on the international stage. As a result of the failure of Polonoroeste, the World Bank began consulting NGOs on all of its future development projects in the 3rd World, although they would often give them little more than lip service. 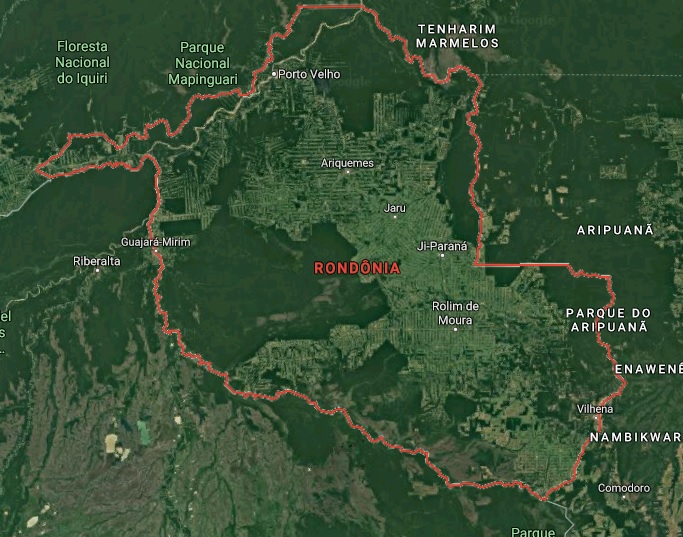 Polonoroeste represented one of the last large scale development projects by the Military Dictatorship, which was deposed in 1985. To this day, Military officials from the time refuse to admit that it was failure. Afterall, Rondonia is now one of the nations top producers of GMO Soy and Beef for international markets, and, although these activities are low labor intensity, they make a lot of money for the big ranchers and agribusiness value chain suppliers and the international corporations who profit off of them, like Cargill, which is currently expanding its capacity to export GMO soy from its Porto Velho grain terminal from 3.5 to 6 million tons per year.

I traveled up to Rondonia during the final week of July. While I was there I learned that a group of geographers at the local federal university has coined a term to describe the Bolsonaro government’s plan for neighboring Amazonas state, which still had 98% forest cover as of 2018. They argue that the government is planning to duplicate Polonoroeste in Amazonas through a process which they call, “Rondonization”.

When Dilma Rousseff was President, Highway 319, connecting Porto Velho to Amazonas state capital Manaus, was a dirt road that was impassible during the rainy season. After the 2016 coup, Michel Temer cut funding to Ibama, the environmental protection/policing agency, by 51% and began paving highway 319. The 120 kilometer stretch of highway between Porto Velho and the Amazonas town of Humaitá, which is currently the epicenter of fires burning in Amazonas, is now paved. Before, it could take up to two days to get there from Porto Velho. Now, as the droves of international journalists swarming to the area have discovered, it is reachable in a matter of hours. The Bolsonaro government has further gutted Ibama and rendered it dysfunctional, firing the superintendents in 22 states and ordering them to halt all activities unless they are approved in Brasilia, by enemies of environmentalism connected to international agribusiness.

The government is moving forwards with paving the rest of the highway up to Manaus, and plans to lay in a network of similar service roads which, as local activist Ramon Cajui told me, work as “veins sucking everything out of the forest.”

During the time that the Military Dictatorship and World Bank worked together on the ecological and human rights tragedy of Polonoroeste, Jair Bolsonaro was an Army Captain. 16 of his cabinet ministers are retired Generals who also worked in the Dictatorship. They don’t think there was anything wrong with the project, either from an environmental or a human rights perspective. This is why they are now setting out to “Rondonize” the rest of the rainforest.