Protests and vigils have been taking place across Brasil and in front of embassies worldwide demanding freedom for ex-President Lula.

On the morning of April 11th, groups of social movement and union activists shut down highways with burning tires across Brasil, as crowds mobilized for protests in cities across the country and around the world against Lula’s political imprisonment, made over unspecified crimes with no material evidence. 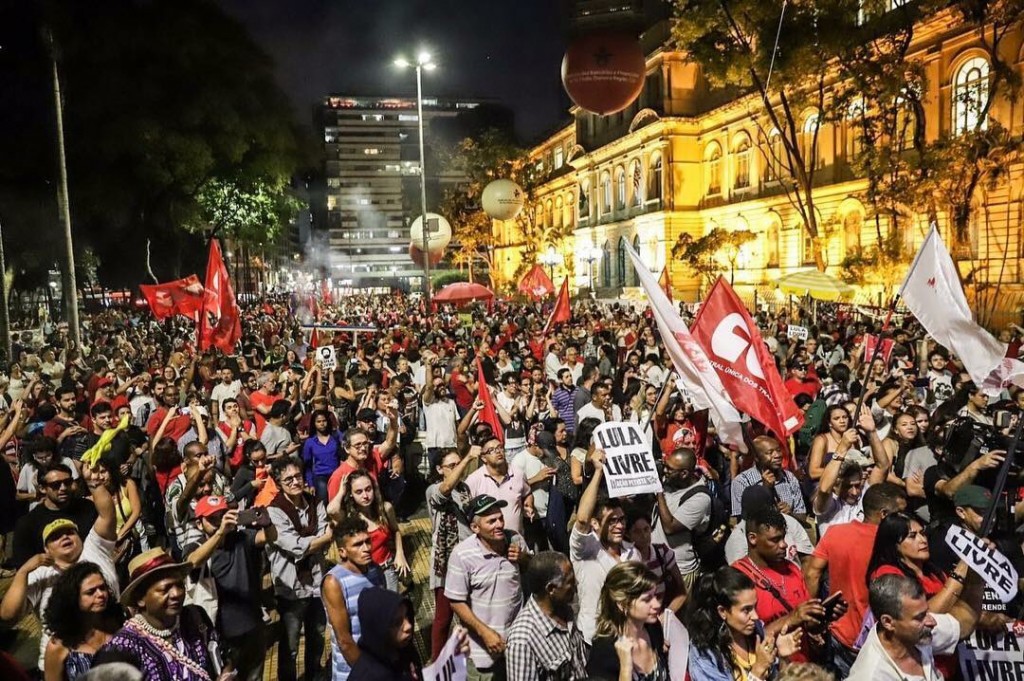 In Curitiba, where thousands of people have come in from around the country and are camping out in vigil in front of the Federal Police building where the ex-President is being denied his legal right to receive visitors, CUT union federation president Vagner Freitas said that the best strategy for resisting Lula’s arbitrary, political imprisonment is to organize the Brazilian workers to defend his liberty and an end to the coup government’s attacks on human and labor rights. 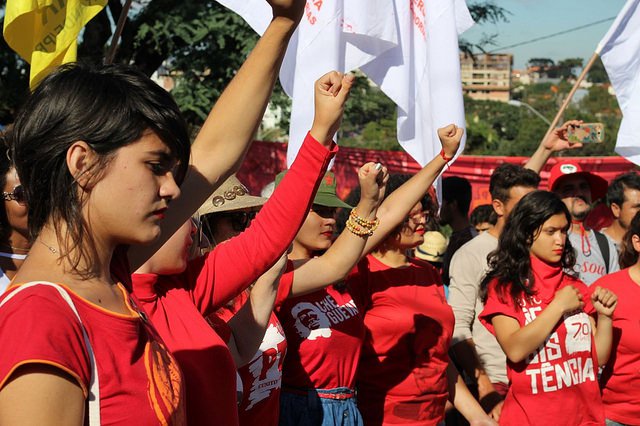 One example of the protests is taking place in the Northeastern state of Pernambuco, where Lula lived the first years of his life in abject poverty before he migrated with his family to São Paulo,  20,000 members of the The Movimento de Trabalhadores sem Teto (Homeless Workers Movement/MTST) shut off highways in five counties with burning tires in protest of Lula’s imprisonment. 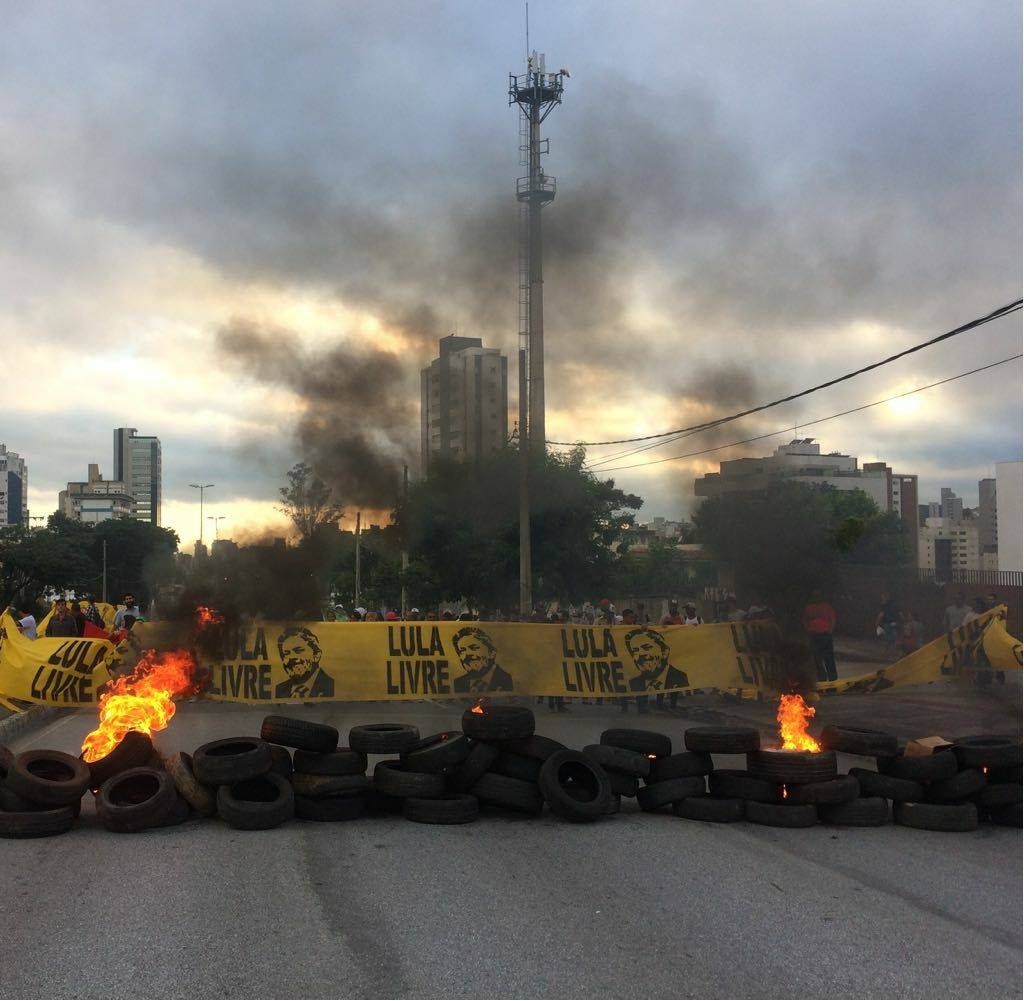 Marcos Cosmo, from the MTST Pernambuco state directorate, spoke with Brasil Wire on the phone today.

“We held a large series of protests today, in Cabo de Santo Agostino, Ipojuca, Jaboatão, Santa Cruz de Capiparibe, and in Carauru, the capital of the semi-arid region. The objective was to show our indignation at this tremendous injustice committed by the bourgeois judiciary, at the service of the financial system and an anger-ridden Brazilian bourgeoisie. We decided to shut down highways, by burning tires so that our scream of indignation could resonate across the nation. We mobilized more than 5000 families  today in these towns to say that we want freedom for our president Lula immediately. We refuse to permit that a biased judiciary, under a Judge, Sergio Moro, who is affiliated with the PSDB party, who participates in meetings and dinners with the PSDB and who has a clear ideology, could have the political and judicial moral to arrest a president who was democratically elected to two mandates and helped elect the first woman president in the history of the republic with more than 50 million votes. We suffered a Coup and we are perceiving with every day that passes that this coup is consolidating. The Generals, including those in the reserves, who don’t have the courage to face the Brazilian people by themselves,  hide behind cannons and, trusting in the power they have with their weapons, are making constant threats against the Brazilian people that they will enact a military coup in Brasil. These Generals forget that 1964 was one thing but today there is another conjuncture in Brasil with more than 60 million Brazilians who are aware of what is happening. I don’t know what they are thinking, unless these Generals who want to install a military dictatorship in Brasil want to kill 60 million Brazilians.  Our protest today was to free Lula immediately and to strengthen Brazilian democracy. Today, our young democracy is in intensive care and we have to fight to keep it alive, because, historically speaking,  a lot of blood was spilled in Brasil for 20 years by the comrades who sacrificed their lives for democracy to return to Brasil. This is why we are going to continue fighting.” 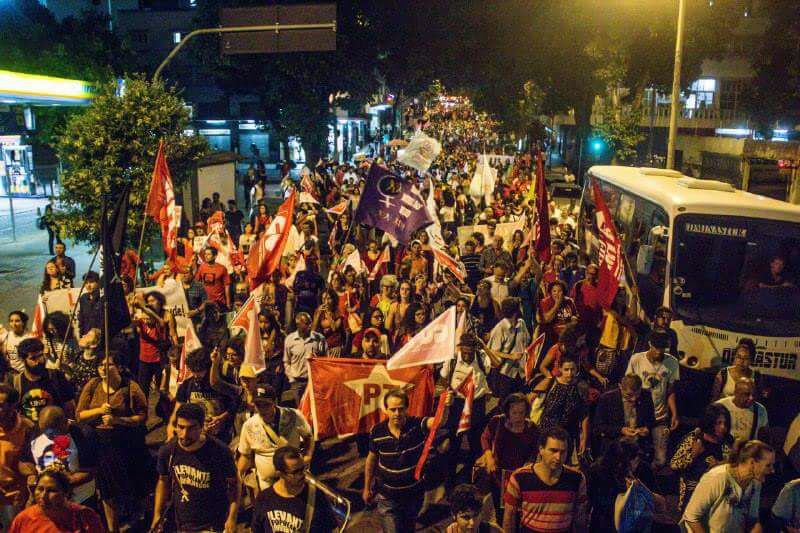 Street protests in solidarity with Lula took place in in all 26 Brazilian state capitals and dozens of other cities across the country. In São Paulo’s Praça Republica, a special music event was held with artists performing in defence of the former President. 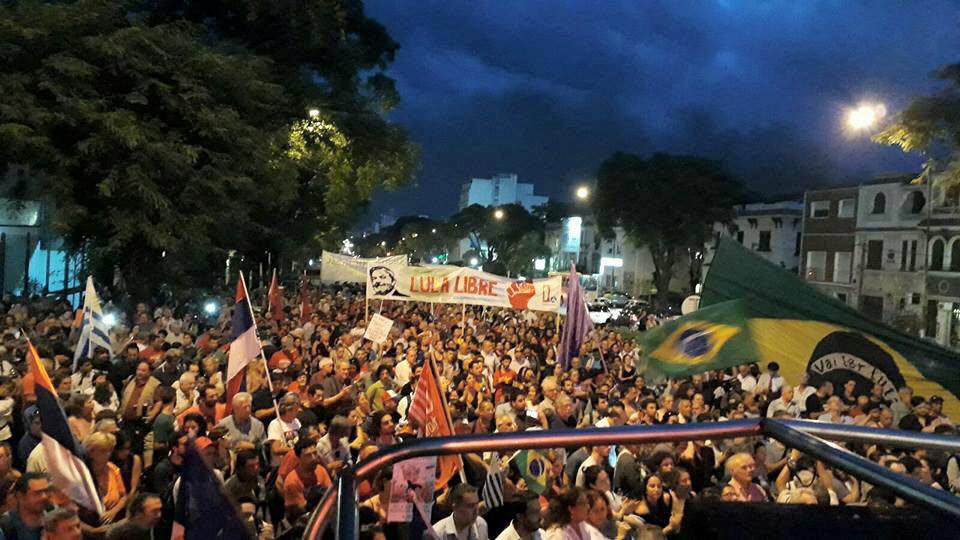 Thousands took to the streets of Montevideo, Mexico City, Buenos Aires and other cities across the hemisphere saw protests in support of Lula and Brazilian Democracy, now under its greatest attack since the end of the Military Dictatorship. European and North American cities such as London, New York and Madrid saw similar shows of solidarity.

New York-based group Defend Democracy in Brazil issued a statement signed by a broad front of resistance groups which said: “The conviction and imprisonment of former President Lula in Brazil is unjust and motivated by political reasons. Lula is innocent. This is Lawfare. In the last 3 years of investigations , President Lula had his entire financial life investigated, the accounts of Instituto Lula were blocked, his house was invaded and computers of the entire family were confiscated. Investigations conducted by Judge Moro did not find a single piece of evidence that connected Lula to any wrongdoing in any government or enterprise during and after his term in office.The forces promoting the coup d’etat in Brazil through prejudice and persecution are forcing to jail him without any evidence of crimes, and are disrespecting the Brazilian Constitution, which guarantees the presumption of innocence as a fundamental human right, in order to prevent him from running for President in the October 2018 general elections.”