The new Rio de Janeiro Governor-elect, Wilson Witzel, from the Partido Social Cristão (Social Christian Party/PSC) was elected with a campaign focused on one of Jair Bolsonaro’s key issues – the war against crime. Like his ally Bolsonaro, Witzel does not seem to worry much about the constitution or human rights getting in the way of his political goals.

In Brazil, the military and civil police forces are controlled by the state governors. In an interview on GloboNews TV, Governor-elect Witzel said that he wants snipers to perform police operations in favelas to “kill criminals who are carrying restricted weapons.” He has already requested the Rio de Janeiro Civil and Military Police to provide the names of the elite snipers which they have available. According to him, the Rio police, already among the world’s most violent, will have a carte blanche to kill – or to kill even more than they already do in the favelas.

Wilson Witzel is a complete novice in politics who rose up in the 2018 Brazilian elections on the coattails of the conservative and war mongering platform of Jair Bolsonaro. An ex-judge, Witzel worked for 17 years in different civil and criminal courts, only entering the world of politics in 2018, when he left office to affiliate with the PSC.

Witzel was unknown by the majority of the electorate in Rio de Janeiro until the first round of the elections, having started the race polling at only 1%. Surprisingly, with only 27 seconds of nightly electoral campaign advertising on television, the ex-judge made an incredible jump to 17% in the final poll before the first round. The sudden growth in the polls and qualification for the second round were driven by the explicit support of presidential candidate Jair Bolsonaro, but also by Rio’s terrible political quagmire.

After the 2016 Olympics, the state government was rocked by an unprecedented economic crisis. In June of that year, the Rio de Janeiro government decreed a state of public financial calamity, no longer able to pay salaries and retirement pensions of its public sector workers. In this context, Rio was also hit with the revelation of huge corruption schemes involving the main political leaders in the state, and ex-Governor Sergio Cabral (2007-2014) was arrested by the Federal Police together with political and business allies. Finally, in February 2018, under the pretext of fighting organized crime, the Michel Temer government decreed the unprecedented militarization of the state by turning public security over to the control of the armed forces. 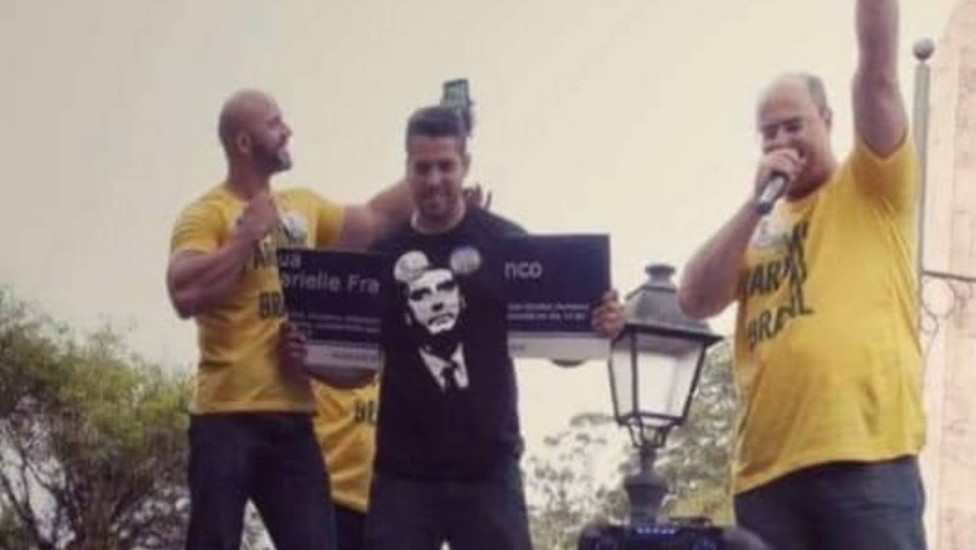 Riding the Bolsonaro wave, associating himself with the figure and the ideas of the future president, Witzel wants to transform Rio into a showcase for the most radical security plans, which includes the controversial recruitment of snipers to kill people suspected of carrying assault rifles in favelas. The new governor has also said that police marksmen should be placed in helicopters. “The specialists who set up the operations will make the decisions,” he said on GloboNews.

During the same week, in an interview in the Estado de São Paulo newspaper, Witzel said that these police snipers should not be held responsible for their actions and based his rationalization on article 25 of the Brazilian Penal Code, which allows legitimate self defense in case of unjust or imminent aggression. “A bandit with an assault weapon can only be stopped with another assault weapon” he said, “it is not enough to tell him to simply place the gun on the ground.” When asked by the reporter if there was consensus on his interpretation that all that is necessary is for a person to be carrying a machine gun, without aiming it at anyone, for the police to kill him in self defense, Witzel said, “Does he have an assault weapon? He has to be shot. The police will do the right thing: They will aim at his head and… Fire! So no mistakes are made.”

Witzel‘s interpretation of the law was criticized by legal specialists, who say that the mere fact that a criminal is armed does not constitute a hypothesis of aggression or justify legitimate defense. “Police, in theory, do not kill, they defend. This is what is prescribed in the law. If you motivate the police to kill you are giving up on the process of investigation, which is supposed to be their main function. This is something that would be greatly missed,” said former Rio de Janeiro Military Police Chief, Colonel Robson Silva.

Witzel admitted that he knows the risk of police being sued or being tried in criminal court, but he said that he will personally defend them. “The police will be defended. If they are convicted we will appeal.” When asked about number of notorious recent incidents in which people were accidentally been killed in Rio for caring unrelated objects such as umbrellas or power drills that were confused with weapons, Witzel said that those shots were not fired by “properly trained military”.

Amnesty International issued a statement contesting Witzel’s declarations, saying his plan, “breaks Brazilian and international law and disrespects the rules of the use of force and firearms”. For Professor Jaqueline Muniz, from the Public Security Department at Rio de Janeiro Federal University, Witzel’s proposal is naive. “What the Rio police need is to develop dynamic and static standards for shooting according to the weapon used, guaranteeing their integrity in the use of their work tools, and the integrity of the population. This would prevent unnecessary shootings and wasted ammunition. For this, the police should develop precise standards and practices for defensive shooting.”

It is important to emphasize that Rio de Janeiro is the state where the police already committed the highest number of assassinations in Brazil in 2017 – over 1000. In 2018, even under federal military occupation since February, there has been a record number of deaths caused by the police, as well as complaints of torture, aggression, invasion and damage of residences during Armed Forces operations in favelas. Even with the federal intervention, the shoot outs and homicides not only did not fall, they increased. The chances are that this scenario will further worsen after the new governor takes office.