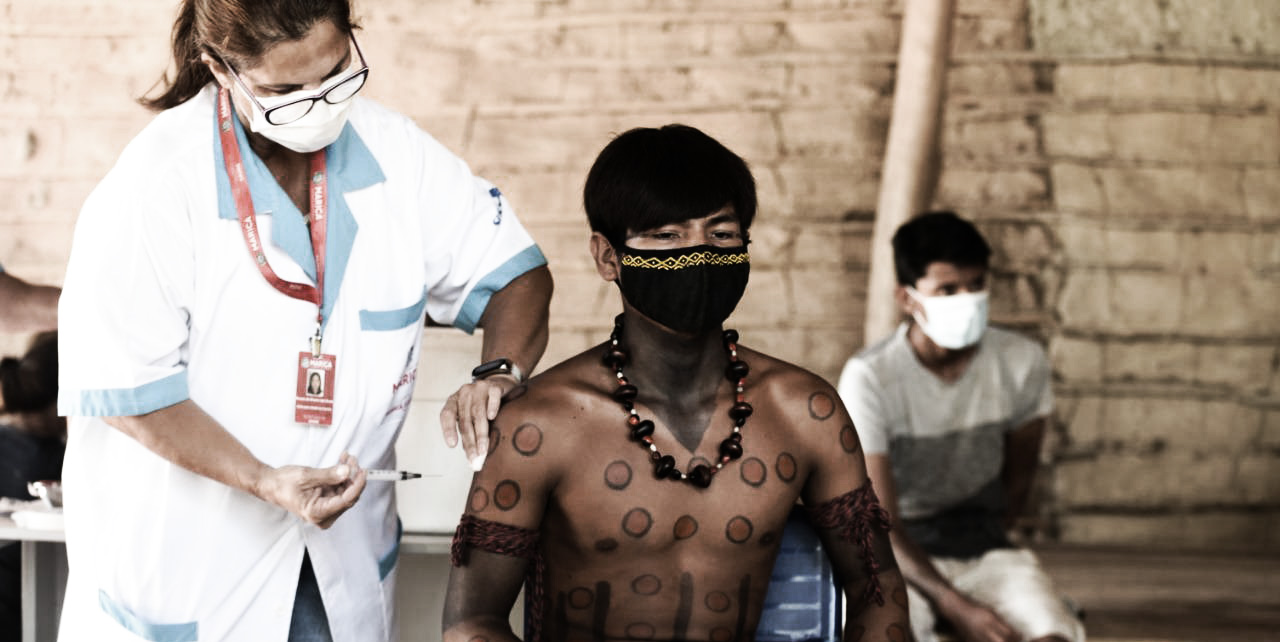 Missionaries spread disinfo and fear about vaccine to indigenous communities

Indigenous communities are considered a priority group in vaccination against COVID-19 in Brazil, but due to the influence of missionaries some public health agents are facing hostility and even threats from some communities.

In the race to guarantee the immunization of indigenous peoples, a logistics that implies difficulties such as facing long distances and difficulties in accessing villages, especially when talking about the Amazon, the challenge now arises to convince them that the vaccine is safe and  it is the only guarantee against the new coronavirus. In the Brazilian Amazon alone, there are 32,927 confirmed cases and 760 deaths due to Covid-19, according to a newsletter updated until February 1 by the Coordination of Indigenous Organizations in the Amazon (Coiab).  Across the country, Covid-19 killed 948 indigenous people until February 4th, according to the Articulation of Indigenous Peoples of Brazil (Apib). Around 47,752 cases of Covid-19 have been confirmed in 161 different indigenous people.

The Jamamadi people say they will only accept health teams into the village if Stuart Campbell a North-American missionary, from the Greene Baptist Church participated.

The local authorities negotiated with the missionary and promised the indigenous people that he would accompany the vaccinations, but, after last-minute clashes, his presence on the team was canceled. The Jamamadi revolted and the situation worsened.

Problems between local authorities and indigenous communities caused by Campbell are not news. In 2018, the missionary was expelled from the region by authorities after having illegally entered the land of the isolated Indians of the Hi-Merimã ethnicity, which is close to the Jamamadi.

By preventing Indigenous Health District officials from entering the villages, the health of the Jamamadi is helpless.  With a population of 399 people, according to a census by the Special Secretariat for Indigenous Health (Sesai) in 2020, some people use leprosy, hypertension and other medications.  But they are without treatment, according to the report, as some indigenous people, led by their leader Cacique Abadias Jamamadi, do not authorize the delivery of the medication.

The restoration of healthcare is conditional on the missionary’s return to the region, as shown in a document obtained by the Bocado report. “We have been in trouble since 2019, but it intensified in 2020, when service in the village was interrupted”, reports an employee who works in the region. “There are threats to the professionals who work there and the missionary interferes in all dialogue with the Jamamadi.”

Other communities are facing the same ongoing issues like the ones located near the municipality of Santo Antônio do Içá, in the Amazon, were the indigenous people are also refusing to receive the vaccine against Covid-19 because of the influence of evangelical pastors.

Perpétua Tsuni, leader of the Kokama people from that region, told UOL that religious leaders spread lies among members of local communities, that “the vaccine would transform them in animals, homosexuals, or even kill them. They’ve also mentioned that the vaccine microchip would carry the ‘mark of the beast’”.

The vaccine is not mandatory in the country, so statements of responsibility are being prepared by health professionals working in the region so that indigenous people who refuse to receive the dose can sign, thus making them responsible for possible consequences of contamination by the coronavirus.

In Brazil, indigenous communities have the right to remain isolated.  It is a law instituted in 1987, in the midst of the drafting of the new Constitution, which recognized a series of other rights which were previously denied.

The presence of evangelical missionaries and pastors in indigenous lands, often seeking to change the worldviews of indigenous peoples, has been discussed for many years. Due to the alarming refusal of the vaccine, on the 26 of January, APIB launched a collective action to guarantee vaccination in Brazilian indigenous lands with the hashtag #VacinaParente.

On its social media and in contact with grassroots organizations, the entity has passed on the videos produced autonomously by local leaders, which aim to encourage the population to adhere to the vaccination programme.  The campaign is a response to the anti-vaccine crusade that has led many indigenous people to avoid immunization.