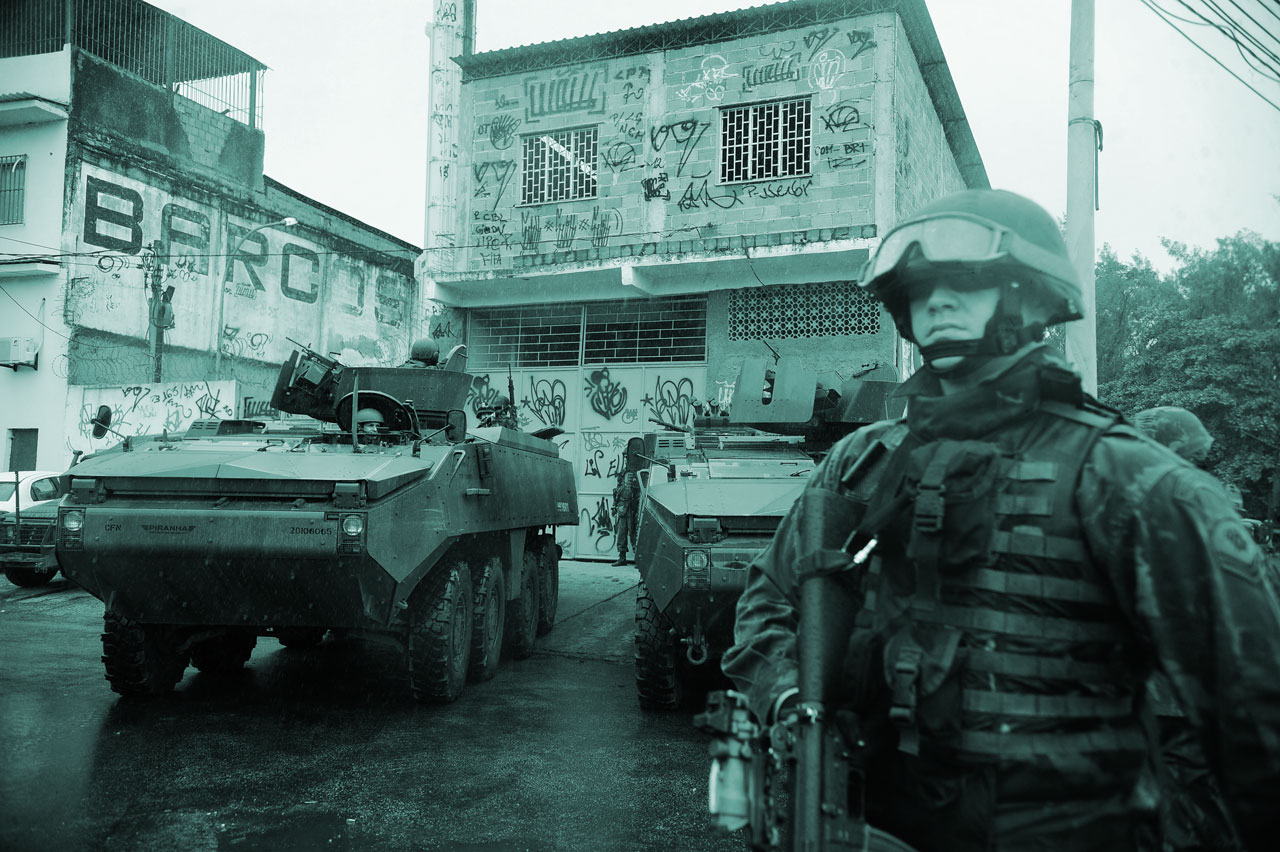 The action lasted over 14 hours, leaving one dead, dozens of injured and thousands of angry citizens.

As Rio de Janeiro’s military occupation reaches the 6 month mark, all analysis points to it’s colossal failure. Shootings have increased by 40%, there have been 2600 murders, and 736 people were killed by the police. The drug gangs and militias – ostensibly the reason that the military took over the security apparatus in this, Brazil’s 9th most violent state – are still operating normally. The assassination of City Councilwoman Marielle Franco, the most prominent critic of the military occupation, remains unsolved after 5 months. The following is a report on a joint military and police operation that took place on August 20 in Franco’s former neighborhood, Maré favela. Redes da Maré, which produced the article, is an internationally respected NGO founded and directed by local residents. Since illegitimate president Michel Temer turned Rio’s security apparatus over to the Military in February, 2018, 372 similar operations have taken place in favelas throughout Rio de Janeiro state.- ed.

The first hours of August 20 gave signs to Maré favela’s 140,000 inhabitants that it was going to be a very tough day. At approximately 1 AM, the military surrounded the community. Fireworks were shot off in warning. Residents who were at a pagode concert panicked. As they fled the club, some people were trampled. This was only a foreshadowing of what was coming: an action marked by homicide, truculence and illegal actions, which continued in an uninterrupted manner for over 14 hours causing panic, indignation, terror and material losses in a population that is tired of having its fundamental human rights violated.

According to reports from residents, the operation (read: invasion by military police forces) started at around 5 AM. Supported by the band of military troops that had surrounded the Maré favela, military police from Battalion 220, shock troops and the special forces battalion (BOPE) entered in the Maré neighborhoods of Nova Holanda, Parque Maré, Rubens Vaz and Parque União. We don’t yet know how many policemen entered each of these communities. There is a consensus, however, that it was no small number who circulated through the favela streets on foot or in the armored troop vehicles (Caveirão), stopping and harassing residents in an aggressive manner.

The night shift from Maré de Direitos, a human rights monitoring group based in the neighborhood, started receiving complaints of illegal actions committed by the police. Among the complaints were reports that a car was broken into and two houses were invaded in Parque Maré and Nova Holanda. In the case of both, the police did not show search warrants and left trails of destruction, damaging furniture and appliances. In Nova Holanda, they threw a family’s pet poodle off a third floor roof. The animal, fortunately, survived.

The worst, however, was still to come. At around 6 PM, Maré de Direitos received a phone call saying that four teenagers were being tortured in the Maré Campus, where various public schools are located.

Even though the mood was tense, Redes da Maré sent a team to the location. There, they encountered a group of around 50 people, most of whom were women and children, who were arguing with the police. They were relatives and friends of the four teenagers who were cornered out of sight by police officers in an alleyway. The team immediately began to try to mediate the conflict, speaking with the police officer who was standing guard blocking people from going into the alleyway.

“I started speaking with the police officer and I was shocked. He was so nervous that he was unable to speak coherently,” said one of the team members, “at one point he said, ‘we have been here since 4 AM, on foot, without food, without being able to go to the bathroom, and these people came here to cause trouble. How can you expect me to be calm?”

The mood continued tense, but under control. The mediation team positioned itself between the police officer and the group of residents, making a small human chain to try to prevent tempers from flaring even further while searching for a solution. While they spoke with the police, a group of around 10 police officers came up with a body, wrapped in a gray blanket. Nobody had any doubts – one of the teenagers had been killed and his body was being taken away in the armored troop vehicle. The families entered in despair and started screaming. One young man broke through the human chain to try to identify the dead person. This was the fuse. A police officer pointed his machine gun at the group and another fired shots in the air while a third threw a riot control grenade at the crowd. The grenade hit a woman in the arm, causing a (thankfully) light injury. The group dispersed.

The other teenagers who had been cornered made it out of the alley alive. The young man who was killed was nicknamed Belém and didn’t have relatives in the neighborhood, where he had lived for a little over a year. Little is known about him, including how he died. What is known, however, causes indignation. His body was removed from the scene of the assassination before a crime scene investigation was conducted, and his death was not registered in the police homicide division.

Maré de Direitos will file lawsuits to guarantee that arbitrary actions of police brutality such as home invasions, homicides and use of lethal weapons can no longer be used indiscriminately against the population. “This operation left us with a few certainties,” said Lidiane, coordinator of Redes da Maré‘s Public Security and Justice department, “we urgently need to reflect and discuss: 1)the psychological conditions and the mental health damage to police officers caused by the conditions that they are subjected to during these operations; 2) the lack of crime scene investigations when people are killed during these operations; and 3)  the use of lethal weapons against the population. Maré de Direitos is interested in life and the rule of law”.

This article can be read in its original portuguese here.