Federal Government propaganda which asks Brazilians to get out of isolation and back to work, is “criminal”, says Congressman.

Federal deputy Alexandre Padilha (PT-SP) has filed a lawsuit in the Federal Audit Court against the federal government, on account of the advertising campaign “Brazil cannot stop”, which will cost R$4.8 million of public money, and which will ask the population to interrupt the quarantine and take to the streets, in the midst of the coronavirus pandemic, which has already caused 77 deaths in the country, in addition to over 2,900 contaminations.

“The attitude of Bolsonaro and his Minister of Communication is criminal, because he tries to pit part of the population against health professionals, specialists and health authorities, who are concerned with saving lives”, explains Padilha, who recalled a similar campaign carried out by the city of Milan, Italy, one of the countries most affected by the disease.

“It is doubly criminal because it is almost a copy of a campaign made by the city of Milan. And the mayor of Milan yesterday apologized for this campaign, after accumulating deaths and coffins. It is criminal because it uses public resources that should be used to buy masks, diagnostic kits or resources for hospitals,” Padilha pointed out.

For the Congressman, Bolsonaro is wrong to place company profits in confrontation with the population’s health.

Initiated after an emergency decree from the federal government, the “Brazil cannot stop” campaign will publicize the “vertical isolation” strategy defended by Jair Bolsonaro, which consists of prioritizing quarantine for high risk groups and the elderly, freeing the rest to return to the routine of work.

Condemned by experts, the campaign may go on air next weekend, but it would already be, according to Época magazine, circulating in the WhatsApp groups of Bolsonaro’s militancy. 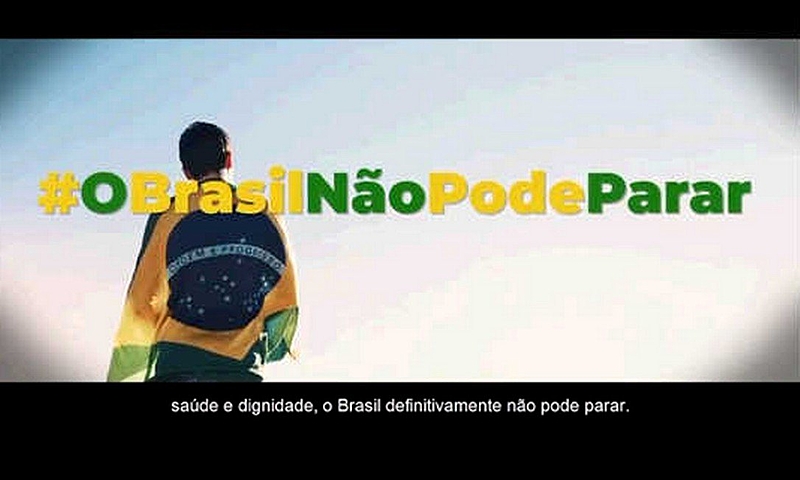 The controversial campaign video announces that: “For patients of the most diverse diseases and the heroic health professionals who care for them, for Brazilians contaminated by the coronavirus, for everyone who depends on care and the arrival of medicines and equipment, Brazil cannot stop. For those who defend the lives of Brazilians and the conditions for everyone to live with quality, health and dignity, Brazil cannot stop.”