Can anything stop Bolsonaro from drowning Brazil in his chloroquine-infused herd immunity strategy? Maybe not, but one brewing force is at least trying to slow it down. Miguel Nicolelis, one of Brazil’s most popular scientists, has teamed up with the nine states of Brazil’s Northeast to form the Scientific Committee to Combat Coronavirus (C4).

Nicolelis is to the brain-machine interface (BMI) as Santos Dumont is to the heavier-than-air machine (airplane), while the Northeast is home to a quarter of Brazil’s population which voted 2:1 against Bolsonaro (opposite of South 2:1 for Bolsonaro). These ‘rebel nine’ elements self-injecting such a catalyst could cause a political reaction that may go far beyond Brazil and the virus.

Scientists, graphic designers, and other professionals from all over Brazil are also contributing to the C4.

When science journal Nature asked the President of Brazilian Academy of Science if there were parts of Brazil where public officials were more open to science, he referenced the C4. The C4 has become a scientific lighthouse for a nation in a pandemic without a captain. The C4 plays many roles.

First and foremost, the C4 advises all nine governors through co-heads Nicolelis and Sergio Rezende (Science Minister under Lula). They hold ongoing online meetings with the governors and have developed a respect seen rarely between politicians and scientists. One example is my state of Sergipe.

At the end of April, our governor planned to reopen much of commerce. Many were seeing stores reopen in the south of Brazil, so there was growing pressure on the governor to reopen. Like others, our state is losing vital revenue that is not being adequately replaced by the federal government, which in 2020 has spent more on exchange swap loses than COVID aid for states, diverted funds from Northeast family aid for presidential propaganda, and paid a small monthly emergency aid of R$600 (€100) for the poor which is continually threatened to be cut. As the days go by, more people are not paying their house employees, as they themselves are getting less pay. It is a vicious cycle that is only getting worse.

Thus, the pressure to employ the poor so they can eat is increasing for governors as they see their money dry up. And unlike the trillion-dollar printing in EU and U.S., the imperial double standards of the global neoliberal economic system apparently does not allow the Global South to use the same tool of money making at the massive levels needed. If the Global South were to dare make money at such levels, they’d likely see the following threats from Wall Street: currencies demolished, bond ratings downgraded, and runaway inflation. I highlight all this to show readers how down here, the leaders in the Global South are under far more economic stress than those up there in the EU & U.S.

Unlike the others however, Brazil is obviously in a league of its own with Bolsonaro. Although we have an absurd amount of foreign reserves ($350b), there is no talk by the federal government of using it to help out for things such as tests, medical supplies, basic income, state transfers, etc. Brazil can easily cash out $100b with little problems. All in all, I understand why my governor is desperate to reopen as the federal government tightens the financial noose around his neck, but this virus does not care about economics or injustices. It’s just looking for the next thing to cling onto so it can replicate. Until a vaccine, down here there is far less in its way given the high-density living conditions of multiple generations under one roof and packed public transportation. Even Sweden admits its strategy wouldn’t work in Brazil. Thankfully, the Northeast at least has Nicolelis and the C4.

When Nicolelis found out about Sergipe’s reopening plans, he publicly asked our governor to reverse his decision, putting him in an extremely uncomfortable but necessary position. Hours after Nicolelis’ public plea, our governor reversed the reopening, remaining closed even through today. Our governor cited Nicolelis and the C4 as having a weighed heavily in his decision to reverse. If the C4 had not existed, without doubt Sergipe would’ve reopened way back in the beginning of May and our health capacity would’ve likely been drowned by now. Sergipe’s current ICU occupancy is ~75%, so one can only imagine if we had opened six weeks ago. In the meantime, Sergipe has been rapidly working to increase health capacity with a field camp and more ICUs, which should increase by over a third by July. Simply put, Nicolelis and the C4 saved many lives in Sergipe.

In addition to advising the governors, the C4 advises the population through public bulletins (eight to date) and a website full of science articles, maps, and stats that updates them on the current scenario with recommendations. In the latest bulletin, for each state, the C4 created a colored-guided map based on a risk matrix for key areas: Pressure on Health System, Local Epidemic Status, and Social Isolation/Geographical Influence. Below is the map for Sergipe. And unlike the OAS, the C4 is publicly transparent with the calculations behind the analysis. 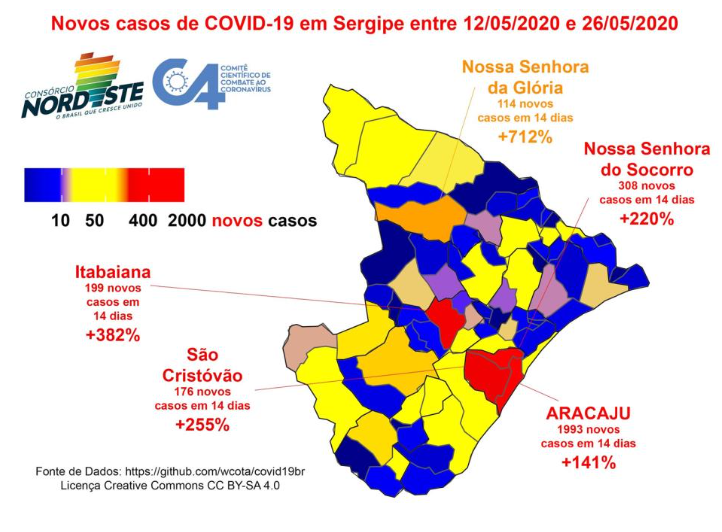 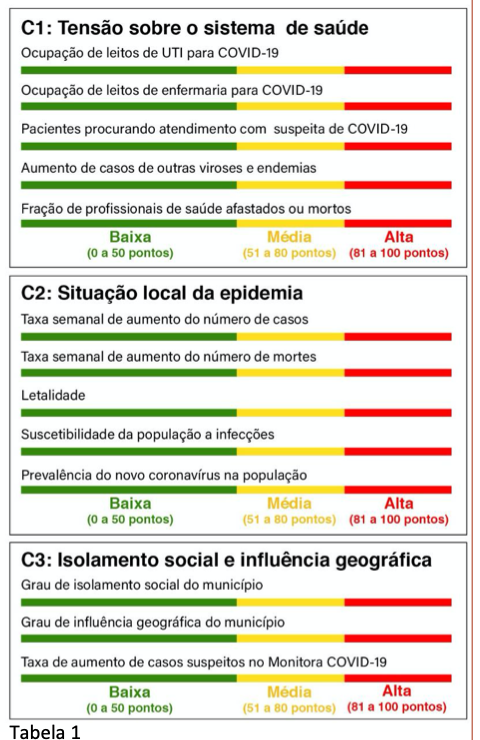 Beyond advising, the C4 has developed a COVID symptom-tracking + TelMed app that directly collects public information and directly connects citizens to medical staff. Since the federal government is barely testing, the app is trying to make up for as much as possible. Although the app downloads are still far below the goal of one million, the C4 is maximizing the limited resources it has to cover the huge void left by the federal government.

The C4 has even caught the attention of other Latin American countries, such as Panama and Argentina. Officials in Panama told Nicolelis that they are constantly using the C4 material, while scientists from the federal University of Buenos Aires in Argentina recently had Nicolelis participate in an online meeting. The Argentines were well attentive to Nicolelis and appeared to be on board for his proposal of a Latin American Science Consortium. If this consortium were to be developed with the same energy and speed that has undertaken the C4, then Latin America could launch itself into space within years.