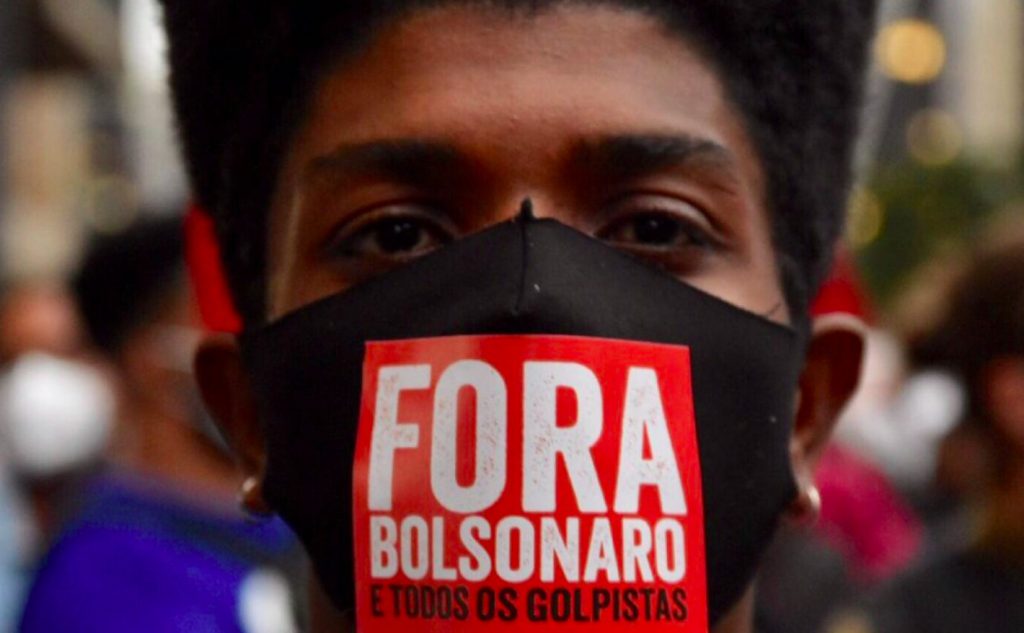 May 29 Protests: Horror At Bolsonaro Beat Fear Of The Virus

This is what they were saying on Saturday as hundreds of thousands of people came to the the streets across the country: Bolsonaro is worse than the virus. It was time to overcome fear and, taking the necessary cautionary measures, show that the majority of the Brazilian people (57% according to a poll by Poderdata) can’t tolerate the genocidal leader and demand his impeachment, along with more vaccines and emergency support of R$600/month during the remainder of the pandemic.

Bolsonaro, the unbearable, received the news in his best style of unlimited vulgarity. He posted a selfie on his social media accounts wearing a T-shirt that said, “immeasurable, unbroken, unscrewable”.  How this guy deifies himself. What a fixation he has on sex and his own phallus!

He passed on his pimply message knowing that the success of the protests on this sunny Saturday changed the political conjuncture. Beforehand, things were going well for him. With no vaccines and the virus running rampant, the streets were empty. Now things have changed. Other protests are coming and, if before his excuse was that there weren’t people on the streets,  Congressional President Artur Lira will now have a hard time sitting on over 100 impeachment requests.

The congressional Covid 19 investigation, which with every testimony is clearly revealing Bolsonaro’s responsibility for the deaths, is exposing his negationism and cruelty, has already caused Lira to say that he will start examining the impeachment requests. Hurry up, Lira, before the train runs you over. Lira is a typical center-right opportunist: he hasn’t rejected any impeachment request, nor has he brought any to the floor. Sitting on the fence, he preserves his power of blackmail over the genocidal President, who he may think is immoral but who will not be in charge forever. If he doesn’t fall through impeachment, he will lose to Lula in 2022.

Speaking of Lula, I read analyses on Sunday that attributed the protests to a strategy of his, and others that complained about his absence and silence on the first rumble from the streets.

Lula was correct in not going. The protests were led by the Povo sem Medo and Brasil Popular fronts and the Black Coalition for Rights, not by political parties, although PT, PSOL, PC do B, PCO and PCB all supported them. They materialized a popular and super-partisan popular front against Bolsonaro, in defense of vaccines and social safety nets. If Lula had gone, he would have been accused of electoral opportunism.

Furthermore, his presence would have contradicted his stance as an ardent supporter of social isolation and in combination with mass vaccination. His silence during the first hours of the protests was a sign of his respect for those who, overcoming their fear of the virus, took to the streets to say it was no longer possible to tolerate Bolsonaro in the presidency. As the current electoral favorite, he respected the non-electoral nature of the protests. But, even if not everyone who protested will end up voting for him, the current flowed for his candidacy last Saturday.

Tereza Cruvinel is a columnist and commentator for Brasil 247, founder and ex-President of Brazil’s public television network EBC, and ex columnist of O Globo, Jornal do Brasil, Correio Brasiliense, RedeTV and other outlets.

This article originally ran in Brasil 247, was translated by Brian Mier, and can be read in its original Portuguese here.