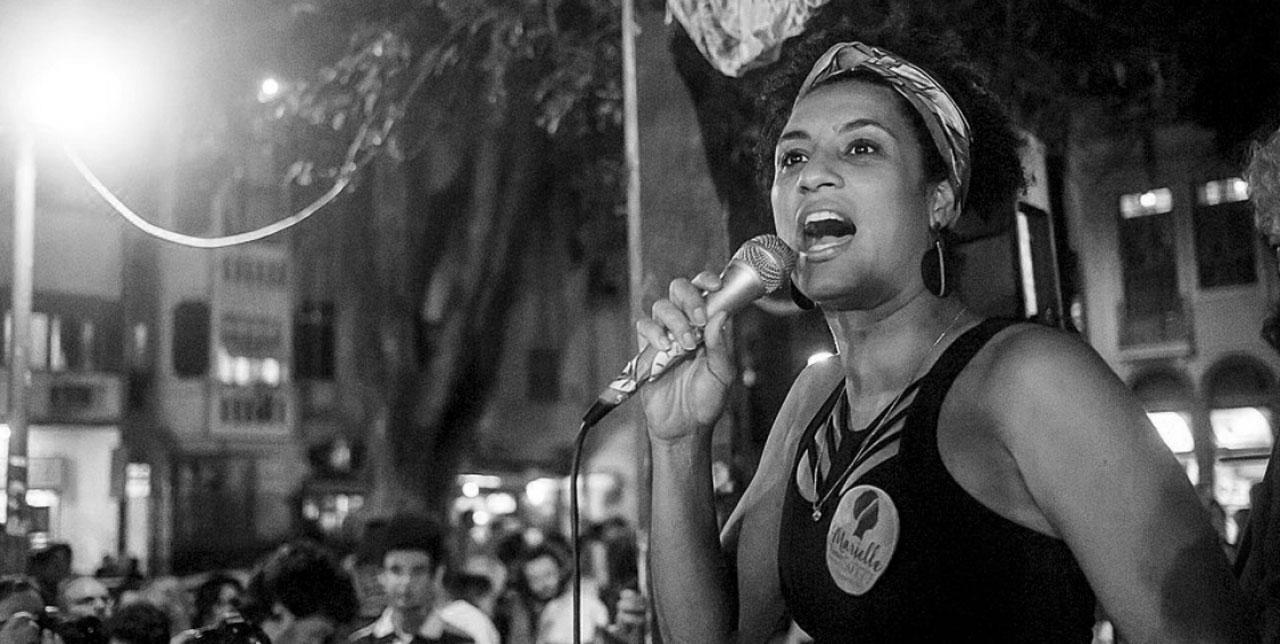 Marielle’s Murder And The Newspapers

When  Rio City Councilwoman Marielle Franco was assassinated on March 14, much of the international coverage omitted the fact that she was a socialist and the most prominent critic of Rio de Janeiro’s federal military occupation. In this article from the Rio de Janeiro State University (UERJ) Manchêtometro project, which quantifies bias in media coverage, academics João Feres Jr. and Juliana Gagliardi look at how two of Brazil’s most important newspapers attempted to depoliticize Franco’s death and use it as an excuse to support the Brazilian military. Translated from the original Portuguese by Brasil Wire.

The writings about the assassination of City Councilwoman Marielle Franco, from the Socialism and Liberty party (Partido Socialismo e Liberdade/PSOL), last March 14 in Rio de Janeiro, cannot be disconnected from debates about the Federal military intervention underway in the state. This is not only because it was one more violent death to add to the high homicide rates, but down to the fact that Marielle had the most votes of anyone from her party and practiced an active agenda in the defense of human rights. More than this, the PSOL City Councilwoman was the rapporteur for a commission that was set up to monitor the military intervention, that was recently created in the City Council.

A black woman, raised in Maré favela, single mom and homosexual, Marielle was critical of the Federal military intervention in Rio de Janeiro. In a facebook post dated February 16, she said the immediate effects of the intervention would be: “more violence against the favela population, more young black people dead and abuses committed by the armed forces judged in the military justice system, whose courts are composed of other military officers” and a “false sense of security for the higher classes who will think that things are getting better.” Two days later, on February 18, she released an invitation to the protest against pension reforms and the military intervention that was scheduled for the following day. On February 20, Marielle gave a speech in the City Council in which she called the intervention, “absurd”. On the following day (2/21) she called the intervention a “farce” on her facebook page.

Shortly before she was assassinated, she sent an article to Jornal do Brasil newspaper which was published posthumously on the front page (March 16), reaffirming that the justification for the military intervention was not based on reality, since Rio de Janeiro is only ranked as the 10th most violent state in the national Public Security report, behind other states like Sergipe, Goias and Maranhão. According to Marielle, “you don’t do public security with more guns, but with public policies in all areas.” Her text emphasized that the recent experiences with Armed Forces occupations in the state did not solve the problem of insecurity and that what they had in common was not  responding to alarming episodes in public security, but the fact that they took place during election years.

How did the big media approach her positions in the context of her death? In Jornal do Brasil, coverage of Marielle’s assassination appeared on March 16, in four pages of the City section. The editorial on the same day highlighted the critical position of the City Councilwoman regarding the intervention, while simultaneously reinforcing the newspaper’s position that the Federal Government’s intervention was “necessary” because there was no other way to solve the public security problem in Rio. Whereas, in Marielle’s words, it was the most vulnerable population (blacks, the poor, favela residents) who would end up being most damaged by this type of measure, for the newspaper, “the intervention does not act with actions inspired by prejudice, but on concepts”. The newspaper affirmed that “the opportune and respectful repairs that are suggested by the last proclamation of the City Councilwoman do nothing more than contribute to the correct interpretation of the facts and the reality that we live in in Rio de Janeiro.”

On the day after the assassination (March 15), O Globo newspaper limited its coverage to the top half of the front page and a full page of the City section, which covered Marielle’s political activism. The editorial, however, did not comment on the case, preferring instead to return to the narrative of strengthening institutions to fight corruption, with criticism of the PT party. On March 16, after the great repercussions from the crime generated protests around the World,  the coverage was much greater. The story occupied the entire front page, six pages of the City section, an editorial and was discussed by several columnists. There was ample coverage giving to Marielle’s case, covering the themes of her political struggle, the denouncements made by the Councilwoman and her criticism of the military intervention in Rio.

The editorial on this date – “Assassination of City Councilwoman is an affront to democracy” – mentions that Marielle was a “critic of violence” and had “denounced an action by Military Police from the Irajá precinct in Acari Favela”. But it argued that the assassination was “a blunt symbol of the lack of control over Rio’s security, a state of anomie which triggered the federal intervention.” The editorial ended calling for a quick and efficient investigation, and highlighted the case as an “opportunity to exercise a real job of integration between the diverse security forces involved in the federal intervention in Rio.” In short, O Globo used the death of the city councilwoman to reinforce and legitimize the federal military intervention, using the editorial to express a contrary opinion to that of Marielle’s.

On March 17, o Globo dedicated another editorial to Marielle. It was entitled, “Sectorizing Marielle’s death is a disservice”, and we highlight the following excerpt:

“That fact that Marielle was a City Councilwoman from the PSOL is on the back burner. The people effected are all of those who have obtained political representation by voting, all of the electorate and the very democratic state of law. The idea that the City Councilwoman represented a troika of “black, woman, favela residents”, so used in proselytism, also has to be put in perspective. What matters is that the bandits, with this assassination, are showing that they have the power. If Marielle were “white and rich” the execution would have to provoke the same reaction from the State and society. Marielle’s death can not be appropriated by political or sectarian interests. (…) In this sense, it was comforting to see, in the aerial footage this Thursday by GloboNews, that red was not the predominant color in the [protest] crowd in Cinelândia.”

The editorial proposes to disconnect the death of Marielle from its place of origin and remove it from its ideological base. This passage shows the reaction of the newspaper to the possibility that the crime against Marielle could promote her political party or progressive agenda. Once again, O Globo worked to mitigate if not declassify Marielle’s agenda, even if they gave her some coverage.

O Globo was not the only newspaper to adopt this position. On March 17, in an editorial entitled, “The assassination of a City Councilwoman”, O Estado de São Paulo newspaper also commented on the case. Like O Globo, it spoke of the need to “swiftly find and punish the people responsible”. Like it’s Rio counterpart, O Globo, the editorial stressed that: “Until the conclusion of the investigations, we need to maintain an even keeled serenity. The use of Marielle’s assassination for political objectives does nothing to contribute to solving the case and much less for the pacification of Rio de Janeiro”. The newspaper stressed that until the case is solved, “any suggestion that the crime is political – that is, that the City Councilwoman was assassinated due to her work in the Rio de Janeiro City Council in defense of the rights of the residents of favelas and poor neighborhoods – is presumptuous and will lead to opportunistic speeches.” Afterword, in a surreal manner, the editorial attacked the PT party, criticizing Lula and Dilma for showing solidarity with the PSOL party and Marielle’s family after the death of the councilwoman.

Finally,  an editorial in the Folha de São Paulo on March 16, entitled, “Who killed Marielle?” places more emphasis on Marielle’s activism in favor of groups she belonged to (against racial discrimination, for woman’s and GLBT rights, criticism of illegal actions by the militias and police in the favelas) as well as citing her as a critic of the federal military intervention, highlighting that this government action is provoking more questions than hopes.

In conclusion, we can affirm that O Globo and Estado de São Paulo newspapers assumed a militantly conservative posture by rejecting the issues and struggles that were defended by Marielle, trying to disconnect her death from any connection with the federal military intervention underway in Rio de Janeiro. Furthermore, both used the tragedy to attack the left and especially Lula and the PT, even though the party had no direct relationship whatsoever with what had happened. This time, Folha de São Paulo newspaper distanced itself from the others in its editorial position.