An open letter in defense of Brazil’s democracy against the Bolsonaro government’s preemptive attempt to sabotage this year’s elections, drafted by the São Paulo Federation of Industries (FIESP) has quickly gathered over 1 million signatures. On August 11, Brazilian National Students Day, crowds in the thousands gathered at dozens of public universities where the letter was read out loud, simultaneously. Afterwards, the crowds took to the streets to defend the public education system and protest against the far right Bolsonaro government. Below is the letter in full, translated into English by Luís Felipe Bretas Marzagão & Natalia de Campos.

In August 1977, during the 150th anniversary celebration of Brazil’s first law school, Professor Goffredo da Silva Telles Junior read a Letter to Brazilians from the free territory of São Francisco square. It exposed the illegitimacy of the military government and the state of exception the country was experiencing. It also demanded the reinstatement of the democratic rule of law and called for a national constitutional assembly.

The republican Executive, Legislative and the Judicial powers are independent. Their duty is to respect and ensure that our Magna Carta, the Federal Constitution, is upheld.

Under the 1988 Federal Constitution, which is nearing its 34th anniversary, we have held regular, free elections so that the political debate on projects for our nation has remained democratic, with final decisions made through popular sovereignty.

Goffredo’s teachings are embedded in our Constitution: “All power emanates from the people, who exercise it through their elected representatives or directly under the terms of this Constitution”.

The electronic voting system used in our elections has set an example to the world. We have had several transfers of power based on the vote and the republican transition of governments. Electronic voting machines have proven to be safe and reliable, as has the Superior Electoral Court.

Our democracy has grown and matured, but much remains to be done. We live in a country of profound social inequalities that lacks essential public services such as healthcare, education, housing and public safety. We have a long way to go to develop our economic potential in a sustainable manner. The State has been inefficient in the face of numerous challenges. Demands for greater respect and equality for race, gender and sexual orientation are still far from being fully met.

In the coming days, in the midst of these challenges, the election campaigns will begin, aiming to renew mandates for lawmakers and executive leaders at the state and federal levels. This is a moment in which we should be celebrating democracy through a race between different political projects that are designed for winning elections  by presenting the best proposals for our country’s future.

However, instead of a civic celebration, we are experiencing moments of immense threats to democratic normalcy, risks for the republican institutions, and signs of contempt towards election results.

These baseless attacks, which lack evidence, cast doubt on the electoral process and the rule of law that was arduously fought for by Brazilian society. Threats to other institutions and sectors of civil society and incitement of violence and the breaking down of constitutional order are intolerable.

We recently witnessed authoritarian rants that jeopardized the USA’s historic democracy. There, the attempts to destabilize democracy and the people’s confidence in the fairness of the elections were unsuccessful. Here, they won’t succeed either.

Our civic consciousness is much greater than the enemies of democracy would imagine. We know how to put aside minor differences in favor of a much larger ideal, that of defending the democratic order.

We are charged by the same civic principles that marked the 1977 Letter to Brazilians and are gathered here in the same free territory of São Francisco Square, regardless of our electoral or partisan preferences, to call on all Brazilians to remain alert in defense of democracy and in respect of the election results.

In today’s Brazil there is no room left for authoritarian setbacks. Dictatorship and torture belong in the past. The solution to the great challenges  faced by Brazilian society must be subject to the election results. In our civic watch against any attempted ruptures, we cry in unison: 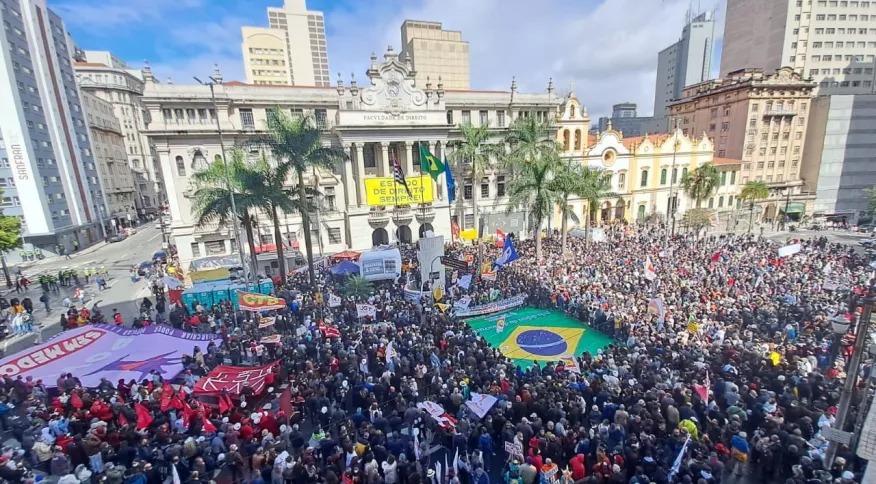 The original letter can be signed here