I’ve thought a lot about the paths that our lives take. The future, after all, does not seem to be such a distant place, does it?

It’s not that my life has been easy… Far from it.

I’ve felt what happens to a forgotten people in the skin, but I know that no clothing is so heavy that it can’t carry it.

Whoever has survived after passing through so much hardship learns, from an early age, that honor is our most valuable asset.

Along the way, I’ve met many people who only needed an opportunity to walk with their own legs and have the dignity to build their own lives.

A country with no hunger, with a school, a house and a job for everyone.

I look back and see that I could have done more. It was always possible to do more. But the opportunities that we created in a country that is so unequal and unjust still seem greater than our difficulties today.

I have already been imprisoned once. My life was turned upside down. My family was persecuted and I lost my eternal companion… I am not afraid of what lies ahead.

If I only have one minute of life left, this minute will be used to fight for the dignity of our people, and to defend our honor.

It’s the honor of a boy who crossed the country to overcome hunger and became a shoe shine boy. Of an adolescent who became a young factory worker. Of a man who became a father and fought against all forces to represent the Brazilian people.

During the afternoons of uncertainty in my youth I never imagined it could be possible. But it was. I became the President of the Brazilian people.

Those who condemn me without proof know that I am innocent and I governed honestly.

Those who persecute me can do what they want to me, but they will never imprison our dreams.

An affectionate kiss from Lula. 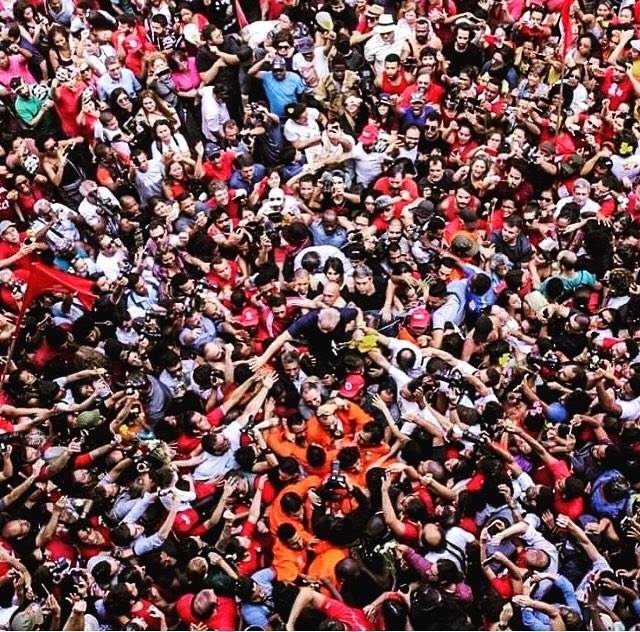 Former President Lula carried by supporters following his speech at the Metalworkers Union in São Bernardo do Campo where he made his political name in the 1970s and 1980s.