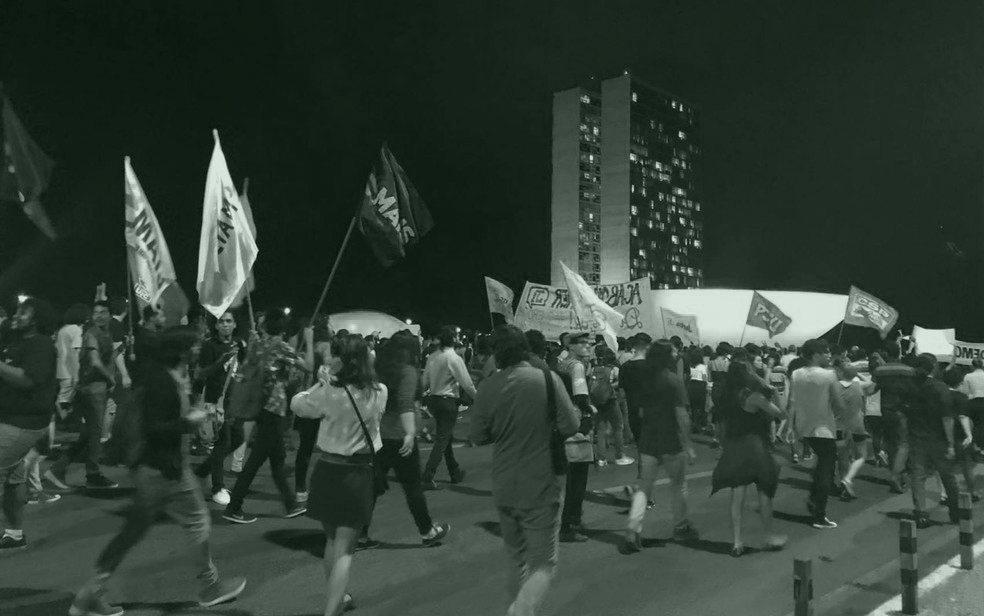 Joao Pedro Stedile, leader of the Landless Rural Workers’ Movement (MST) and of the People’s Brazil Front, analyzes the Brazilian political scenario, the role of the O Globo media network, the internal divisions among the putschists, and speaks about the need of building a transition government and the people’s project of Brazil.

Brasil de Fato: Why does the Globo network need to publish the audio recordings that incriminate Michel Temer and why do they insist on indirect elections?

João Pedro Stédile: The Globo network became the main party of the Brazilian bourgeoisie. It protects the interests of capital, uses its force of manipulation of public opinion and coordinates with the ideological sectors of the bourgeoisie, which include the Judiciary Power, some procurators, and the press in general. They know that Brazil and the world are going through a serious economic, social and environmental crisis, caused by capitalism. That, in Brazil, became a political crisis, because the bourgeoisie needed to have hegemony in Congress and in the federal government in order to apply their plans to put all of the negative effects of the crisis on the shoulders of the working class. Therefore, the Globo network is an ideological author of the coup.

To them, putting Temer in power after Dilma’s impeachment was a faux pas, since his gang is full of lumpen politicians, opportunists and corrupts, who weren’t concerned with the bourgeois project for the country–they merely cared about their own pockets. The “weak meat” operation was another faux pas that helped discredit the PMDB (Temer’s party) since many of them were involved and ended up provoking a sector of the agroexporting bourgeoisie. Now they need to create an alternative to Temer. The way out of this will be decided over the next few hours or days, whether he resigns, or is judged by the Supreme Electoral Court or if the impeachment requests that were submitted to Congress are passed. Over the next few days the successor will be chosen, and many factors will influence that. The outcome won’t be the fruit of some Machiavellian plan by a particular sector (like Globo) but of the class struggle, and how that struggle plays out over the next hours, days and weeks.

How is the putschist sector reacting?

The sector that reached power through the coup is internally divided since 2014. And that helps us. Because in previous coups, like the 1964 one, and during the 1994 government of Fernando Henrique Cardoso, the bourgeoisie was united, under a single command, a single project for the country and a strong rearguard in US capital. Now, they don’t have a project for the country, they lost their US rearguard (because they were allied with Hillary Clinton) and want to salvage only their own particular interest. In the words of José de Souza Martins, sociologist of the PSDB party, “reforms in retirement and labor policies are capitalist measures that increase exploitation of workers, but they’re also measures that go against a capitalist project for the country’.

The putschists also don’t have a unified command. They’re divided into the sector with economic power (which includes Minister of Finance Henrique Meirelles, and the company that denounced Temer, JBS), the group of PMDB lumpens (Romero Jupé, Eliseu Padilha, Temer himself, Moreira Franco), who have power over the law but are beginning to crack, like Renan Calheiros. There’s also an ideological group made up of Globo and the Judiciary Power, but there are many internal contradictions among them. That’s also why they don’t know who to put in place of Temer. Their ideal solution would be to take Lula out of the picture, make a transition government that the majority of the population accepts (it could be even led by Minister Cármen Lúcia) until October 2018, and then try to win the elections.

But their internal division also affects the candidacies, since they can’t manage to construct a candidate like Henrique Cardoso or Fernando Collor. They’re testing the public opinion, presenting João Doria (current Mayor of Sao Paulo) or Luciano Hulk. But the polls show they’re not viable and they know they would deepen the political crisis.

In this context, what can workers and people’s organizations do?

We, at the People’s Brazil Front,  which is made up of over 80 people’s movements and political organizations, are debating since last year that the best interest of the working class is in a packet of measures that complement each other.

First of all, to take the putschists down and suspend every legislative measure they have taken against the people. Then, having a transition government that calls to presidential elections on October 2017 and discussing a way to make an immediate political reform that guarantees that the will of the people is respected, and voting for a new Congress.

Another item is for the new government to commit to convene an Exclusive Constituent Assembly to build a new “Emergency Plan for the People” which includes over 70 emergency measures that the transition government and the new government will have to implement, which we believe would take the country out of the economic, social and political crisis.

During the electoral campaign we need to discuss a new model for the country, which takes into account the need for structural reforms in the mid-to-long-term, such as a tax reform, a reform of media, the agrarian reform and a reform of the Judiciary Power itself. But in order for all of this to be possible, the masses need to take to the streets urgently. The strength of the people is exercised there, in mobilizations, occupations and pressure.

I believe that over the next few hours and days there will be plenary sessions to discuss specific dates for mobilizations. On our side, we believe that next week is decisive. We need to camp outside the Supreme Federal Court in order to ensure the putschists resign and the corrupt officials denounced by Joesley Batista go to prison. We need to make mobilizations in all capitals and big cities next Sunday 21. We need to transform May 24 into a nation-wide mobilizations, occupy Legislative Assemblies, routes, everything. The people needs to take the lead and put pressure to achieve the changes we need.

Can direct elections benefit the country? How? Who would the candidates be?

Of course, direct elections for President and for a new Congress are indispensable for democracy and to get the country out of the political crisis. Only through urns can we attain a government that represents the majority and has the legitimacy to make changes for the people that also allow us to leave behind the economic crisis. Because the economic crisis is the foundation of the whole social and political crisis. The candidate of the working class is Lula da Silva, who represents the vast majority of the Brazilian people, and can commit to a project of change and support our emergency plan.

There will probably be other candidates, like Bolsonaro, who represents the far-right, and Marina Silva, who tries to attract a centrist electorate, but her real voter base is only the Assemblies of God Church. The tucanos are in crisis, because ALckmin is involved in several denounces. Doria is a cheap playboy. And the Globo network hasn’t had time to create an alternative, like Collor was in 1989.

What’s the way to prevent the backlash of the putschist agenda?

To mobilize, fight, and not leave the streets. We need to work in the upcoming days on the possibility of a general strike with indefinite durations. All of our social militancy and the readers of this newspaper need to be in a state of alert, since the next few days will be decisive to define the destiny of the country. The strength of the working class is only expressed on the streets.