CUT Trade Union Confederation estimated 35 million across Brazil participated in the General Strike, making it the biggest in decades.

Paulistanos awoke to an unprecedented quiet, a city without buses, commuter train, or subway services. Roads to Airports were blocked, Schools and banks were also closed as striking union members, furious that their retirement ages could rise as high as 74, refused to show up to work.  In thousands of locations across Brasil,  groups of protesters shut down major thoroughfares during rush hour with barricades and burning tires. The general strike was called by the Frente Popular Brasil and the Povo Sem Medo, two broad based coalitions of labour union federations, social movements and student organisations, that refuse to recognise Michel Temer as President and is calling for his immediate removal and direct elections.

On the eve of what now appears to be the largest general strike in decades, 2018 Presidential hopeful, former “Apprentice” reality TV show star turned São Paulo Mayor João Doria, promised to reimburse his staff for their Uber fares to work, which he insisted would be a regular work day like any other. He quickly backed down on his offer after someone in his staff calculated the cost. Some Workers at his Pinheiros district office were instructed to sleep over on the premises to ensure they were ready to work in the morning.

At 7AM on Avenida 23 de Maio, one of São Paulo’s busiest roads, several hundred members of the Central de Movimentos Populares (Popular Movement`s Central/CMP) and the Movimento Sem Terra (Landless workers movement, or MST) brought traffic to a standstill for 40 minutes by burning a wall of tires. On the eve of the general strike, Gege, national leader of the CMP remarked “If everything goes as planned we will certainly have a change. And this change will be, fundamentally, for the survival of the Latin American left.”

As reports of public transport and airport shutdowns and highway blockages poured in from across the country, it appeared that the Frente Brasil Popular and Povo Sem Medo had achieved their goal.

In the early hours, Rio de Janeiro, Santos Dumont Airport was temporarily closed, and the 8.5 mile long  Rio-Niterói bridge was blocked by protesters in vehicles.

In addition to the closures and paralysation of transport, hundreds of thousands across the country took to the streets of Brazilian towns and cities to protest against the removal of their rights by an unelected Government.

National and International media who supported the Coup of 2016 reduced the action of millions of Brazilian workers to a cartoon of vandalism & violence.

TV Globo, echoing their misrepresentation of the 1984 Direitas já protest for an end to the Military Rule which they supported, avoided use of the term General Strike to describe what was happening. On Thursday night, Globo’s flagship Jornal Nacional news show omitted any mention of the Strike whatsoever. Veteran Journalist Bob Fernandes remarked that Brazil’s media informed the public in advance of the Anti-Dilma Rousseff demonstrations of 2015 and 2016, whereas they did not acknowledge the General Strike until it was actually occurring. 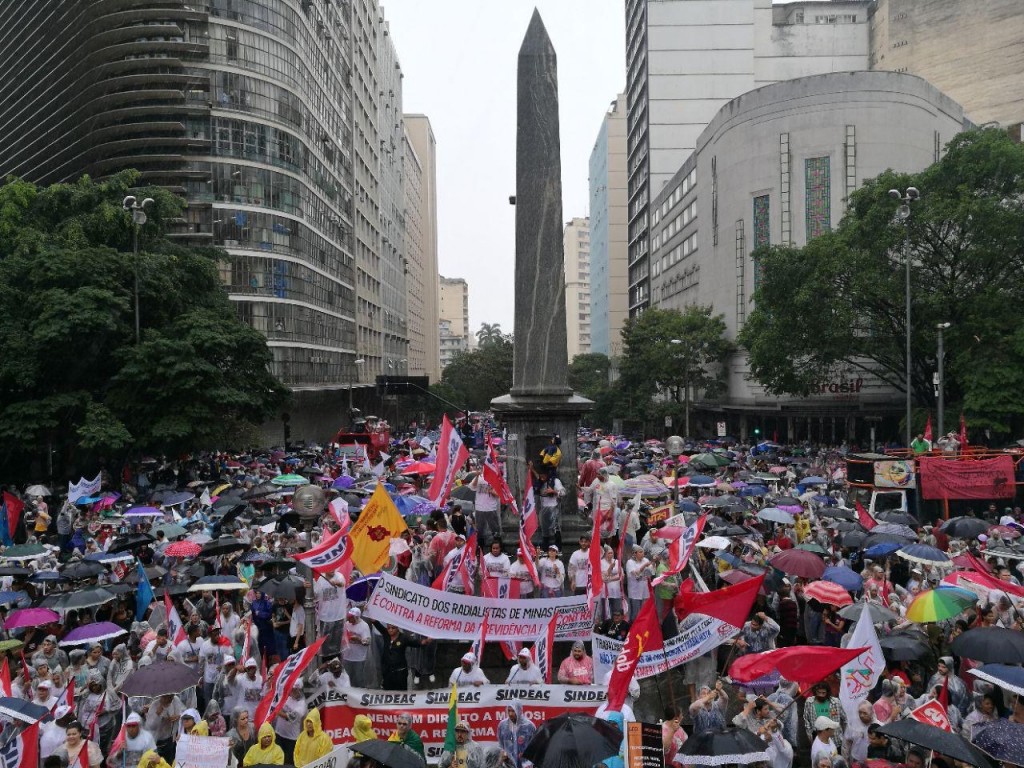 In Rio de Janeiro and São Paulo the Military Police’s truculence again contrasted with their enthusiastic participation during Right Wing protests against Dilma Rousseff, however in some States, Civil Police joined the General Strike itself.

In Rio’s Cinelândia, a bomb fired by Military Police landed on the stage where speakers, including opposition politicians, were addressing demonstrators. If these events occurred in Venezuela there would be a coordinated international media outcry.

The demonstrators appeared to win on social networks, despite a mysterious anti-strike hashtag trending in India, prompting questions about who paid for the legion of Twitter bots which made this anomaly happen.

On the day which brought the strongest resistance yet against an unelected Government pushing through ‘Shock Doctrine‘ style reforms, Eurasia Group’s Ian Bremmer had an article published in Time Magazine which dramatically misjudged Brazil’s situation and the public mood. In it he actually praises Temer’s brutal programme of cuts to rights and social security, which includes a 20 year constitutionally enforced freeze on investment in public education & health which has been dubbed the “End of the World amendment“. His position reflects US support for the direction Brasil is being forced against the will of the electorate.

Huge traditional labour day celebrations are scheduled across the country for May 1st. In São Paulo the CUT rally on Avenida Paulista will go ahead despite prohibition by Mayor João Doria.