Spokesperson for the Mossad-linked Israeli company CySource, Hélio Sant’Ana was IT director at Palácio do Planalto during the Bolsonaro government, and has been found to have spread disinformation about the 2022 election.

One of the representatives of the Israeli company CySource, which is in a technical cooperation agreement signed with the Brazilian Army’s Cyber ​​Defense Command – the sector that will supervise the electoral process – has published false news and research about the Brazilian voting system.

Brasil de Fato located at least 7 publications in which misleading information was shared by a Twitter account of systems analyst Hélio Cabral Sant’ana, former director of Information Technology at the General Secretariat of the Presidency of the Republic and CySource’s representative in the agreement with the Army.

Hélio Cabral Sant’Ana is linked to federal deputy Eduardo Bolsonaro (PL-SP). He is also the brother of Sérgio Cabral Sant’Ana, a former advisor to the Ministry of Education in the government of Jair Bolsonaro (PL) and executive director of the Instituto Conservador Liberal (ICL) , which is chaired by “03”, Eduardo’s nickname. .

Among the lies and fake news published by the CySource employee, are electoral polls without registration with the Superior Electoral Court (TSE), which violate legislation, and an open campaign for Bolsonaro, the Liberal Party candidate for reelection. Some of the posts were labeled fake by Twitter itself. 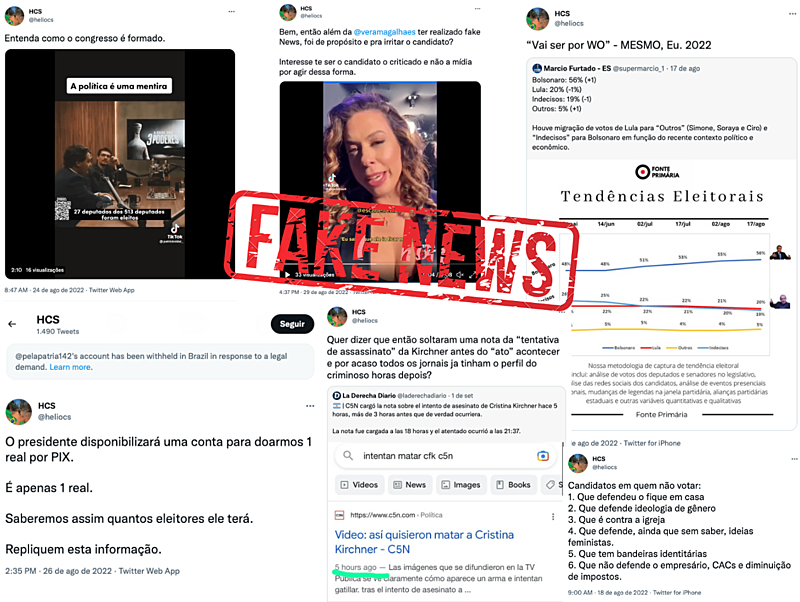 The Federal Court of Auditors endorsed the cooperation agreement between the Army’s Cyber ​​Defense Command and CySource. The contract  had been considered by the Federal Public Ministry (MPF) as a strategy to threaten the electoral process, and tried to halt it.

But, in a decision published on the 27th August, the First Chamber of the TCU unanimously ruled that the MPF’s action was unfounded, then closed and shelved the case. The full text of the judgment is available on the Court’s website. Click here to download the document.

Deputy Attorney General Lucas Rocha Furtado, from the MPF, despite having filed the lawsuit with the Court of Auditors, did not intervene in the trial, which paved the way for it to be shelved. The reporter questioned Furtado’s office on the subject, but there was no response.

The case, revealed exclusively by Brasil de Fato in May of this year, was considered by the Court after Deputy Attorney General Lucas Rocha Furtado pointed out that the agreement has indications of misuse of purpose and that it may jeopardize the October elections .

Threat to the electoral process

In the petition that gave rise to the lawsuit, the MPF argued that General Héber Garcia Portella, the Army’s Cyber ​​Defense Commander, had already been appointed to the Elections Transparency Commission (CTE) when he signed the contract with the Israeli company.

“In my opinion, it is unacceptable that the structure of the Brazilian Army is used to meet a whim of Jair Bolsonaro, who has insistently questioned the security of electronic voting machines and the electoral counting procedures adopted by the Superior Electoral Court”, he argued.

Furtado points out that Portella often “has reinforced Jair Bolsonaro’s rhetoric in the sense that the Brazilian voting system contains risks and weaknesses that could compromise the fairness of the elections”.

For this reason, according to him, the agreement was concluded “not with a view to satisfying a public purpose, but rather in flagrant deviation of purpose, with a view to investigating the alleged risks and weaknesses of the Brazilian voting system”.

In recent days, bolsonaristas have used the agreement between the Army and CySource to argue that the military has the technical capacity to question the Brazilian electoral process. One of the posts made by a supporter of the president even went viral on Twitter. 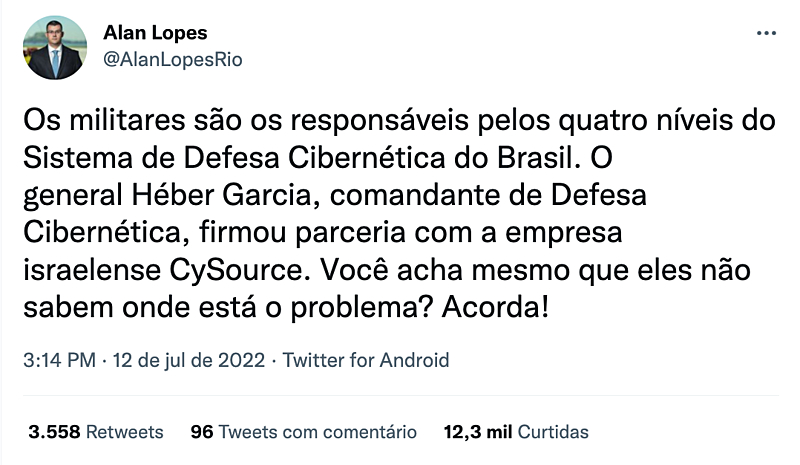