Brasil Wire correctly called the 2016 Coup, corruption in the Lava Jato investigation and fraudulent rise of Bolsonaro in real time because we read and respect Brazil’s vibrant and sophisticated alternative media. Why do northern commercial journalists systematically ignore it?

My father taught me how to read the newspapers when I was 7 years old. “See this?” he said, “this is the Chicago Tribune. It’s Republican. This here is the Chicago Daily News, it’s Democrat. If you want to figure out what is really going on read both and read between the lines then make up your opinion for yourself.” Granted the lines between Democrats and Republicans have thinned and the Daily News folded in 1978, but my father’s advice about triangulating sources remains solid. The problem is that in Brazil, 100% of the major newspapers, television and radio stations are ideologically aligned with the Chicago Tribune and there is no Chicago Daily News. Everyone who has studied Brazil knows that the Military Dictatorship set up Globo TV network in partnership with Time in the 1960s to use as a means of conservative social control, and then gifted it to cronies in the Marinho Family. Globo and its ideological allies Folha de São Paulo, Veja and Estadão have a long history of heavily manipulating Brazilian politics in favor of conservatives which has been well documented for decades.

Brasil Wire arose in 2014 in response to a Coup that was in the works against the PT party and its successful democratic socialist project which lifted 40 million people out of poverty and reduced Amazon deforestation by 84%. If you look back at our writings now, most of them stand the test of time. While mainstream journalists were bending over backwards to explain that everything was fine in Brazil, that its “robust” democratic institutions were working normally and deriding people who suggested a coup was underway in their twitter echo circles, we provided balanced and factually correct analysis of the disintegration of the rule of law and warned of the encroachment of neofascism. Now that the documentary The Process has fully exposed the impeachment as farce, Michel Temer has publicly admitted it was a coup and the Intercept has proven that the US-backed Lava Jato investigation collaborated illegally with the Federal Police and Globo television network to help make it happen, those journalists appear to have either deliberately normalized the rise of an illegitimate, right wing regime in favor of their corporate sponsors who benefited financially from the Coup, or did not understood Brazil well enough to write about it.

One would think that the first thing any journalist would do arriving in a new country is try to find out what the conflicting media narratives are and read them to triangulate information – like my father taught me how to do when I was 7. 47 million people voted for the PT party in the last presidential election which, proportionately, is a higher percentage of eligible voters than that of Americans who voted Democrat in 2016. You would think that, at the very least, a professional foreign correspondent who works for a paper whose editorial department endorses the Democrats or Labour would seek out a few publications whose editors support the PT to counter what they are reading in Folha de São Paulo. Why not go further and read sources that are connected to organized labor and the social movements? Instead, there are Anglo Brazil specialists who build reputations as progressive’s based almost entirely on what they read in Brazil’s conservative commercial media oligarchies. One example is Alex Cuadros, who is viewed as a progressive in some circles despite his Cato institute and Bloomberg connections.

In Miguel do Rosario’s 2017 article Alex Cuadros: Journalistic Vanity at the Service of Empire, published in O Cafezinho (a blog with 480,000 Facebook followers) he criticizes Cuadros’ failure to challenge the Lava Jato investigation and ignorance of the mounting criticism against it in the legal community:

“Since Cuadros is a reader of the Folha de São Paulo and its columnist Josias de Souza, maybe he doesn’t know what has been flourishing in Brazil – a rich bibliography on the rising authoritarianism of the Brazilian judiciary, authored by our most competent legal scholars. I suggest he read Lenio Streck’s columns in Conjur, for example. In The Post-Democratic State, launched a few days ago, Judge Rubens Casera makes a dark, painful and terrible denouncement against the judicial fascism which is spreading across the country – about which journalist Alex Cuadros, precisely due to his addiction to only reading about Brazilian reality through its big communications mediums, must not have enough information.”

Not only do the majority of Anglo correspondents systematically ignore Brazil’s ethical and popular progressive media, when they do mention it at all it is typically to discredit it, as Tom Phillips, who spent months sucking up to Trump’s right wing narco-golpista Juan Guaido for the Guardian, did in a tweet criticizing national PT President Gleisi Hoffmann for attending Nicolas Maduro’s inauguration in Venezuela last January.

Brazil’s left, alternative media arose as a collective strategy do build a space of counter hegemony in the national media landscape, with important publications born during popular assemblies with social movements and labor unions in the World Social Forum. Due to a thirst for alternatives to decades of biased coverage in the commercial media, many of Brazil’s most popular alternative media venues have higher readership than similar publications in the US, which has a 35% higher  population. For example, while Jacobin, Truth Dig and In These Times, have around 750,000 Facebook followers between them, Revista Fórum has 770,000.

The following is an introduction to 4 of our favorite alternative media voices in Brazil. None receive international foundation funding. Most don’t run advertisements.

Brasil de Fato was founded during a democratic, popular assembly in the 2003 World Social Forum by social movements including the MST, Via Campesina and Liberation theology organizations such as the Pastoral Land Commission and has maintained close ties to these groups ever since, guaranteeing that their ethical standards are higher than, for example, The Guardian, which has ties to HSBC bank and British intelligence agencies. It is non-profit, has a weekly print newspaper which is published in 5 states in Brazil and has 636,000 Facebook followers. It also regularly produces news in English, and is starting a TV news program in English in partnership with Ghana’s Pan African TV.

During the week that former President Lula was imprisoned in what has now been revealed, by the Intercept, to be a kangaroo court process deliberately enacted to remove him from the presidential elections and open the door for Bolsonaro, the Guardian ran an article which attempted to normalize it by presenting false information that his conviction was connected to “a BR$88m graft scheme to help the construction company OAS secure contracts with the state oil firm, Petrobras”. That week, Brasil de Fato ran an article entitled, “Media portrayal of Lula’s imprisonment has the goal of manipulating public opinion.”

Revista Fórum was founded 2001, out of a journalists’ collective that formed to provide coverage of the first World Social Forum. Printed as a monthly magazine until going fully electronic in 2014, its editorial board includes UNE (the National University Students Union), The CUT labor union confederation and the Paulo Freire Institute, along with economists Marcio Pochmann and Paul Singer. With 773,000 Facebook followers, its articles regularly circulate more than those by the mainstream media outlets that are typically paraphrased by lazy foreign correspondents.

In 2016, Alex Cuadros worked to normalize the Coup in the New York Times, by accusing people who used that term to refer to the illegitimate impeachment of Dilma Rousseff (operationalized through buying votes in Congress, over a non-impeachable offense involving no personal enrichment which was legalized two days after she left office) of “oversimplifying the matter”.

That year, Fórum presented factual information proving that it was a coup and analysis on what it meant for the Brazil’s future, such as the following article by internationally renowned liberation theologian and author, Leonardo Boff, entitled “2016 was the year in which they tried to kill the hopes of the Brazilian people”.

Rede Brasil Atual and TVT are open-air TV and Radio channels with a connected written news site which were created and are maintained by the ABC metalworkers union in São Bernardo de Campo, and supported by the São Paulo Bank Tellers Union and the CUT labor union confederation. With signals emanating from São Bernardo, Mogi das Cruzes and Santos, their programming reaches a potential daily audience of 25 million people. Rede Brasil Atual was born out of labor union radio stations in greater São Paulo in 2004, and TVT television station opened in 2010. Rede Brasil Atual’s written news medium does not have as large a circulation as the previous two mentioned (with around 140,000 FB followers), but its articles, produced by union journalists, are regularly adapted or rerun in larger circulation publications like Brasil 247. TVT’s nightly news program, Seu Jornal (Your News), which presents National and World news from the perspective of the working class, is one of my favorite TV news shows of all times. 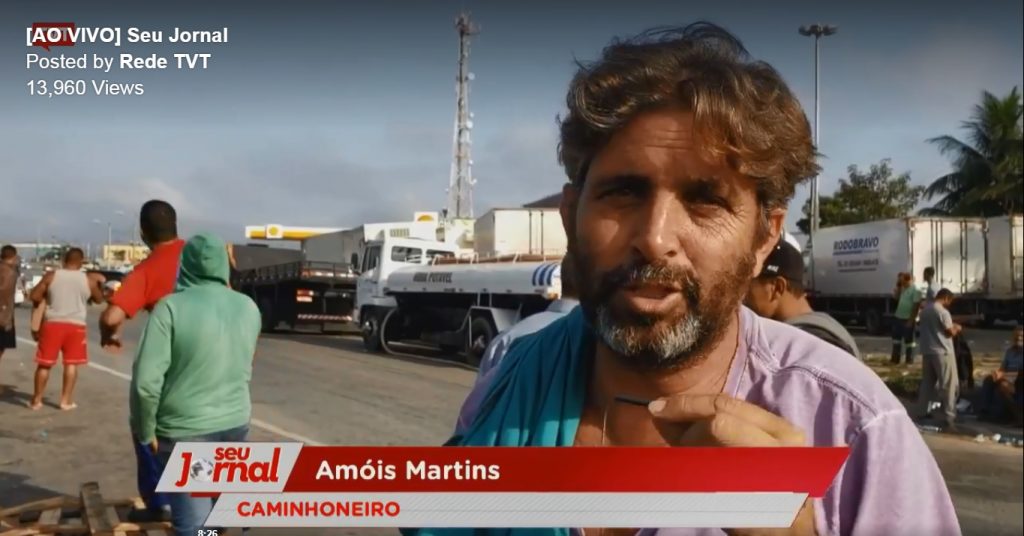 TVT on the ground during the 2018 national truckers’ strike

While northern journalists who had normalized Lula’s arrest were wringing their hands and feigning sadness, TVT broadcast his two day standoff at the ABC metalworkers union in real time. There, surrounded by friends like Manuela D’Ávila, Celso Amorim, Dilma Rousseff and Guilherme Boulos, he gave his historic speech to tens of thousands of supporters before turning himself in. Thanks to TVT, we have a video recording of “they can kill a flower but they will never be able to stop the arrival of Spring,” used as the climax of the award wining documentary The Edge of Democracy. When Globo ran some of this footage without permission on its nightly news program, TVT sued it.

Jornalistas Livres. As it became obvious that a right wing Coup was in the making against the Dilma Rousseff Government, both pro and anti-impeachment protests began to build momentum. Created in March, 2015 to counter biased media coverage of the huge anti-coup protests underway and recuperate a “commitment to the highest standards of journalistic ethics, which have disappeared from corporate media”, Jornalistas Livres rapidly developed into a decentralized, horizontal national network of volunteer journalists who go out with any equipment they have to film crowd sizes and interview people during protests. It also publishes daily articles from across the country to answer the need to “confront the escalating narrative of hate, anti-democracy and the permanent disrespect for human and social rights, which is largely supported by the traditional media.” According to its mission statement:

“Jornalistas Livres opposes the strategies of the traditional, multinational journalism industry, which is anti-democratic by nature, despises the spirit of journalism in favor of poorly-masked business, ideological, commercial, private, corporate and corporative interests… Jornalistas Livres abhors hierarchy, authoritarianism and the patriarchy.”

In its four years of existence Jornalistas Livres has developed a huge audience with over 1 million Facebook followers and hundreds of thousands of readers who do not access the site through the social media.

In 2015 Jornalistas Livres, like Brasil Wire, was already correctly warning its readers that a right wing coup was underway.

The following is a list of honorable mentions. These are some more of the popular, progressive media outlets which Brasil Wire turns to for reliable information to triangulate with the commercial mainstream media:

Diário do Centro do Mundo