During the 1970s, as Brazil suffered under a U.S.-supported neofascist military dictatorship, liberation theology factions within the Catholic Church created political organizing groups, called ecclesiastic base communities, in poor villages and slums. Using methodological tools developed by philosophers such as Paulo Freire, and influenced by Marxism, the priests and nuns began to develop local leaders and organize exchanges among them at the local, regional and national level. There were other factors at work, but the role that liberation theologians played, from the final years of the dictatorship until their censure by the Church hierarchy in the late 1980s and early 1990s, was fundamental in the formation of the popular (or “poor people’s”) social movements. These movements played an important part in creating one of world’s most progressive constitutions, as well as in the formation of the PT (Workers Party), and the elections and re-elections of Lula Inacio da Silva and Dilma Rousseff. 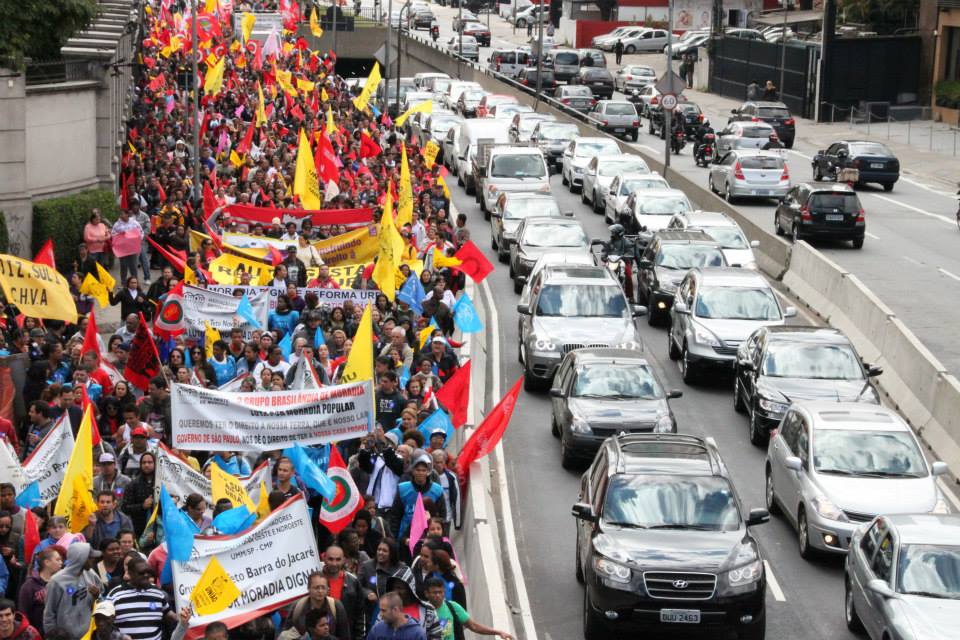 Photo courtesy of the UNMP-São Paulo.

The Movimento dos Trabalhadores Sem Terra, or MST (commonly called the Landless Peasants’ Movement, or Landless Workers’ Movement), was created in 1984 to address historic inequalities in rural areas (caused by 500 years of monoculture) by fighting for agrarian reform, collectively squatting on and farming on unproductive land under the slogan “Occupy, Resist, Produce.” Due mainly to its efforts, this practice is considered legal under the 1988 Constitution (although the Constitution is frequently ignored by local governments and the judiciary in Brazil) and is now regulated, supported and protected by a government agency called the Instituto Nacional de Colonização e Reforma Agrária.

Over the first 16 years of its existence, the MST established small farms for 250,000 of its affiliated families. During the Lula presidency, the MST began to shift its focus, slowing the number of land occupations and consolidating democratic, community control over its hundreds of villages spread across 23 states. Lula increased educational funding for agrarian-reform village residents by over 500 percent, with funding for adult literacy (using a highly effective Cuban methodology) and teacher training programs made in partnership with public universities so that they could staff, manage and develop curriculums for the public schools built in their villages. There are currently thousands of MST members studying at public universities, with many producing high-quality research on the MST and agrarian reform, and many local schools in MST villages staffed entirely by movement members.

Over the past 15 years, the MST strengthened its relationship with the Via Campesina International Peasants’ Movement, engaging in political organizing work in countries around the developing world and coordinating large protests against mining and agribusiness multinationals like Vale and Cargill.  In 2004, over 1,000 MST members built a political organizing school with degree-granting capability called the Escola Florestan Fernandes[PDF]. The school has a working organic farm, where young poor people from around the developing world come on exchange visits to work and study, and receives financial and technical support from the Brazilian government, which supports joint projects with public universities around the country.

Despite the frequent mischaracterization of one of its national leaders, João Pedro Stedile, as the MST’s director in the conservative media, the MST does not have a single leader, but operates according to a democratic structure in which pairs of male and female representatives, chosen at the family cluster, village, regional and state levels, serve two-year terms and can be removed from above or below any time their work is not deemed satisfactory, with the 23 pairs of state-level representatives serving as national directors.

The MST also has close relations with the Central Única dos Trabalhadores (CUT) labor union federation, and the governments of Cuba, Venezuela and Bolivia, among others, and has adopted a policy of critical engagement with the PT. The MST generally supports the PT in elections, as in most recently the re-election of Dilma Rousseff, but protests against various elements of government policy that it disagrees with, especially government support for agribusiness, which has grown particularly egregious under Rousseff’s second administration.

The União Nacional por Moradia Popular (UNMP, the National Union for Popular Housing) was formed by ecclesiastical base community leaders from Paraná, São Paulo and Minas Gerais states during the national mobilization for people’s amendments to the 1988 Constitution, and currently operates in 19 states. Essentially, it is a federation of dozens of urban housing movements, with some 200,000 members from around the country. The members of the UNMP employ two strategies to achieve their goal of guaranteeing the constitutional right to dignified housing and endorsement of the social function of property. The first strategy is to occupy abandoned buildings in the downtown areas of major cities, resisting eviction and pressuring local governments to rehabilitate the buildings and convert them into public housing. The second strategy is to occupy unproductive, vacant land on urban peripheries and build autonomous, self-managed housing cooperatives.

President Lula incorporated funding for social movements to build such cooperatives on unproductive land into his national development strategy, through the R$2.3 billion National Social Interest Housing Fund, which was then expanded and incorporated into the R$216 billion national housing program, Minha Casa Minha Vida [PDF], which, in addition to funding construction of millions of housing units for the middle class,  subsidizes social movements’ autonomous construction of around 20,000 housing units per year. According to program guidelines, the deeds to these properties are automatically registered in the name of the woman of the household, and the results to date have mainly been condominium complexes located on the urban peripheries.

The UNMP has historic ties with the PT.  Although, in my opinion, it has a less critical posture with regard to the PT than the MST, the UNMP also engages in protests against the federal government, often pressuring for more funding for autonomous housing construction, and for the prioritizing of projects closer to downtown areas. Last month, it joined the MST, other social movements like the Movimento Nacional de Luta pela Moradia and the Homeless Workers’ Movement (MTST), and the CUT and Central dos Trabalhadores e Trabalhadoras do Brasil labor union federations, in protests against a congressional bill that would greatly increase companies’ ability to outsource, and against the austerity measures proposed by Dilma Rousseff’s new, neoliberal finance minister, Joaquim Levy. The protesters were attacked by police in front of the Federal Congress building and several were hospitalized.

When some middle-class intellectuals make valid criticisms of the PT from the left – and there is plenty to complain about – they occasionally accuse the PT of co-opting social movements. I view this as a gross oversimplification that shows a lack of respect for the base members’ agency and a misunderstanding of the democratic processes by which these movements self-govern. I’ve worked with social movement leadership and rank and file for the past decade in Brazil and see no signs of individual co-optation. The national leaders of the MST receive a living stipend from the movement, equivalent to one minimum salary. The national leadership of the UNMP live in their own public housing along with other movement members. If a social movement receives some of what it has been fighting for and supports a government in an election as a result, has it been co-opted or is it merely voting in its best interests? Although both the MST and the UNMP support socialism, all favor construction of Gramscian counterhegemony over armed revolt as a strategy for achieving this. I believe that the reason they still support the PT is because, although they value the moral criticism raised by further-left parties such as the PSOL (Socialism and Freedom Party) and PSTU (United Socialist Workers’ Party), they don’t see them as capable of gaining electoral power.

On the other hand, how does the movements’ public support for a political party that has been in power for 13 years and been involved in a series of corruption scandals, affect the ability to mobilize naturally rebellious young people in the movements?  Membership in the social movement leadership and rank and file is aging and with the surge of evangelical Christianity among the poor, the weakened ecclesiastical base communities are no longer capable of introducing large numbers of young people into the movements.  One of the biggest challenges that the MST and UNMP face is how to mobilize youth in the struggle for agrarian and urban reform. In the current shifting political climate, it will be interesting to see if and how they meet this challenge.

Original version of this article published at CEPR.