Lula is appealing the conviction and 12-year jail sentence. Despite his imprisonment, he is seeking the presidency as a leader of the Workers Party, and he is the front runner. During President Lula’s two terms, Brazil’s economy soared, lifting 40 million out of poverty, as he focused on the needs of the poor and working people.

“The situation in Brazil right now reflects what can happen when you have people in positions of power intent on oppressing any movement to improve workers’ lives,” USW International Vice President Fred Redmond said.

The AFL-CIO, the United Steelworkers (USW), the United Automobile, Aerospace and Agricultural Implement Workers of America (UAW), the United Food and Commercial Workers Union (UFCW), the Retail, Wholesale and Department Store Union (RWSDU) and the Defend Democracy in Brazil Committee will demonstrate against the Brazilian-American Chamber of Commerce naming Judge Sérgio Moro as one of its two “Men of the Year” and celebrating him at an event at the American Museum of Natural History in New York City.

In its own words The Person of the Year Awards Dinner, which has been organized annually by the Brazilian-American Chamber of Commerce, Inc. since 1970, “honors two outstanding leaders (one Brazilian and one American) who have been particularly instrumental in forging closer ties between the two nations. Each year over 800 leaders from the international business, financial, and diplomatic communities convene in New York City at this traditional gala to pay tribute to the honorees.”

Inside the reportedly $29,000 a head event, Moro and his Wife Roseangela Wolff, a PSDB lawyer, posed for photos with Bia and João Doria, PSDB’s former Sao Paulo Mayor and candidate for State Governor. Moro has long stood accused of favouring PSDB, and despite a host of their high profile figures implicated in Lava Jato, there have been no prosecutions. 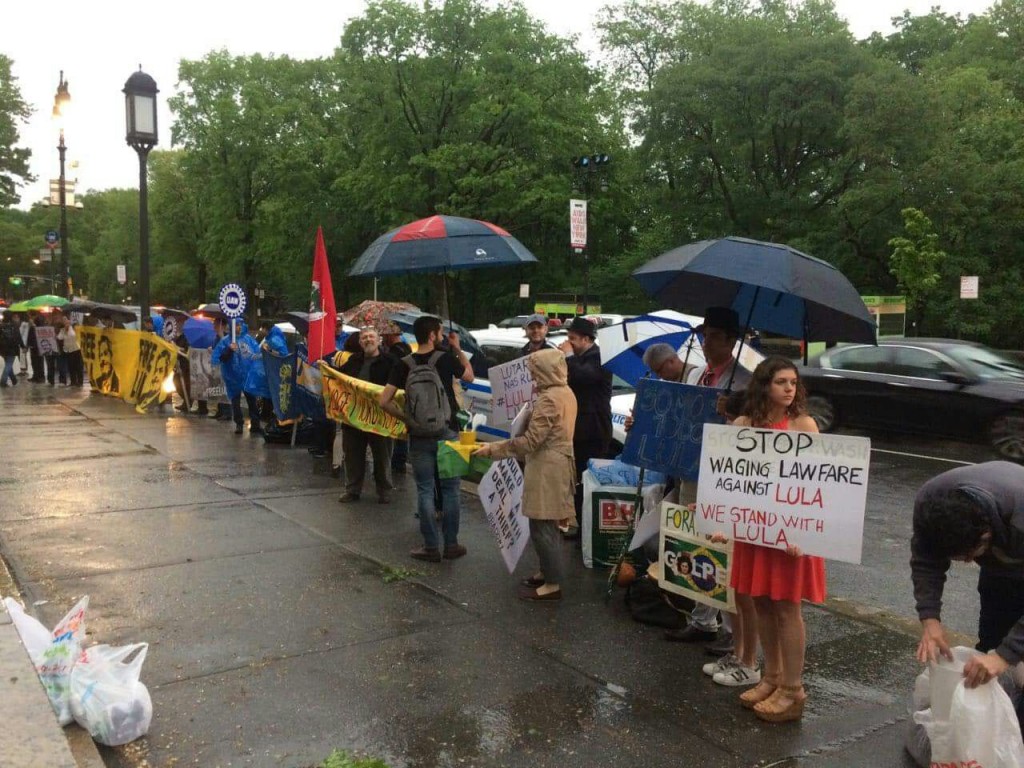 As president, Lula strongly supported worker’s rights, as did his successor, Dilma Rousseff, also a member of the Workers’ Party. Early in his career, Lula was a president of Brazil’s Metalworkers Union of the ABC region and he has the support of Brazil’s counterpart to the AFL-CIO, the Unified Workers’ Central known as the CUT.

Rousseff was impeached on questionable charges in 2016, and vice president Michel Temer, a member of Brazil’s elite and a deeply unpopular figure, took over in a legislative coup. After that, Judge Moro investigated, prosecuted, adjudicated, convicted and sentenced Lula on meritless charges involving unproven bribes.

“Moro was pursuing regime change in Brazil, not justice,” Redmond said. The lengthy sentence Moro imposed on Lula was a politically motivated attempt to disqualify him as a candidate for president in the fall elections. Temer, whose support is in the single digits, overhauled labor laws to weaken unions and spent much of the past year fending off criminal charges of corruption and obstruction of justice.

Lula’s supporters want his conviction overturned and hundreds have established a permanent encampment outside the Federal Police jail in Curitiba, Paraná, Brazil, since the popular former president was placed in solitary confinement there on April 7.