A group of Brazilian academics based in Sweden debunk media and governmental claims that the 2019 Amazonian fires are a “normal” seasonal event.

Brazil is currently facing worldwide attention due the fires in the Amazon rainforest. After an extremely polarized 2018’s electoral race which culminates in election of Jair Bolsonaro, Brazilian society is deeply divided between its critics and supporters. In this scenario, any event or news that possibly may affect Bolsonaro politically, is relativized and normalized by his supporters, aiming to minimize or neutralize criticism.

However, given Amazon rainforest’s global importance, should we be worried? Are the fires in the Amazon forest an exceptional event or are they a natural occurrence that are being used to attack Bolsonaro’s government, as many of his supporters argue?

An unbiased view supported by data from satellites clearly shows that fires in the Amazon rainforest have increased compared to last year’s monitoring and that the extent of the fires is much higher, when compared to equivalent periods in previous years.The fires in Amazon are directly linked to deforestation and the Brazilian National Institute of Space Research (INPE), which monitors deforestation and forest fires using satellites, released data showing an increase in deforestation of 90.7 June this year, and 277.9% for July, when compared to the same periods in 2018. 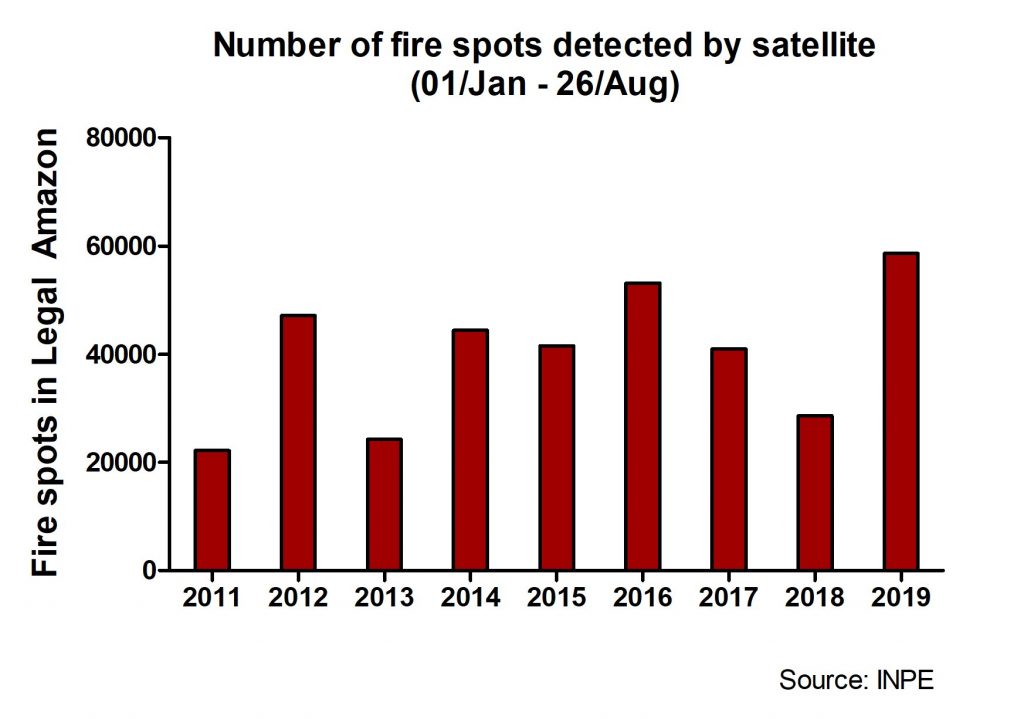 Fig. 1: Temporal analysis of fire spots in Brazilian Amazon. The numbers for 2019 are 104% higher than the same period of 2018, and is about 34% higher than the average for the first eight months of each year, since 2010.

These alarming numbers should give strong reasons for Brazilian government to take actions in order to prevent the expansion of fires and consequent deforestation. However president Bolsonaro has publicly discredited the accuracy of INPE’s reports and promptly fired the director of the Institute last July, physicist Ricardo Galvão, a renowned scientist with a strong international reputation. Data produced by INPE is widely used by several Brazilian institutions such as IBAMA, IBCBio and other regulatory agencies as well as NGOs that depend on this information to carry-out their work on the ground. Moreover, data about monitoring Amazon are freely available at INPE’s webpage, which means that anyone around the world is assess the extent of deforestation in real time. Bolsonaro’s attitude denying the accuracy of data from Brazilian governmental agencies followed by the dismissal of INPE’s director shocked the whole academic community in Brazil.

It is one of several instances this year when the government has systematically accused academic community of ideological manipulation in order to garner public support for the deregulation of environmental governance.The discussions about these events were at the time of Dr. Galvão’s ousting mostly restricted to academic circles , with not much appeal to public opinion. However, when the smoke from the fires in the Amazon traveled south about 2,790 km and reached the largest city in Brazil, São Paulo, transforming a sunny afternoon into a dark evening at 3 pm, people began to get a better idea about the severity of situation of fires in the Amazon rainforest (Fig. 2). 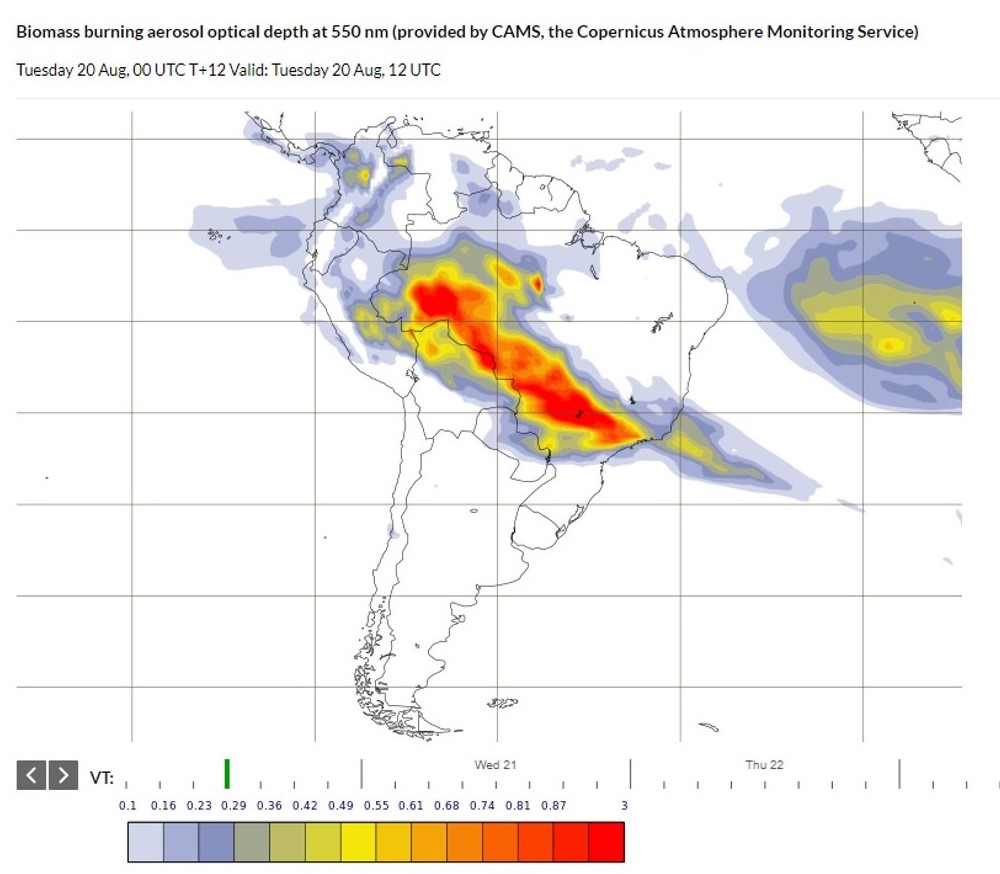 Fig. 2: Satellite image showing aerosol dispersion in South America: The heatmap shown biomass aerosol transportation in the air (red) from Amazon area towards southeast in Brazil. As a consequence, around 3:00 p.m. the sky suddenly blackened, and day became night in São Paulo.

This is the equivalent distance between Stockholm and Crete, in Greece. While darkness at 3 pm may sound quite normal in winter time in Sweden, it is something unthinkable in a tropical country like Brazil. Swedes from an older generation may well remember the acid rains that travelled from Chernobyl towards Scandinavia in the 1980s.

As an immediate consequence, data about the fires produced by government agencies was placed at the core of passionate debates in Brazil, mainly due seasonal nature of fire events, which in our opinion aims to both normalize or relativize the scenario.Such news reporting buys into Bolsonaro’s argument that allegedly seasonal fires are being used to negatively affect his government, thus shifting the focus of the debate from the gravity of fires and its consequences to nature and human health.

However, scientific data from satellites does not support this hypothesis. In addition, the gravity of such fire events in the Amazon rainforest has been confirmed by other international aerospace agencies, including NASA (1).

Later, we learned that the fires were caused by a coordinated action by illegal loggers and farmers called the “Fire Day” on August 10th. This group, organized through the messaging app Whatsapp, had warned the government about their intention to set fire to the forest. They were motivated by the President’s statements supporting the deforestation of Amazon to promote the economic development of the region.

The Amazon rainforest contains about 40% of the world’s remaining tropical rainforest, covering 5.5 million km2, corresponding to 61% of the area of Brazil, stretching over to neighboring countries of Bolivia, Peru, Colombia, Venezuela, Guyana, Suriname and French Guyana. It is the largest and most species-rich biome of the planet. The continental expanse of the Amazon basin is about 22% larger than the entire European Union.

Thus, it is not very difficult to understand that this region plays a vital role in maintaining biodiversity, climate equilibrium, terrestrial and underground carbon storage. Adding even more complexity to scenario, biomass burning emits significant quantities of known pollutants hazardous to health, including several compounds able to induce DNA damage and genetic mutations. These mutations accumulated over the years may generate cancer.

Several studies conducted by Brazilian scientists indicate that the population is potentially exposed to an increased risk for lung cancer and other diseases (2-5). Depending on the intensity and frequency of exposure to biomass of burning pollutants, cardiovascular and pulmonary diseases, premature mortality, and adverse birth outcomes, may occur. (6)

While it is early to evaluate if fires in Amazon will continue over the next months, the lack of practical actions by Bolsonaro’s government and its disregard for scientific evidence are enough to set off the alarms about the future of the Amazon.