Benedito Barbosa, founding member of the UNMP and São Paulo CMP directorate member, wrote the following communication about the Brazilian political conjuncture and the demands of the social movements.

National March for Urban Reform and the Right to the City camps in Brasilia to denounce cuts of over R$1.2 Billion to sanitation, land regularization and housing, and to demand freedom for Lula!

Homeless movements from across the country organized within the UNMP, CMP, MLB, MTD, MNLM and CONAM and peoples and community movements, left in bus caravans and traveled hundreds of kilometers to Brasilia, which is still shaken from the truckers strike that stopped our already struggling economy, damaged by the enormous political and social crisis since 2016 when the political, legal and mediatic coup removed Dilma Rousseff from power after she was legitimately elected by over 52 million Brazilians.

Deepening the coup that is underway, a judge from Curitiba, under the baton of the putchcist media, imprisoned ex-President Lula two months ago, with the clear goal of removing him from this year’s presidential elections. Lula still leads in all voter polls and will run for President of Brazil anyway.

There are over 13 million unemployed workers unemployed in our country at the moment and this coup government of Michel Temer’s, associated with a neoliberal agenda, has driven the country to chaos and, in the interests of the markets, cut social programs, approved a constitutional amendment that will freeze spending on public health, housing and education for 20 years, enacted labor law reforms against the interests of the workers and is trying, by all means possible, to privatize the public banks, petroleum end energy sectors.

This illegitimate government ended the Self-Managed People’s Housing program, which allocated resources for housing cooperatives and associations in the city and the countryside, and we have seen a full out attack against urban and rural land and building occupations and an increase in urban and rural land conflicts with hundred of forced and violent mass evictions, deaths and an intense process of criminalization of social movement leaders

Further deepening the barbarism in which we live in our cities, in order to meet demands to lower fuel prices, this government has transferred the costs of its incompetence to the poorest of the poor, lowering even further the funds for public housing, health and eduction.

Therefore, there is no other alternative for the homeless than to fight, fight and fight for our rights.

The people’s social movements are in war against this coup government and, from June 5-7, will march for the right to the city and freedom for Lula in Brasilia.
Our demands are: Out with Temer and Freedom for Lula!  Elections without Lula are Fraud! 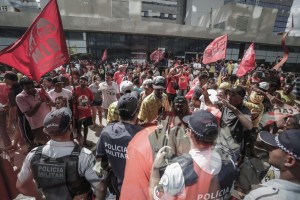 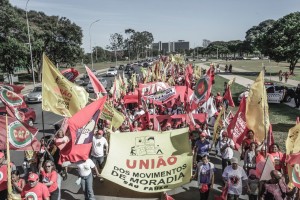