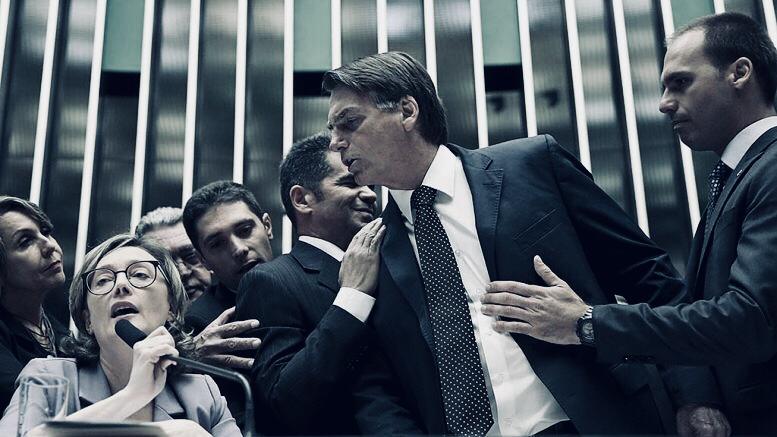 Not even a year has passed since he became president of the Republic, and already Jair Bolsonaro has amassed a collection of sexist, machista, and prejudiced statements. Members of his administration claim than he is simply “trying to share his good mood,” but the jokes embarrass aides, legislators, and people close to Bolsonaro.

Some of his cabinet members have argued that the jokes, many of which are of dubious taste, are simply part of Bolsonaro’s nature. They justify the statements, including the ones of a sexual nature, as part of the president’s “authentic style.”

Minister of Justice Sérgio Moro, known for his discretion, was embarrassed last week during a broadcast on one of Bolsonaro’s social media accounts. The president asked him, with a sexual connotation, whether he would “flip positions” with Minister of the Environment Ricardo Salles. Moro was visibly uncomfortable.

Amidst a series of controversial remarks, Congresso em Foco has gathered some of Bolsonaro’s statements that have disrespected and embarrassed people. Take a look:

“Are you going to flip positions with Salles?”

“I cannot accept that public funds be used to make films like Bruna Surfistinha. No way.”

In July, Bolsonaro criticized the National Film Agency (Ancine), the agency that regulates audiovisual production, for funding Bruna Surfistinha, a film telling the life story of a famous prostitute.

“Everything little down there?”

In May, Bolsonaro played a joke on an Asian man in the Manaus airport, in the state of Amazonas. The president asked the young man the size of his penis.

“If it’s a Japanese reform, he’ll be gone, right? I’ve already said this. Itty-bitty. Over there in Japan, everything is miniaturized.”

Also in May, Bolsonaro dropped this pearl of wisdom when asked about statements from Minister of the Economy Paulo Guedes, who promised to resign if a key pension reform bill did not go far enough.

“If you want to come here to have sex with women, make yourself at home.”

In April, Bolsonaro stated that Brazil could not be a gay tourism destination. While speaking about Brazil’s image abroad, Bolsonaro endorsed sexual tourism. Several Brazilian states reacted by launching campaigns against sexual exploitation.

“Here is the alarming thing, when we talk about hygiene: in Brazil, we still have 1,000 penile amputations per year due to lack of water and soap.”

In April, Bolsonaro revealed his concern about what he considered an “alarming statistic” about penile amputations in Brazil due to lack of hygiene.

“Gays aren’t demigods. Most of them result from the use of drugs.”

In December 2014, Bolsonaro offended congresswoman Maria do Rosário (PT – Rio Grande do Sul), and was later ordered to pay damages. Prior to this, in 2003, Bolsonaro had already addressed her, in a speech in the Chamber of Deputies: “I said that I wouldn’t rape you, because you don’t deserve it.”

“I feel sorry for business owners in Brazil, because it sucks to be a boss in this country with so many labor rights. [When choosing] between a man and a young woman [for a job], what will the business owner think? ‘This woman has a ring on her finger, soon she’ll be pregnant, and then she’ll get six months of maternity leave…’”

In December 2014, in an interview with Zero Hora.

“Everybody chased after hens in the coop in my town. Some of the worst rascals would go for the heifer or mares. It was normal. There weren’t as many women as there are today.”

In 2012, during an interview with the now-defunct TV program CQC, Bolsonaro admitted to having practiced bestiality, that is, sexual acts with animals. In the same interview, he stated that he had hit a woman. “I was a young man back in [my hometown of] Eldorado. A girl went too far with me, and…”

“I would be incapable of loving a homosexual son. I am not going to give a hypocritical answer here: I would rather that my son die in an accident that to show up around here with some dude with a mustache. For me, it would be like he really had died.”

In June 2011, during an interview with Playboy. In 2017, he spoke about it with the magazine Veja.

“Look, Preta, I’m not going to discuss promiscuity with anybody. I don’t run this risk because my sons were raised very well and didn’t live in settings like where you unfortunately did.”

In March 2011, in response to the singer Preta Gil, who asked him what he would do if his son fell in love with a black woman. This year, the Court of Justice of Rio de Janeiro (TJ-RJ), ordered the president to pay US$ 40,000 in moral damages to the Justice Ministry’s Fund for the Defense of Assorted Rights (FDDD) as a result of the statement.

Bolsonaro son gave list of Brazilian anti-fascists to US Embassy

Lula: US suppression of Brazil’s sovereignty “is not a theory, it is a fact”

Bolsonaro son gave list of Brazilian anti-fascists to US Embassy

Lula: US suppression of Brazil’s sovereignty “is not a theory, it is a fact”