Although squatters are frequently treated as criminals in the national and international media, according to article 5 of the 1988 Brazilian Constitution, any citizen who does not own property has the right to occupy any abandoned tax-scofflaw building and pressure the government to convert it to ownership-based social housing. In São Paulo, a dozen buildings have already been converted to social housing and around 40 are currently occupied as residents patiently wait for their legal rights to be fulfilled. The Frente de Luta por Moradia, (Housing Struggle Front/FLM), was founded in 2003 and is the largest squatters movement in the city with 15 occupied buildings and 6000 residents. In addition to the social movements, many empty buildings in São Paulo are occupied by entrepreneurs, sometimes connected to organized crime, who charge low rents to the occupants and generally do not guarantee the same level of safety as the social movements. This was the case of the 26-story building that caught fire and collapsed on Paysandu Square in downtown São Paulo in the early morning of May 1st, which appears to have killed at least 37 people. The FLM occupies another building on the same square. Although it was hit by the fire, it didn’t spread, due to different safety conditions inside the building. Osmar Silva Borges is one of the directors of the FLM, and on May 3, I spoke to him about the fire and its repercussions for the social movements.

Despite the fact that the government is legally required to guarantee the safety of squatters in Brazil, The media is currently blaming the occupants and the social movements for the Paysandu fire. Why are they blaming the victims?

It’s true that the media is trying to blame the occupants of the former Federal Police building that caught fire and collapsed. We are following this whole media attack. Even though there were some illicit activities in the building that we do not support – and these things happen – the vast majority of people there did not have anywhere else to live. Unfortunately every time a tragedy like this happens in São Paulo it seems like the main communications companies in this country move to protect the people who occupy positions in government from being criticized for neglecting their duties to support the families. It is regrettable that, in such a difficult moment of a tragedy such as this one, the press plays this sensationalistic role of attacking and criminalizing the social movements.

This building had a facade of being occupied by a social movement, but we perceived that the people who identified as its directors were not worried about the physical conditions and the security of the families who lived there and failed to offer a minimum quality of life for the residents. It is clear that there was negligence by the government too. The government should have resolved this problem. It was a tragedy foretold by the poor conditions that the people were living in. So we know that there was negligence by the people who were managing the building and negligence by the government. The difference between an occupation like this one and an occupation by the FLM is that when we identify a building that is vacant, we come in and we work with the families to revitalize the building so that it has the minimum necessary conditions  for the people to live well while they are there. In other words, we take care of the space we are living in. The people join together in a group to clear out all of the debris, clean and paint it, properly lay the electrical wiring, organize the water supply and sewage disposal. So the difference is that we organize internally and transform the building into a decent place to live even if it just provisional, as they wait for their right to housing to be guaranteed by the State. 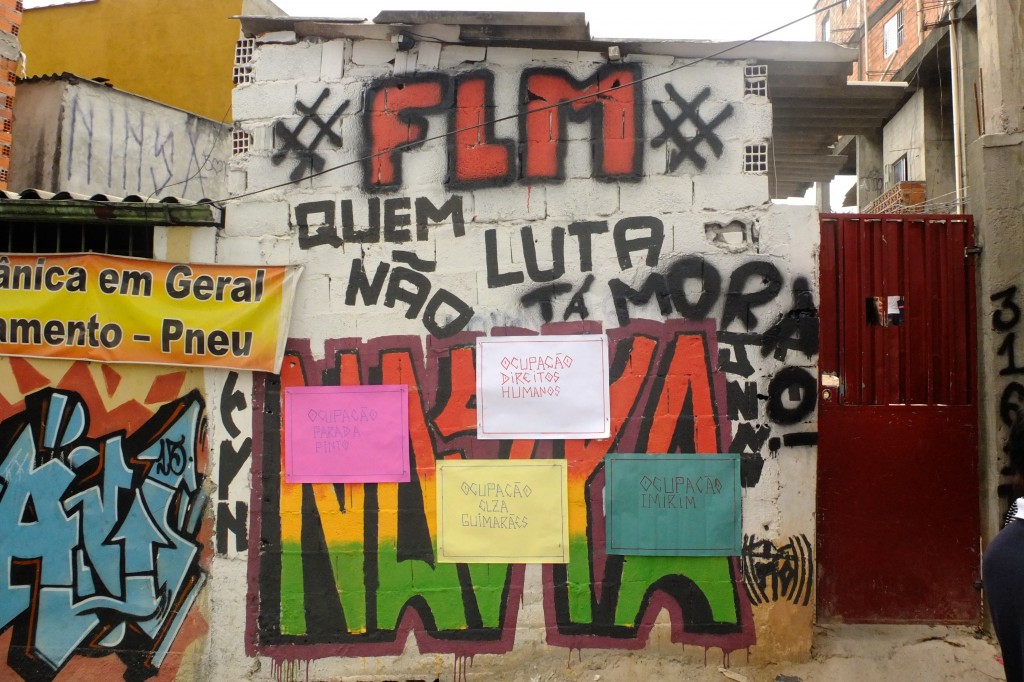 Do you think that the government is using this tragedy to criminalize social movements in the Downtown area of São Paulo? Why?

I believe that the government has a certain responsibility for this tragedy and I think they are trying to avoid being blamed for it. They are trying to deflect the responsibility onto the people who needed their support. I think that the role that  President Michel Temer, Governor Marcio França and Mayor Bruno Covas are playing at the moment is ridiculous. President Temer said that they didn’t relocate the residents from the building because they are poor. But there are government programs, like Minha Casa Minha Vida that could have been used to relocate them to dignified housing if Temer hadn’t paralyzed them on the national level. So there is this national crisis that we are going through in Brazil caused by a reduction in the public housing budget. Since the coup against President Dilma, the government  butchered Minha Casa Minha Vida, reducing housing construction from 100,000 units to 35,000 units a year.

What is going to happen to the families that were displaced by the fire?

Since the land that the collapsed building occupied belongs to the Federal Government, we are demanding that the space be used to build social housing in homage to the victims of the disaster and that it is used to house the families that are still camped on the sidewalk across the street from the wreckage. We have been negotiating with the government on behalf of the families to guarantee that they get a minimum level of support. We are negotiating to relocate them to a shelter until they begin receiving their social rent compensation, which is an initial payment of R$1200 to cover a security deposit and R$400/month which is what the government is offering to help them move off of the sidewalk. But we are negotiating so that the government does not treat rent subsidies as a permanent solution and they are eventually relocated into social housing.

What is the FLM Doing to prevent the government from using this tragedy as an excuse to perform mass evictions of the social movement occupied buildings in São Paulo?

We have been talking with the Municipal Housing and Public Security Secretaries to try to prevent a retaliation from the government and the judiciary in which they take this event and use it to target other occupied buildings for evictions. So we met with them yesterday to try to plan a collaborative action to  create some security procedures for all of the occupied buildings in the city.  Despite the fact that the FLM has been doing this all along through its fire prevention brigades, through it´s care in guaranteeing the integrity of the electrical wiring, the water systems and structural issues, we think its important to create procedures together with the government to better adapt the occupied buildings to legal standards. We are also negotiating with the utilities companies to see if there is a way that we can have electricity legally provided to the occupied buildings, to be paid for by the social movements on a provisional basis while they are there. So we have been talking about these things and I think we are moving forwards to guarantee that there is not terrorism practiced against the occupations by the government and the judiciary.