After the lowest turn out yet for a pro-impeachment protest last Sunday, hundreds of thousands of social movement and labour union members took to the streets wednesday 16/12 in at least 23 states to protest what they call a Coup attempt against President Dilma Rousseff.

In São Paulo, where Brasil Wire witnessed at least 5 blocks of the 6-lane Avenida Paulista completely clogged with protesters before the event officially started, the CUT labor union federation estimate that the crowd size was around 100,000, whereas other estimates ranged from the preposterously low 3000 cited by the PSDB State Government’s state military police (which they revised 24 hours later to “50,000”) to 55,000 by DataFolha polling agency and 75,000 by the national students’ union. The protest began to assemble between 4 & 6pm at MASP Museum of Modern Art, and continued to grow as attendees arrived after work and from outlying neighbourhoods, right up until its conclusion near Republica Square in the Centre at around 9:30, when participants slowly began to disperse.

In contrast last Sunday’s pro-impeachment protest, with bolstered numbers due to the thousands of cyclists and skateboarders who flock to closed-off Avenida Paulista every Sunday, drew 40,000 according to DataFolha but even lower numbers according to video and photographic evidence taken by people who were on the scene. Outside the pro-impeachment opposition heartland of Paulista & Copacabana, the demonstrations mustered even fewer.

(Previously we have discussed how rival demonstrations of right & left are for the most part treated very differently by national & international media.)

The 16/10 protest reunited social movements and union federations that have differing opinions about how much criticism President Dilma Rouseff deserves for her choice of neoliberal economist Joaquim Levy as finance minister and her funding rollbacks to some of the social programs that helped the government eliminate famine and move 26 million people above the poverty line during the first decade of PT presidencies.  As they moved from the MASP museum to Praça Republica, a process that took several hours due to the size of the crowd, they chanted, “There will not be a coup!”

In an article published in Rede Brasil Atual, leaders of the union federations and social movements that participated made the following comments:

Vagner Freitas, president of the CUT labor union federation which has a base of over 23 million workers,  referred to the impeachment attempt as a “Coup against the working class”.

Gilmar Mauro, from the MST or Landless Workers’ Movement, said, “it isn’t enough that Eduardo Cunha resigns, he has to be thrown in jail,” referring to fact that the lower house speaker who has led the impeachment attempt, is currently under investigation by the Swiss government over money laundering and bribery allegations.

According to Sonia Coelho from the World March of Women, “part of the hatred against Dilma Rouseff is because she is a woman. Aside from being criminals, Eduardo Cunha and his supporters are sexist, homophobic and misogynist.”

Adilson Araujo, president of the 700 union strong CTB labor federation said, “this corrupt cabal known as the PSDB party doesn’t have the right to say a thing, because they caused mass unemployment and sold off our national patrimony for the price of a banana.”

Thamires Silva, coordinator of CONEN (the National Black Organization´s Coalition), said that Afro-Brazilians, poor people, women and the GLT population were on the streets protesting against the coup across the country because, “the fascist right can’t accept that bricklayer’s kids are studying at university now and that there is a woman president.”

The coalition that organized the protests has a broad base of political alliances. Although the CUT has a long history of close ties to PT,  the CTB has historic ties to the PSB party which ran along with Aécio Neves in the last election.

What all of the groups have in common is a perception that the impeachment process currently underway in Brazil represents a Coup D’etat which will set back the advances in living standards and human rights that have taken place in Brazil during the past 13 years.

The success of yesterday’s protests compared to the rapidly diminishing strength of the opposition shows that the tide is turning against the impeachment process. This tendency can be seen in both the national and international media as some traditional conservative voices now openly oppose the impeachment.

The demonstrations were the crescendo to an eventful 48 hours, where the simultaneous suspension of mobile messaging platform Whatsapp by a Judge made the biggest headlines around the world (facing popular outcry the block was cancelled less than a day later). Meanwhile the properties of Congressional Speaker Eduardo Cunha were subject to unprecedented searches by Federal Police, and Supreme Court voted to over-rule his secret vote to initiate impeachment proceedings against Dilma Rousseff as unconstitutional – A victory neither for government, nor opposition, but for Brazil and its constitution. 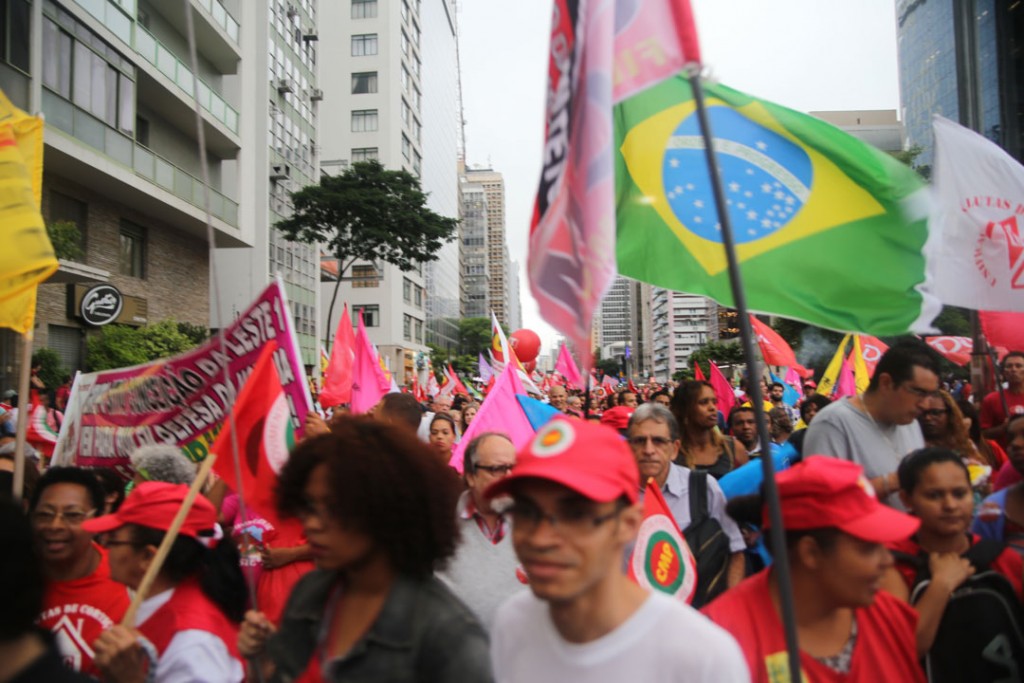