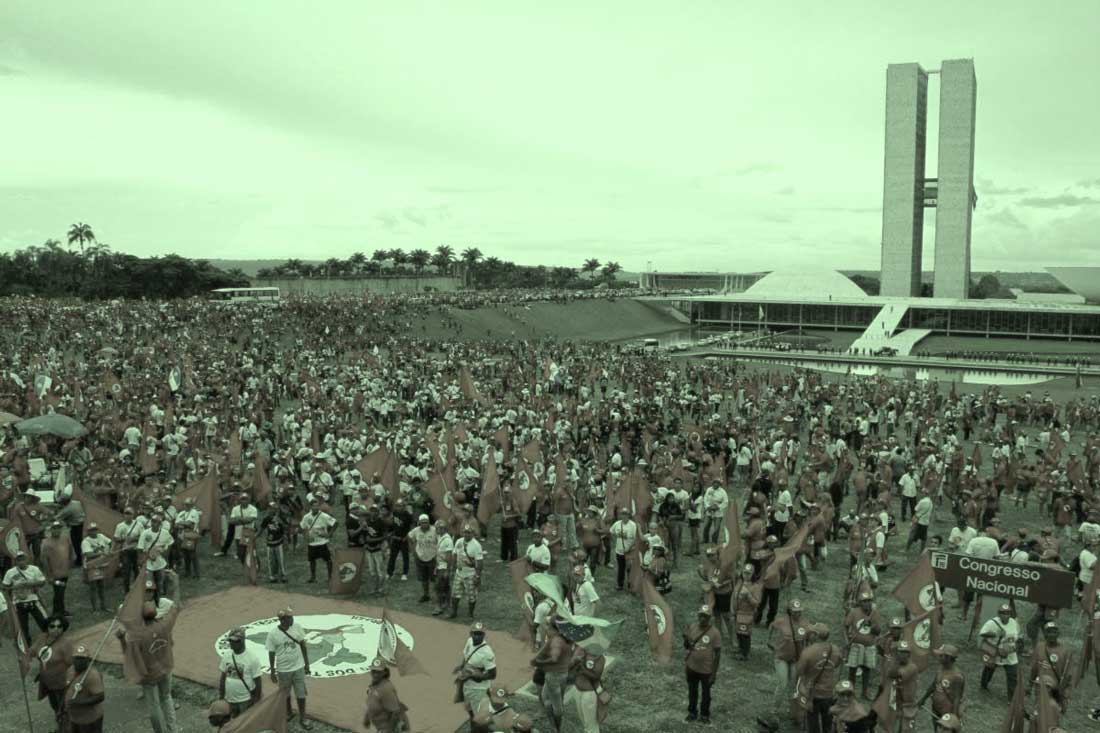 MST: “There won’t be a Coup without resistance.”

The Brazilian organized or “popular” left is made up of labour unions, poor people’s social  movements, women’s and Afro-Brasilian movements, religious base organizations and the political parties that they feel best represent them within the confines of a capitalist system. As the corrupt Brazilian media and the conservative  middle class, unhappy with last years election results and aligned with a conservative judiciary continue to selectively attack members of the government over generalized corruption problems that involve all political parties,  the organized left complaints about what it perceives as an attempted coup d’etat. The following public statement was created and signed by hundreds of intellectuals and activists as well as 30 social movements, union locals and federations and church organizations including the MST, the World Women’s March, Rural workers unions and the Catholic Church’s Pastoral Land Council (CPT).

Popular Social Movements Rise up Against the Coup

1. We don’t accept the breaking of democratic rule of law, no matter what the pretext.

2. The Brazilian people went to the ballot boxes and chose, for a mandate of 4 years, the president of the republic, 27 governors and the men and women that make up the federal congress and state legislatures. The people also chose 1/3 of the members of the Brasilian senate for their 8 year mandates.  Those who are not happy with the results of the elections or the mandates of the newly appointed cabinet members have the right to protest, act in opposition and use all available resources to support these actions within the limits of the law.  But we consider it unacceptable and therefore rise up against the constant repeated efforts by sectors of the opposition and the media oligopoly to create artificial pretexts for interrupting a legitimate democracy through illegal procedures.

3. The Brazilian people chose to maintain the presidential system in 1993. Since then, the relation between the President of the Republic and the National Congress has passed through several different phases but we have never seen what is happening today: an attempt on the part of the speaker of the house, with some support from the speaker of the senate to usurp presidential powers and impose a conservative agenda on the country that was not victorious in the 2014 elections.  We manifest against this  coalition that currently prevails in the National Congress, disposed to approve a conservative political reform that includes reducing the age of penal majority, violation of labor laws through approval of the Bill 4330 outsourcing law, changes in petroleum law (Lei da Partilha), among many other measures. We invite the Brazilian people to protest and pressure lawmakers so that they respect the will of the true majority, of democracy, human rights, workers rights, social rights, women’s rights, youth rights, Afro-Brasilian rights, GLT rights, indigenous rights, maroon community rights and the rights to well being, development and national sovereignty.

4. The Brazilian constitution of 1988 establishes a separation and equilibrium of power. The executive and legislative powers are regularly submitted to public scrutiny. But the judiciary has only recently  begun to experiment with still very timid forms of supervision, basically by its own members. And this supervision has shown what we have all known for a long time: corruption, nepotism, arbitrary decision making and the plague of high salaries that also affects  the Public Attorney’s Office.  The most grave of all is the disposition that sectors of the judiciary and the public attorney’s office are increasingly showing to substitute the role of other sectors of government, acting like the police and disrespecting the constitution.  We call on all democratic sectors to reaffirm the basic constitutional freedoms including the idea that nobody is considered guilty without a trial. Justice yes, vigilantism no!

5. The 1988 Brasilian Constitution prohibits communications monopolies. Despite this, the means of communications in Brasil are controlled by an oligopoly. We call on the democratic and peoples’ sectors of society to fight for the defense of a law for democratic media that can guarantee true freedom of expressions, communication and the press, against this small number of family businesses that corrupt and distort the truth on a daily basis in the service of business and political interests.

6. A consortium of conservative politicians, the media oligopoly, sectors of the judiciary and the police are working together to break the legal democracy. They are taking advantage of mistakes made by democratic and popular sectors of society, among those committed by the federal government. We, who sign this open letter, do not confuse things: we are on the front line in the fight for deep change in our country, for another political economy, against fiscal adjustments and corruption. And for this reason, we don’t accept any break with legality.

7. We conclude in expressing our total solidarity with the Greek people for sovereignty, democracy and well being, against the impositions of transnational financial capital.

In defense of the rights of the workers!

In defense of the social rights of the Brasilian People!

In defense of democracy!

In defense of national sovereignty!

In defense of people’s structural reforms!

In defense of Latin-American integration!