A CIA memorandum, prepared for then Director of Intelligence William Hedgcock Webster, and his Deputy, Robert Gates, summarised their discussion.

In the document, classified Top Secret, the range of topics include the “Noriega Problem” in Panama (United States Military would invade a year later on Dec 20 1989), Nicaragua/Honduras, Libya, USSR, Afghanistan, Iran, and Brazil – “The Economy and prospects for a Coup”, specifically should Leftist Leonel Brizola win the coming 1989 Presidential Election. The partially redacted document has one page in its Brazil section censored entirely, but talking points still visible in this 2012 declassified “sanitised” release include the worsening economic problems under the Sarney Government, namely the 900%+ inflation for 1988 alone. (Ed: remember this whenever you see 2015 described as “worst crisis ever”)

Elsewhere the memorandum explains how economic deterioration, combined with recent violence at a steelworkers strike (led by future President Lula) and the leftward turn in municipal elections, had “set off alarm bells in some military circles and among their allies in the business sector”.

It notes that “Senior  officers are involved with businessmen and bankers in contingency planning for possible military intervention.” and that “Key industrialists in São Paulo are sending signals –through ex-president General Geisel– to the high command that intervention is necessary. Geisel reportedly has firmly rejected the plea for now.”

The State Department officials remark that “even given the dire economic situation, we do not believe that military intervention is imminent.” and that while some officers would favour “decisive leadership” (euphemism for return to Military rule), most are “content to wield power behind the scenes while they wait to see how the next presidential sweepstakes plays out”. They conclude that “most officers could probably be convinced to intervene directly only if “social chaos” erupted and civil order broke down.”

It goes on to discuss the Presidential Elections of 1989, and the “threat” of a Leonel Brizola victory. Brizola was a rare case in Brazilian politics being one of the few prominent figures who were able to survive the U.S.-backed Military Coup & Dictatorship of 1964-1985 (during which he was also an advocate of armed resistance to it) and return to office after a 20 year ban on political activity. Much of that time he spent in exile, first in Uruguay, where he was eventually granted asylum by the U.S. Embassy in Montevideo, following the suspicious deaths of “Frente Ampla” politicians opposed to Military rule, former-presidents Juscelino Kubitschek, ’64 Coup deposed Joao Goulart and ‘Golpista’ turned Dictatorship-opponent, Carlos Lacerda, as the shadow of Operation Condor spread over the Southern Cone. ‘Cinema Novo‘ filmmaker Glauber Rocha, a former friend, remarked that Brizola’s rescue by the United States was “a demonstration of cultural colonisation”, in that out of gratitude, particularly to President Carter, he would no longer oppose U.S. imperialism explicitly as he had. (Various cables from the Kissinger/Carter era discussing Leonel Brizola can be found here).

Brizola had been a protege of former Dictator and later elected President Getulio Vargas, and was, along with Goulart, an heir to his developmentalist left tradition. On return from exile in 1979, and following the legalisation of political parties beyond the ruling ARENA and official opposition MDB (PMDB), he founded PDT (Democratic Labour Party) along with former political prisoner, and future President, Dilma Rousseff. Brizola would run first for Governor of the State of Rio de Janeiro, successfully, in 1982, despite attempted manipulation by former Military officials and TV Globo. Although controversial in many respects, he was equally pragmatist as developmentalist, and used his term to implement ambitious public education projects, such as the CIEP Education Centres, designed by Oscar Niemeyer. 500 of these revolutionary new public high schools were built, with all day (as opposed to the Brazilian standard 4 hour) school days (Rousseff pursued similar commitment to improving Brazil’s public education). He also pushed the formalisation of slum dwellings, providing them with infrastructure, sanitation and property rights. To the dismay of Brazil’s conservative elite, Leonel Brizola prepared a run for the Presidency in 1989, in what would be the first direct elections for almost three decades, which many had expected him to win.

He would however fall in the first round of voting, losing narrowly (amidst rumours of fraud) to the Worker’s Party candidate Luiz Inacio Lula da Silva, who advanced to the runoff against TV Globo-promoted neoliberal, Fernando Collor. Following his own defeat, Brizola gave PDT’s full support to Lula’s candidacy, only for the Trade Union leader, and bête noire of Brazil’s oligarchic media, to lose by 47%-53%. On the eve of the election, a false accusation was spread that the Workers Party militants were behind the kidnapping of businessman Abílio Diniz. Due to election campaign rules, Lula was unable to respond to the allegation prior to the vote.

in 1992, Collor, facing probable impeachment, would go on to resign, and be banned from politics for eight years following a corruption scandal, amidst the economic shocks of his “Plan Collor” liberalisation programme. He was later acquitted of criminal charges only for more to emerge.

Many Brazilians, particularly on the left, still ask “What would’ve happened if Brizola had won in 1989?”. The concern expressed in the CIA document gives us an indication if not a definite answer. Concern amongst business, bankers, and apparent U.S. support for a hypothetical Coup suggests that Brizola would not have been allowed to govern unimpeded. 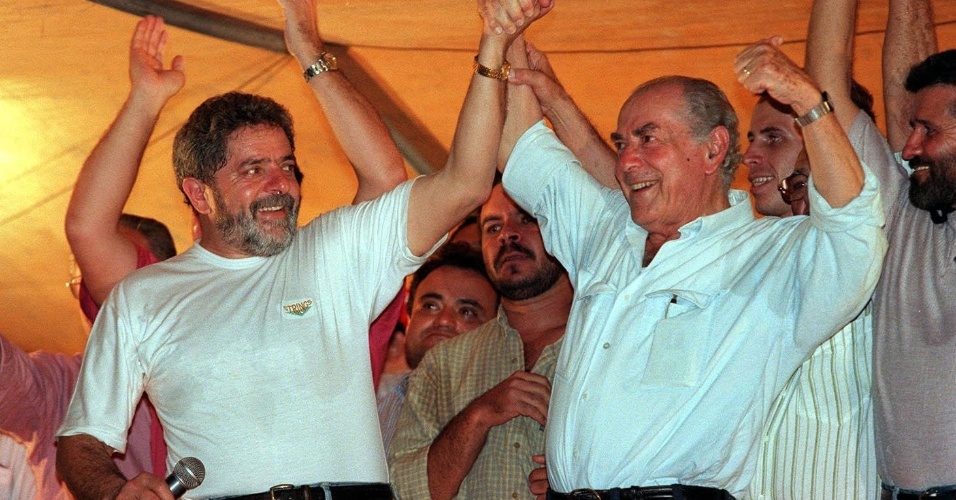 On the campaign trail as Lula’s running mate for the 1998 election.

This concern, particularly amongst investors and the financial sector was mirrored in 2001/2 when, following two further election defeats (one of which with Leonel Brizola as running mate), Lula was in the ascendency. Lula, who like Brizola was not doctrinaire, made concessions to the markets and Brazilian elites which enabled him to implement a Social Democratic programme during his 2003-2011 Presidency. These compromises would come to haunt him, his Workers Party, and his Presidential successor, the one-time Brizola Protege, Dilma Rousseff, who having switched parties from PDT to PT in 2000, became Lula’s first Minister of Energy & Mines from 2003-05, and his Chief of Staff from 2005-10. Despite conservative claims, that period was the strongest and most stable period of for Brazil’s economy for decades, yet as Lula prepares a run for the 2018 elections (in the face of quasi-legal persecution), the same “investor concerns” are back.

Rousseff’s announcement to run for the Presidency in 2010 was met with yet similar concern, and then Secretary of State Hillary Clinton took great interest. In this State Department cable, São Paulo’s political and business leaders express their worries about the “Radicalisation of the Workers Party”, particularly in Foreign Policy. Present is Rousseff’s centre-right rival, PSDB’s José Serra, who had lost to Lula in 2002 who is recorded as so: “Referring to rising populism in the region, Serra said he found Argentine President Cristina Kirchner “cordial and smart” and suggested that if the USG has concerns about Kirchner’s populist politics, that PT presidential candidate Dilma Rousseff should cause greater concern.”

Also exiled during the Dictatorship, Serra was seen as Chevron’s man, an advocate of Petrobras/Pre-Sal privatisation, and following Rousseff’s 2016 ouster became Michel Temer’s Minister of Foreign affairs (only to resign due to health issues, returning to the Senate in February 2017). His PSDB party has been understood to be the preference of the United States since the 1990s, and had regular meetings with Embassy officials in the years leading up to the 2010 election, for which he was leading polls for some time. In this cable from 2008, he talks about the potential for the global economic crisis to benefit his own presidential prospects, while this 2010 summary discusses the economic outlook for the next decade, should Serra or Rousseff triumph in the coming election.

This cable warned that Rousseff’s candidacy is gaining strength in the polls behind their favoured candidate, Serra, while elsewhere, State Department staff discuss Dilma’s lymphatic cancer and the chances that it will prevent her Presidential run altogether. This final cable talks about her potential vulnerabilities – in particular that her harshest critics (such as TV Globo’s William Waack) are certain that “television and public speaking will kill her candidacy”.

Some would argue that disclosures such as these are not news, that the relationship between comprador class and hegemony is as old as colonialism itself, and that Coups -with or without U.S. support- are part of Brazil’s history. Yet what is genuinely revealing in these kind of documents is that the interests – Industrial federations, Banking & Media families, Military, and their language/political framing, be it in 1964, 1989, or 2016, are not only similar, they are near identical. That struggle of the developmentalists, beginning with Vargas, through to Rousseff, against elites in symbiosis with atlanticists, lies at the heart of Brazil’s current political crisis.