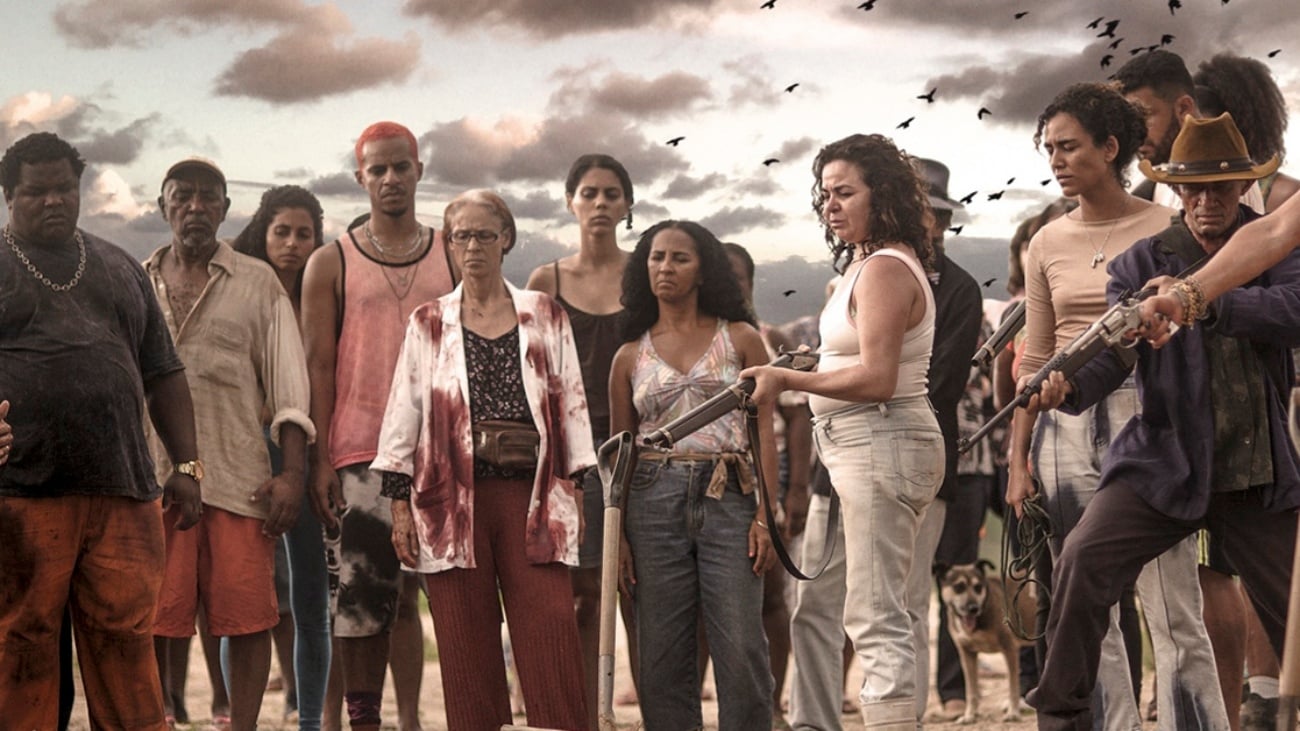 Director Kleber Mendonça Filho has an uncanny ability to divine dark currents flowing under the Brazilian psyche. His timing is extraordinary, and with his latest film Bacurau (Vitrine Filmes) co-written and directed with Juliano Dornelles, they have again captured Brazil’s moment, in an entirely unexpected way.

Mendonça Filho’s first full length feature, 2013’s critically acclaimed O Som ao Redor (Neighbouring sounds) and 2016’s Aquarius, were both parables and metaphors for the direction Brazil was taking socially. The latter was released just prior to the US-supported coup d’état against the country’s first female President, Dilma Rousseff, and the cast of Aquarius made a historic intervention on the red carpet for its Cannes premiere, advising the world of what was taking place in their country. In response, cinema-goers took to their feet to chant anti-coup slogans during the closing credits. It was a desperate moment, but hope had not been extinguished.

The cast of Bacurau made their own protest at Cannes this year where it received the Jury Prize. Three years on, the situation in Brazil has greatly worsened, more so than even the most pessimistic fears, and Mendonça Filho’s latest reflects the convergence of governmental and transnational violence which have engulfed it.

Starring Mendonça Filho’s regular collaborator Sonia Braga playing local doctor Domingas, and featuring prolific German actor Udo Kier (Suspiria) as the mysterious Michael, it also cast many citizens of the town of Barra in the state of Rio Grande do Norte where it was shot, and the producers held a 2000 capacity premiere for the locals, whose nearest cinema is over 100km away.

Set in the very near future, Bacarau takes its name from the tiny fictional town in which it is set, in a remote mountainous region deep in the northeastern state of Pernambuco. We are first introduced to Teresa (Bárbara Colen), travelling in by water tanker, who is returning home for the funeral of Bacarau’s matriarch Carmelita (Lia de Itamaracá).

On the road they witness a distant shooting, and encounter a truck full of coffins which appears to have collided in a fatal accident with a motorcyclist. These caskets are a recurring motif with a particular local symbolism; this is a region whose history is marked by thirst, hunger, and death.

In the opening sequences they pass an artery of the transposed Rio San Francisco, an enormous system of canals which irrigate the north east’s arid interior, whose plans date back to the time of Emperor Dom Pedro II. It was finally implemented by the government of Pernambuco native Lula, completed under ousted successor Rousseff, and, dripping with symbolism, the travellers observe that the canal has been intentionally blocked, starving their town of water.

The scene is set with governmental neglect. We see that the state school is abandoned, and we are left to dwell on a burned out Police car riddled with bullets.

“There are no police here”, we learn. We later learn why.

Carmelita’s son, Plinio (Wilson Rabelo) is the local schoolteacher, who tries to show his young pupils the town of Bacurau on Google Maps, only to discover that it is not present.

With an election looming, Tony Junior (Thardelly Lima), the deeply unpopular Mayor of neighbouring municipality Serra Verde, arrives in town with food, medicines and a dumpster truck full of books in an attempt to placate its citizens. Before he arrives the entire population has hidden in their homes, leaving the streets in an eerie silence.

Tension grows as unusual events occurring in and around the village leave its inhabitants in a state of siege, leading one of its number Pacote (played by Thomas Aquino), to suspect that they are under organised attack.

Two strangers, motorcyclists from the south of Brazil, enter the town unexpectedly. The local bard, playing an iconic Del Vecchio Dinamico Resonator guitar, improvises a song in the Pernambucano repente style, in response to their awkward conversation. As he follows them down the street, he continues to sing, oblivious to their discomfort, and his words hint at a second sight which prompts them to leave in haste.

As touched upon in Aquarius, Kleber, a native of Recife, goes headlong for the paradoxes of Brazilian race and class identity, and its untenable relationship with white supremacy in the northern hemisphere.

With the Government kowtowing to the United States and the country being sold off to foreign capital like never before, running through Bacurau is what could be affectionately described as a wholesome anti-Americanism. Brazil’s comprador class, the entreguistas – those now holding power in the country – are lampooned for their sycophancy, their naive subservience to foreign masters; in this case a group of sociopathic tourists with a vapid, nonsensically militaristic moral code, who have arrived with unknown objectives.

Actor Silvero Pereira plays Lunga, who emerges as one of the film’s improbable superheroes. Pereira has been unafraid of attacking Brazil’s Neofascist President Jair Bolsonaro on social media, and has also talked about the importance of Brazil’s diversity being properly represented in its notoriously white mass media. “I come from a very silenced culture” he said. “I do not have great references to characters I saw on public television, in cinema, in music. There are few that I look at and can say that they are similar to me. Today, I have the opportunity to do it differently. This is very important, as a political act to let people know that our rights have been won and that we cannot back down.”

Pernambuco’s ancient communities, its occult traditions, and its violent resistance embodied in the legends of anarchist folk hero Lampião, come to life in an exhilarating second half, which had the audience at Cinesala São Paulo in raptures.

Mendonça describes the often shocking violence it depicts as “an act of survival”.

This could be why fellow Cannes winner, A Vida Invisível by director Karim Aïnouz will instead represent Brazil at the Oscars for best foreign film, and indeed stands an excellent chance. But some are already talking about the nonchalantly defiant Bacarau as one of the best Brazilian movies of modern times – on a par with Fernando Meirelles’ City of God or Walter Salles’ Central Station.

Whilst Brazilians will see the influence of Cinema Novo director Glauber Rocha, when interpreted as a tropicalized Western, foreign audiences may find in Bacarau the landscapes of Sergio Leone, the existential tension of Deliverance, and even the lawless chaos of Mad Max.

But after all it has been through, the triumphant Bacarau is simply the cinematic catharsis that one half of Brazil needed.

What the other half make of it will be fascinating to observe.