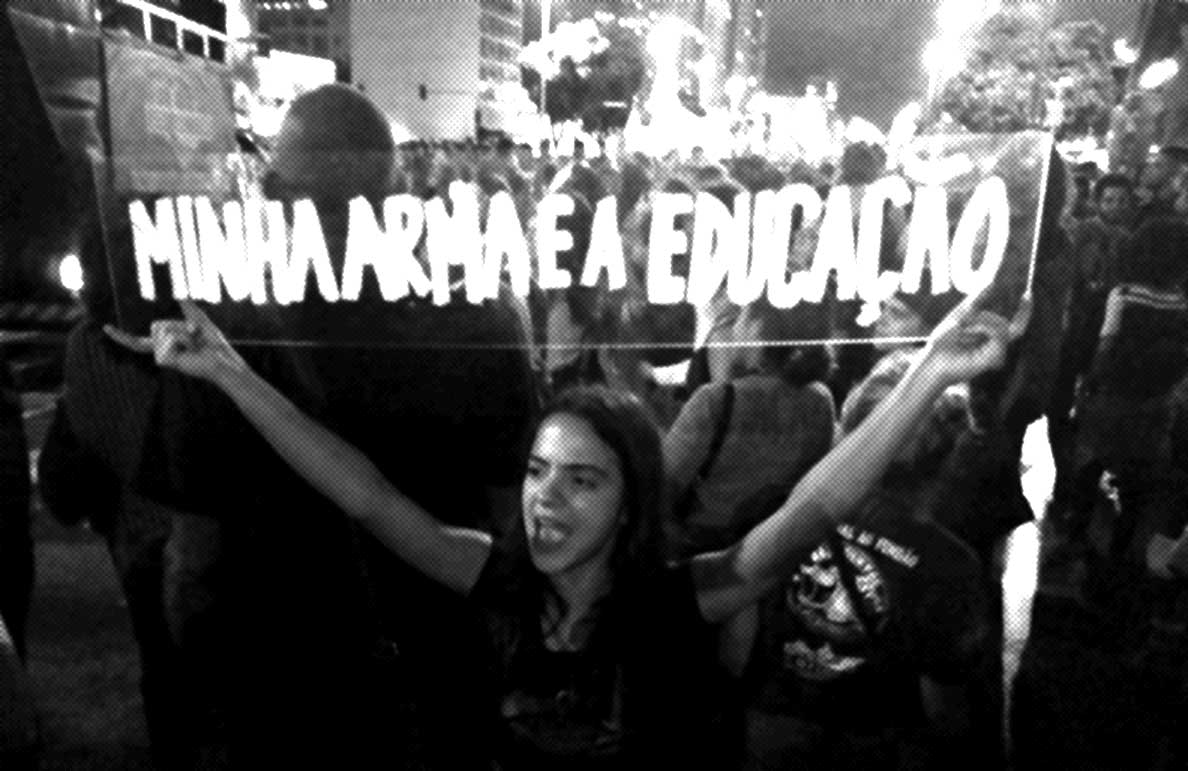 About last night: Brasil takes to the streets in defence of its future

On March 15 2019, a nationwide education strike became the platform for the biggest anti-government protests since Bolsonaro took power.

With over 1 million demonstrators on the streets nationwide (some estimating up to 2 million), it was the coming together of unions, professors, teachers, students, campaign groups, political parties and other diverse factions – the birth of a movement, and the strongest display of unity on the left that Brazil has seen in decades, at a scale that took many by surprise.

Literally a battle for the country’s future, it was the beginning of the fightback against Bolsonaro’s war on education, a needless wave of ideological vandalism, where an imagined internal enemy of “marxist indoctrinators” are both persecuted and used as justification for dismantling of the public education system. This includes the latest cuts of 30% in public university funding, which underwent massive expansion, and a revolution of inclusion, under the Lula and Dilma governments, with many of the working class and Afro-Brazilians having access to higher education for the first time in the country’s history. Economy Minister Guedes plans a privatised system from which those connected to him stand to profit, and school closures in favour of distance learning.

Philosophy and Sociology courses are to be shelved, as they were at the height of the 1964-85 Military Dictatorship, and scholarships have already been cut for thousands of students. In addition, research budgets have been slashed, and entire departments closed, causing a brain-drain of Brazilian scientists to foreign shores – an attack on the development of the country, on the future itself.

On the 15M demonstrations, education was combined with defence of worker rights and protest against neoliberal pension reform so coveted by foreign interests such as NATO think tank the Atlantic Council. It also encompassed elements of 2018’s ele não anti-Bolsonaro protest, and widespread demands to free political prisoner and former President Lula, who would now almost certainly be Brazil’s head of state had he not been jailed by Bolsonaro’s own justice minister.

In São Paulo an estimated 300 thousand congregated on Avenida Paulista during the afternoon, filling the area from Rua Augusta to Pamplona, with crowds packed tightly. At 5pm it set off towards the São Paulo State Assembly, adjacent to Ibirapuera Park. In Rio had similar numbers, filling Avenida Presidente Vargas before being dispersed by Military Police using tear gas and flash bombs. Massive numbers were out in Belo Horizonte, and the demonstrations were held in all state capitals, and on the esplanade in capital Brasília – in total, protests took place in around 200 municipalities.

A major difference between this, previous general strikes and mobilised resistance to the 2016 coup, was that TV Globo actually covered it.

As many observed, it did have a certain sensation of the mass protests which shook the country in June 2013 – but a self-aware version, where this time everyone present knew exactly why they were there. In 2013, many people were taken to the streets with confused and contradictory messages. There was no such ambiguity or incoherence this time.

Another difference from June 2013 is the response of the President. Then, Dilma Rousseff called the mass demonstrations a display of democracy, reminded that her own movement had come from the streets, and reiterated her plan for a revolution in public education, using the proceeds from Brazil’s newfound oil wealth, and also proposed an initiative for constitutional reform.

Bolsonaro instead stoked further anger by calling the May 15 2019 protesters “idiots” and “imbeciles”.

Bolsonaro’s new education minister Abraham Weintraub continues to blame the Rousseff Government for cuts made after the coup to remove her – a coup which he and his allies all supported. Their economic policy is a continuation of the Temer administration’s austerity, which included the notorious “end of the world amendment“, an unprecedented 20 year constitutionally protected freeze on health and education investment. That and the current cuts are based on the 2016 coup myth that Brazil was “broke” or even “bankrupted” under Rousseff. In reality it had R$1tn liquidity, made up of US dollar reserves, US bonds and other sources. This was built after repaying the IMF, World Bank and Paris Club, and was intended to insulate against economic shocks, making austerity cuts unnecessary. In Brazil as in other countries, austerity is a choice and rooted in ideology, not economic necessity.

Many insist that education is not ideological, and yes it shouldn’t be – but the discourse has shifted so far rightward that only the Brazilian left is fighting for public education. And Brazil has now had two successive governments whom fail to grasp the basic concept that education funding is an investment, not an overhead. There were also early attempts to co-opt the movement, from those at home and abroad that had supported the process which brought Bolsonaro to power, and the extreme neoliberal economic policy his government is pursuing. Those on the streets are unlikely to get fooled again.

Another day of mass protest is scheduled for May 30.