The Golpista Everyman & the “Clean” City

In October São Paulo voters went to the polls and threw out one of the World’s most progressive big city governments in favor of João Doria, from the conservative PSDB party. Doria, the former star of the Brazilian franchise of Donald Trump’s reality show, The Apprentice, campaigned on the vague promises of “cleaning up the city” and that “everyone would be able to afford a polo shirt”. “Cleaning” has been a code word for whitening and socioeconomic segregation since the early days of São Paulo when it’s richest neighborhood was named “Higienopolis” (Hygiene-city). On Christmas day two MMA-trained men beat a 53 year old street vendor to death in a subway station after he tried to prevent them from attacking a trans woman. The victims’s last name, Ruas, means “streets” in Portuguese. In this article architect and urban planner Luciana Itikawa places this event in the context of the 2016 Coup and consequent rise of the far right. This article can be seen in its original Portuguese here.

His name was Ruas. Luis Carlos Ruas. He was a street vender who worked in São Paulo for over 20 years. His nickname was “Indian”. Two men cruelly murdered him on Christmas night, 2016. They killed Ruas because he tried to stop violent aggression against a homosexual man and a trans woman. One of the criminals gave his motive, as if homophobia weren’t enough, that he was mad at his girlfriend. This Friday, December 30, 2016, several social movements are holding a protest to honor the street vendor at 3pm at Dom Pedro II metro station. 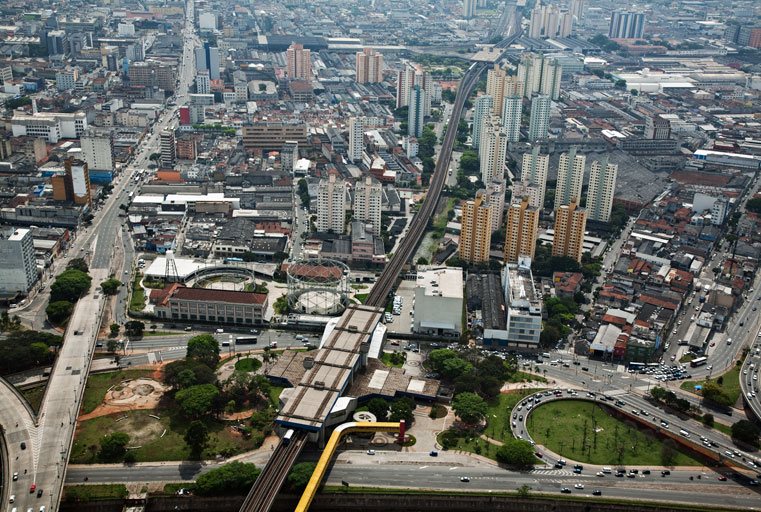 The crime location is a topographical territory that the city likes to pass through without stopping. D. Pedro II metro station is in the pit of a low plain – the Glicério lowland, historically ignored by urban planners and crossed by several overpasses including one which carries the metro itself. The Glicério lowland was the first periphery after the historic downtown’s urban fabric overflowed with poor people during the 19th Century. The 1886 Posture Law prohibited rooming houses downtown. This caused the first socio-spatial segregation to spread out to the East side. Upon arriving at the metro station, even at ground level, one has the sensation of entering the city’s basement by the amount of concrete that passes over this space, which is unfortunately called D. Pedro park. It is no coincidence that the area around this station is full of various populations that are excluded by society: the homeless, street vendors, sex workers, drug addicts and trans gendered women. The government institutionalized support for these people here, formerly in shelters and now in support services stands. Since the city cannot hide them it submerges them below the eyes of the wealth that passes overhead.

One of future mayor João Doria’s first proposed measures is to exclude or expel peddlers and homeless people from the city streets. Dória, who called homeless people “indigents” during his election campaign says that he will remove all peddlers from the streets of São Paulo and put them in shopping malls. On December 20 he said that he will fully remove both of these populations from the largest thoroughfares. Dória also created a controversy when he announced that he will remove the annual Virada Cultural music festival off of the downtown streets and into the Interlagos Formula 1 arena on the outskirts of the city where, “it will take place with security without bothering the population.”

The São Paulo State Public Defenders’ Office and a human rights organization filed a recent lawsuit to guarantee the permanence of street vendors in public spaces, in a planned and organized manner under the management of City government. The lawsuit was provisionally approved in 2012 and definitively ruled on in 2016. The verdict was to defend street vendors right to remain operating in public space, which was understood as their right to the city.

So what caused two men to brutally attack a homosexual and a trans woman and kill a street vender in this space that serves to hide these people from public view, below the overpasses? For those who believe that these populations should be removed so that poverty can move out of sight, Ruas’ death was merely an irony of destiny. He had the wrong name, the wrong nickname, the wrong profession and he was in the wrong location defending the wrong people. The point is that Ruas was not even vaguely wrong: he was a worker defending human rights. His destiny only had one irony. He was in the wrong year, 2016. This is the year that will end very shortly, that validated various layers of intolerance through a parliamentary coup. If a Coup is institutionalized it can legitimize all kinds of other daily coups against gender race, class, etc.

If the parliamentary coup of 2016 will be known as the liberation of all kinds of fascist ghost behavior and all kinds of additional coups against rights – labor, retirement, etc – what will be left in 2017? If the rest of the rights and small differences become extinct, the only thing left will be the “Golpista Everyman”. The Golpista Everyman is the violent, intolerant, homophobic, misogynist, racist and authoritarian version of that common citizen who seemed to be incubated during 2016 and will gain the majority in 2017.

The Golpista Everyman is the opposite of the “Man without Qualities”, portrayed in Robert Musli’s novel from 1930s Austria. This book portrays a common young man, Ulrich- a worker who searches for a sense of identity during a crisis. The man “without qualities” in this novel was not the one who handcuffed himself to be equal to his neighbors. He wanted to be a man without average qualities. His form of transgression was not through violence, indifference and negation like this Golpista Everyman. The “Man without Qualities” transgression was to become a “man of possibilities” because he opened to differences and for the invention of new identities. Exactly everything that 2016 wanted to negate and 2017 plans to execute.

It is certain that the Golpista Everyman was not born in 2016, but the Coup’s violence and the use of the economic crisis will continue to banalize the micro-coups, perpetuating small-scale evil, removal of rights and indifference towards inequality, the normalization of prejudice and the hierarchies of race and gender.

The ideal city for the Golpista Everyman is a city that is cleansed of its differences, that does not want to be bothered by poverty, race, sexual orientation or divergent gender roles. If 2016 created, nourished and fed this monster, we will also have 2017 as a field of possibilities, forces and new identities that will dispute for space as equals. This field of conflict will be on the streets.

Ruas. Luiz Carlos Ruas. We will be on the streets: with you and for you.