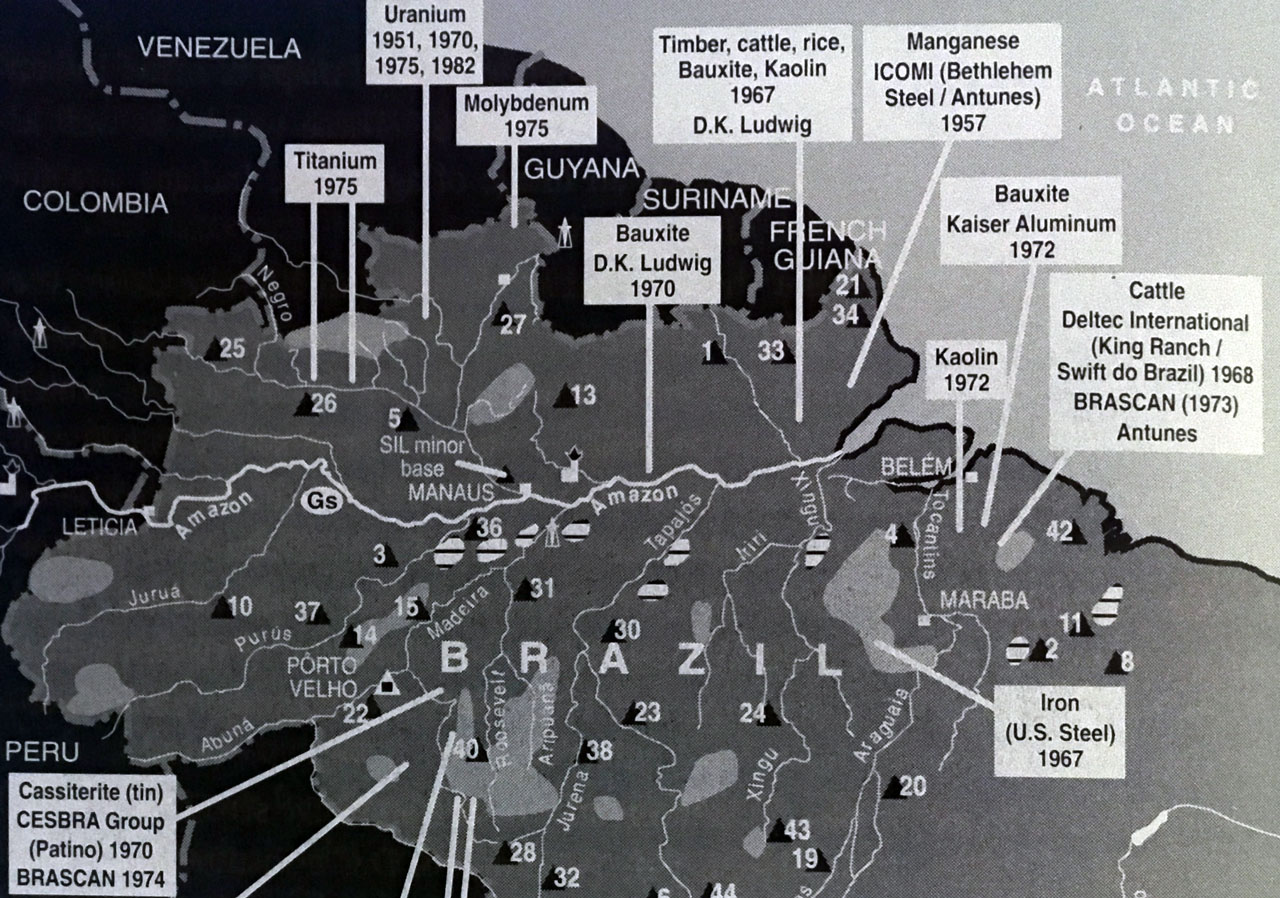 There is a left argument for Brazilian sovereignty that should never need to be made.

The 2019 G7 summit in Biarritz unnecessarily handed Brazil’s Neofascist Bolsonaro a propaganda coup with which to rally his dwindling support. With his approval falling to record lows and facing international attacks of unprecedented intensity, their colonial-sounding rhetoric allowed him to appear heroically nationalistic, a defender of Brazilian sovereignty over the Amazon, when in reality he and his government are fully geared to serve the interests of foreign capital in true comprador tradition.

Jair Bolsonaro is effectively the G7’s guy. He and his Chicago School Economy minister Paulo Guedes are implementing an ultra-neoliberal economic platform from which Brazil is sold off for the price of a Banana. There should be no doubt about who the practical rather than rhetorical defenders of sovereignty are on the political spectrum.

“Our Sovereignty over the AMAZON is NON-NEGOTIABLE. To defend it is to have the responsibility to take care of it and ensure its sustainable development, which does not mean weakening Ibama (Brazilian Institute of the Environment and Renewable Natural Resources), encouraging burning and disrespecting our scientists.”

Yet here we are, and a President whom NATO powers helped come to office via their support for the coup against Dilma Rousseff and imprisonment of Lula da Silva, has returned the favour, with an opportunity for their corporations to exploit Brazil to an extent not seen since the colonial era as depicted in Eduardo Galeano’s Open Veins of Latin America, and near future as envisaged by the subjects of Gerard Colby and Charlotte Dennett’s Thy will be done.

The G7’s cursory offer of $22 million US dollars is not money that Brazil actually needs, the country has $385 billion in reserves. The key failure of this thinking is the notion that the Amazon fires are some kind of tragic accident. It is not through oversight, incompetence or “failure to act” that the rainforest is in flames, it is a deliberate, planned and genocidal deforestation strategy, from which G7 companies are themselves in line to benefit.

A leaked presentation by Washington DC lobbyists close to the Trump administration shows US companies being recruited to exploit the Amazon, from the Mining, Agribusiness and Gas/Chemical industries. A myriad of G7-based companies are already directly benefitting from the far-right Brazilian Government’s policies. Justin Trudeau will be unlikely to mention the Brazilian operations of Canada’s notorious Mining sector, and from the United  States – Cargill, Monsanto, Boeing, Chevron, Exxon Mobil have all gained enormously from the post-Coup governments of Michel Temer and Jair Bolsonaro. There is even talk from Paulo Guedes to merge Banco do Brasil with Bank of America.

Scepticism over the G7’s rhetoric is unfortunately well founded. The idea of selling off tracts of the Brazilian Amazon to corporations for its own protection (note that the proposed G7 initiatives specify the Brazilian Amazon rather than the entire Amazon) emerged in 2006. Then UK Foreign Secretary under Tony Blair, David Milliband, addressed an environmental conference in Mexico and effectively proposed a corporate-led internationalisation of the rainforest.

This had its origins earlier that year, when Swedish millionaire Johan Eliasch, an environmental consultant to Chancellor of the Exchequer Gordon Brown, and former deputy treasurer of the UK Conservative Party, had bought 400,000 acres of Brazilian rainforest for £8m pounds (which has greatly increased in value since). Off the back of this initiative, Eliasch founded the organisation “Cool Earth” with the objective of finding buyers for tracts of Amazon land. This dovetailed with the concept of carbon credit, where companies buy areas of forest to offset their emissions elsewhere. (His company Gethal was later fined by environmental agency Ibama for illegal logging and use of land). In an article in the Sunday Times, Maurice Chittenden wrote: “Eliasch is part of a growing trend towards ‘green colonialism’. Rich people with chequebooks instead of pith helmets, charities and trusts, who are buying vast swathes of the Third World or ‘renting’ the timber rights to stop trees being cut down. It is a breakaway from the methods that have characterised the international conservation movement for the past 50 years.”

Eliasch was quoted as saying: “In theory you can perhaps buy the Amazon for $50 billion.”

It was this line that caused discomfort within the Lula government, and understandably so. Worse still, they had not even been consulted on the proposal beforehand. Back then there were legal limitations on foreign ownership of Brazilian land. Bolsonaro’s Government moved immediately to abolish them during his first months in office, as he did to decimate protections for indigenous peoples’ territory.

The Intercept’s Glenn Greenwald posted on Twitter: “one valid grievance the Brazilian Right has about the Amazon is anger over other countries – the US and in Western Europe – who already developed industrially & are destroying the planet, now demanding Brazil save them by not exploiting its own internal resources.”

But hostility to meddling Foreign Governments and NGOs is not confined to Brazil’s conservatives. The developmentalist left echo many of these sentiments for different reasons. They believe that the G7 do not want Brazil to develop and wish it to remain an exporter of cheap commodities – a glorified plantation economy. Thus Amazonian nationalism spans political boundaries. In 2010 Lula criticised demonstrations promoted by Greenpeace and Avatar director James Cameron against the Belo Monte Hydroelectric Dam project, as green colonialism – a gringo protest intended to hurt the electoral campaign of his successor Dilma Rousseff. The fall in deforestation under Lula’s Workers Party was lauded internationally as a success story, yet the standoff with Greenpeace continued, and they began to campaign on non-environmental issues under Dilma Rousseff’s first mandate. This even extended to bringing activists from the US to give lectures on innovative protest strategies during the 2014 election year. The road to Bolsonaro was paved with good intentions.

The history of foreign ambitions for the Brazilian Amazon and its riches is well documented.

In 1927, Henry Ford, then the richest man in the world, bought a large tract of land, around 12,000 km², in the state of Para, deep within Brasil’s Amazon Rainforest. Greg Grandin’s excellent book on the subject depicts one man’s deluded attempt to enforce his will on the natural world. Fordlândia, as the settlement was named, quickly became the site of a struggle between an industrialist and the most complex ecological system on the planet.

Ford’s early successes in imposing routine and even American midwestern culture such as square dances on indigenous workers made way as it slowly transformed into a raucous “tropical boomtown” before falling into abandon.

Around a decade ago, a mocked up page purporting to be from US high-school textbook showed a map which labeled the Amazon as an internationally administrated area. This spread around Brazil on the social network of the day Orkut, and was never completely debunked, returning zombie-like every few years to circulate on newer platforms. For native English speakers, its spelling mistakes and strange diction left no doubt that it was fake, but the real question was: did it actually reflect international opinion?

Such “Internationalisation of the Amazon” is being dismissed as a military dictatorship-era fantasy, now revived by Bolsonaro in a desperate answer to foreign outrage over the rainforest.

The problem is that this type of Amazonian nationalist sentiment has at its core an awareness of very real historic and ongoing designs on the region’s resources which it is naive to ignore, and a “resource nationalism” abhorred by the State Department and Wall Street.

“A small segment of the Brazilian public, including the elite, accepts the notion that the United States has a campaign to subjugate Brazil economically, undermine it culturally, and militarily occupy the Amazon.  Such attitudes and beliefs have influenced Brazilian reporting and commentary on issues such as the reestablishment of the U.S. Navy’s Fourth Fleet (which has been characterized as a threat to Brazil’s offshore pre-salt finds) and U.S. activities in the Amazon.”

Thus the problem is not genuine concern over the sovereignty of the Brazilian Amazon, it is the identities of whom are now talking about it. To make a defence of Brazilian sovereignty in the current context you could appear in alignment with those you oppose politically and morally, thus few are. But it must be made.

A few weeks before the Amazon fires exploded onto every front page and news network around the world, Foreign policy magazine, which had previously run columns normalising Bolsonaro and insisting that he represented no threat to Brazil or its democracy, published an article by Stephen M. Walt headlined: “Who will invade Brazil to save the Amazon?”.

“Aug. 5, 2025: In a televised address to the nation, U.S. President Gavin Newsom announced that he had given Brazil a one-week ultimatum to cease destructive deforestation activities in the Amazon rainforest. If Brazil did not comply, the president warned, he would order a naval blockade of Brazilian ports and airstrikes against critical Brazilian infrastructure.”

These extreme talking points have at the very least revived a trope that “Brazil cannot be trusted as guardians of the Amazon”, and this now re-emerges in countries which actually, even actively supported the torching of Brazilian democracy. Right now, as the Amazon burns, progressive Democratic Members of Congress have requested clarification from the US Department of Justice’s on its role in Jair Bolsonaro’s rise to power.

In essence, do we really trust those who did nothing to help Brazil defend its democracy from fascism, foreign governments in the service of extractive corporations, or their think-tank lackeys, to protect the Amazon and its peoples?

Instead, this wave of indignation and fear around the world should be channeled into helping the inhabitants of the Amazon rainforest and progressive Brazilians defend it themselves. To do this we must support their struggle to root out and extinguish the political cause of this catastrophe.