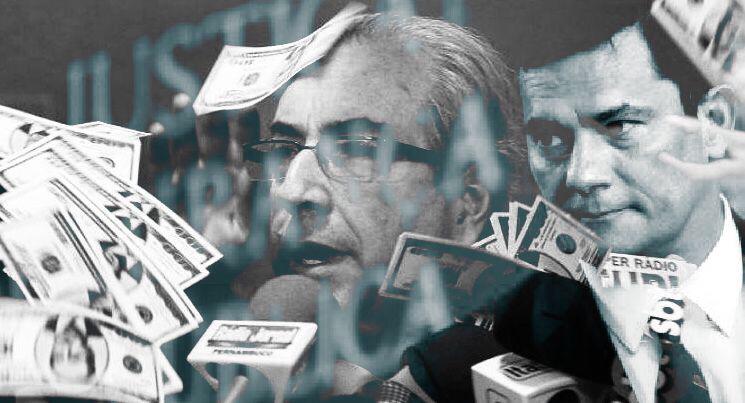 “Does anyone still doubt that Sérgio Moro was a central player in the coup?” said Congressman Henrique Fontana, on the revelation that Bolsonaro’s Justice Minister and former Lava Jato judge Sérgio Moro ordered prosecutors not to seize Eduardo Cunha’s cell phones. Cunha, now serving a 14 year prison sentence for corruption and money laundering, was the architect of Dilma Rousseff’s illegal 2016 impeachment, and has been implicated in a vote buying scheme to guarantee that it pushed through Congress.

The revelation that former Judge Sergio Moro prevented the seizure of cellphones belonging to Eduardo Cunha, the former Congressman who plotted to buy votes to overthrow former President Dilma Rousseff in the 2016 coup – dropped like a bombshell in Brazil today. To the opposition, the revelation makes clear that Moro was a key player in the 2016 coup d’état that toppled President Dilma Rousseff and replaced her with  Michel Temer.

The day before the arrest of Eduardo Cunha (MDB-RJ), Lava Jato judge Sergio Moro illegally conspired to persuade the public prosecutors not seize his cell phones.

The information was released today in the form of Telegram chat dialogues obtained by The Intercept through an anonymous source, published in partnership with BuzzFeed News.

The talks between Moro and the investigators took place on October 18, 2016. In them, prosecutor Deltan Dallagnol called for a meeting with Sergio Moro to speak about a request to seize the former House Speaker’s phones.

The file contains no mention of what was discussed during the face-to-face meeting between the judge and the prosecutor. However, Deltan Dallagnol sent a message at 2:16 pm saying that, after taking into account what the judge said, the task force canceled its order for apprehension of cell phones.

“We talked (sic) here and understood that we should not ask for the cell phones, due to risks involved , based on the appraisel,” wrote the prosecutor. The day after their talks, on October 19, Eduardo Cunha was arrested in Brasilia.

Once in jail, Eduardo Cunha questioned Federal Police agents about whether or not to hand over his cell phones and received a negative response, according to his lawyers.

At the time, both the Lava Jato task force and the Ministry of Justice announced that Eduardo Cunha’s cell phones had already been seized. But the statement actually referred to an event before the impeachment in December 15, 2015, when Eduardo Cunha had one of his phones seized as part of the ongoing corruption investigation against him.

BuzzFeed News and The Intercept‘s revelations, however, refer to a dialogue on 10/18/2016, ten months after the seizure cited by the prosecutors and the Ministry of Justice.

In response to the new revelations Moro said he “does not recognize the authenticity of messages obtained through criminals”, and that the Lava Jato task force claimed that Eduardo Cunha’s cell phones “had already been seized by order of the Supreme Court. “

As Eduardo Cunha has been implicated in paying bribes in exchange for impeachment votes against Dilma Rousseff, who was removed from office without having committed any impeachable crime, there is speculation that conversations showing who was paid off were contained in chat records on Cunha’s phone.

These new revelations could cause the continuing investigation on Cunha, who is already serving a jail sentence a series of crimes including personal enrichment through receiving millions of dollars in bribes, and laundering money through evangelical churches, to be transferred away from the Curitiba court system to the national Attorney General’s office.

This article was translated and edited by Brian Mier and can be read in its original Portuguese here.