Rio Olympics: A City within a City

During 2012-2013 Brian Mier conducted a study of changes in Rio de Janeiro’s municipal laws related to the World Cup and Olympics. The study was commissioned by the Ford Foundation and overseen by land-rights lawyer Cristiano Muller and the Brazilian NGO Centro para Direitos Economicas e Sociais (CDES).  Entitled, Os Megaeventos esportivos na cidade do Rio de Janeiro e o direito à cidade: uma análise do marco jurídico local, it will be launched in book form within the next few months. Unless otherwise notified, all facts, figures and quotes in this article come from this study.

The official price tag of the 2016 Rio de Janeiro Olympics is  R$37 billion. The PMDB political party that runs Rio de Janeiro state and city governments led a series of failed impeachment attempts against President Dilma Rousseff during the past year, making it a very weak member of the governing coalition at best. Keep in mind that the Congressional speaker and leader of most impeachment processes is PMDB’s Eduardo Cunha, an evangelical Christian from Rio de Janeiro who is currently under international investigation for depositing $5million in alleged Olympics-related bribe money in Swiss bank accounts.

These facts may not absolve President Rousseff and the PT party of all guilt related to wasted money and human rights abuses but they clearly show that the main culprits in Olympic corruption are the Rio de Janeiro state and city governments which, due to a partisan and corrupt judiciary, are extremely hard to hold accountable for any type of crime.

This article will focus  on the Rio de Janeiro port renovation project, called Porto Maravilha.  When the project was originally created through legally dubious manipulation of city law it represented Brazil’s largest Public Private Partnership with an initial budget of R$7 Billion. Amid ambitious construction plans, some of which have fizzled out, the project turned over city service management to a consortium of private companies in a 5 million square meter area with nearly 40,000 residents.

Rio de Janeiro is a unique city too frequently used by anglophone journalists and academics as a starting point for sweeping generalizations about the Brazilian government and the Brazilian people. Unlike the vast majority of Brazil’s other 5569 municipalities, large swathes of Rio are governed by organized crime groups. These paramilitary militias and drug trafficking gangs function as parallel governments, administering justice and frequently performing functions such as validating land transactions and providing cooking gas and pirate cable TV in a significant part of the city.  Within the unique context of Rio de Janeiro, Porto Maravilha can be seen as one more example of parallel governance.

Urban consortium operations were only legalized as part of the Federal Statute of the City in 2001. The Statute of the City required all cities of over 20,000 to facilitate new participatory development plans by 2006.  According to the Statute all new city laws have to be based on a participatory development plan, articles 182 and 183 of the Constitution and the City Organic Law. This means that Rio’s 1992 plan officially expired in 2006 and could not be used as legal justification for subsequent laws. Laws 101 and 102/2009 were created in a legal vacuum between the expiration of the 1992 Development Plan and the ratification of the new plan in 2011, rendering them technically illegal.

Complimentary Law Nº 102/09 authorizes CDURP to to act as a parallel power to the mayors office within the area delimited by the Porto Maravilha project, assuming the responsibility for the furnishing of public services such as landscape maintenance, street cleaning, garbage collection, rainwater drainage, public illumination, restoration and reuse of properties, conservation of addresses and urban and community equipment.

Furthermore CDURP was granted the right to conduct evictions in partnership with the Municipal Housing Secretary (SMH). Initially after CDURP was formed, roughly one third of the houses in Rio de Janeiro’s oldest favela, Morro de Providencia, were targeted for evictions. This was originally part of OAS construction company’s plan to build a luxury hotel and casino at the top of the favela with a cog railway connecting it to the cable car station that could carry tourists up from their cruise ships in the port. There was a lot of community resistance to this idea and a series of protests  slowed the process down. But one reason these evictions have not taken place seems to be because Eike Batista, the founder of OAS and once Brazil’s richest man, went bankrupt. Rio is now littered with half finished remnants of his megolomanaical development fantasies.

During an interview conducted for Os Megaeventos esportivos na cidade do Rio de Janeiro e o direito à cidade: uma análise do marco jurídico local, City Councilman Eliomar Coelho said, “The Porto Maravilha project is the most visible sign that Rio de Janeiro operates in a state of exception. Everything that is being done there bypasses existing laws. It’s unfortunate that we don’t see any legal measures underway that will be able to block what is happening. To give you an idea, what we have there is a little city operating inside the city of Rio de Janeiro. The Mayor’s Office transferred all responsibility for public services for the local population to CDURP. To give an example of how absurd this is, look at how garbage collection is operating. Since the CDURP consortium doesn’t have the capacity to collect garbage, they hired the City garbage collection department to perform the service. This idiocy demonstrates the series of ridiculous legal artifices made to justify the absurdities that are being committed in the area. It is a state of exception that doesn’t respect federal law, state law, municipal law, and the Rio de Janeiro Organic Law.”

According to the Statute of the City, all Urban Operation Consortiums such as CDURP are required to conduct neighborhood impact studies and environmental studies before any constructions begin.

In July, 2013, the State Government District Attorney’s environmental action group, GAEMA, opened civil lawsuit MA 6859, arguing that a series of crimes occurred within the Porto Maravilha project due to the lack of an environmental impact study and lack of adherence to federal regulations during the implementation of the neighborhood impact study. They presented three main arguments:

2) The neighborhood impact study created and presented by the defendants did not contemplate all of the elements of the environmental impact study, notably the requirements for public participation in the discussion; and

3) The neighborhood impact study lacks important content because the negative impacts of the enterprise were not properly estimated or evaluated. This omission also compromised the provision of future adaptation of mitigating measures, without which it is impossible to clearly attest to the urbanization-environmental feasibility of the enterprise and guarantee the integral satisfaction of public interest (p. 6, inquerito civil MA 6859).

A judge ordered the Mayor’s Office to redo the neighborhood impact study.  On July 10, 2013, the State District Attorney’s Office, the Mayor’s Office and CDURP, facilitated a preemptive public hearing aimed to anticipate the court rulings in civil suit MA 6859.

Sonia Rabello attended this hearing. “The Secretary of Cultural Patrimony (a mutation of the urban planning department) admitted that the demolition of the Perimetral flyover is not a transportation issue but an urban one, designed to raise property values in the area”, she said. “Oh, good. That’s better, since the technocrats in GAEMA contradicted the findings of the new neighborhood impact study that shows that the public works building a tunnel and express lane to substitute the Perimetral elevated highway is trading 6 for a half dozen. In other words, it will do nothing to revert the current option of road traffic and will do little or nothing to lighten the traffic problems in the area.  So, this is a work of urban aesthetics at an initially quoted cost of R$1,5 billion, digging 35 feet below the ground for four kilometers in an area with frequent flooding. What will the operating costs for this be? They haven’t been estimated. Screw the future!”

She also criticized the lack of a sustainable solution for urban mobility in the plan which is entirely based on roads and a light rail system, “which will only operate as a micro-system in the neighborhood”. She complained that the idea of extending the subway system into the neighborhood wasn’t even considered, and there is no pedestrian traffic plan or consideration for freight transport to and from the port itself.

Marcelo Edmundo from the Central de Movimentos Populares social movement says, “There is a certain level of collaboration on legal issues that makes up a big agreement between the judiciary and the government. We see it in the local courts, the public defendant’s office and the even within the District Attorney’s Office. Therefore I don’t see any legal way that we can preserve any kind of human right in the port area. Maybe if the people could mobilize more against these violations something could happen, but if we have to depend on the judiciary the only guarantee we have is forced evictions and displacement of the local population through gentrification, this process of erecting new buildings in the city that don’t do any good for anyone. I don’t see any legal way that we can fight this in the current context”.

In a city where corrupt police sell guns to the drug gangs and hundreds of thousands of residents of militia controlled neighborhoods are required to purchase pirate cable TV, the idea that private companies could illegally operate a parallel government in an area with 40,000 residents does not seem to surprise anyone. 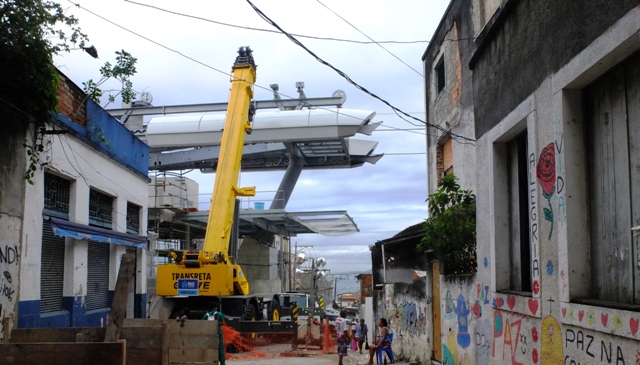