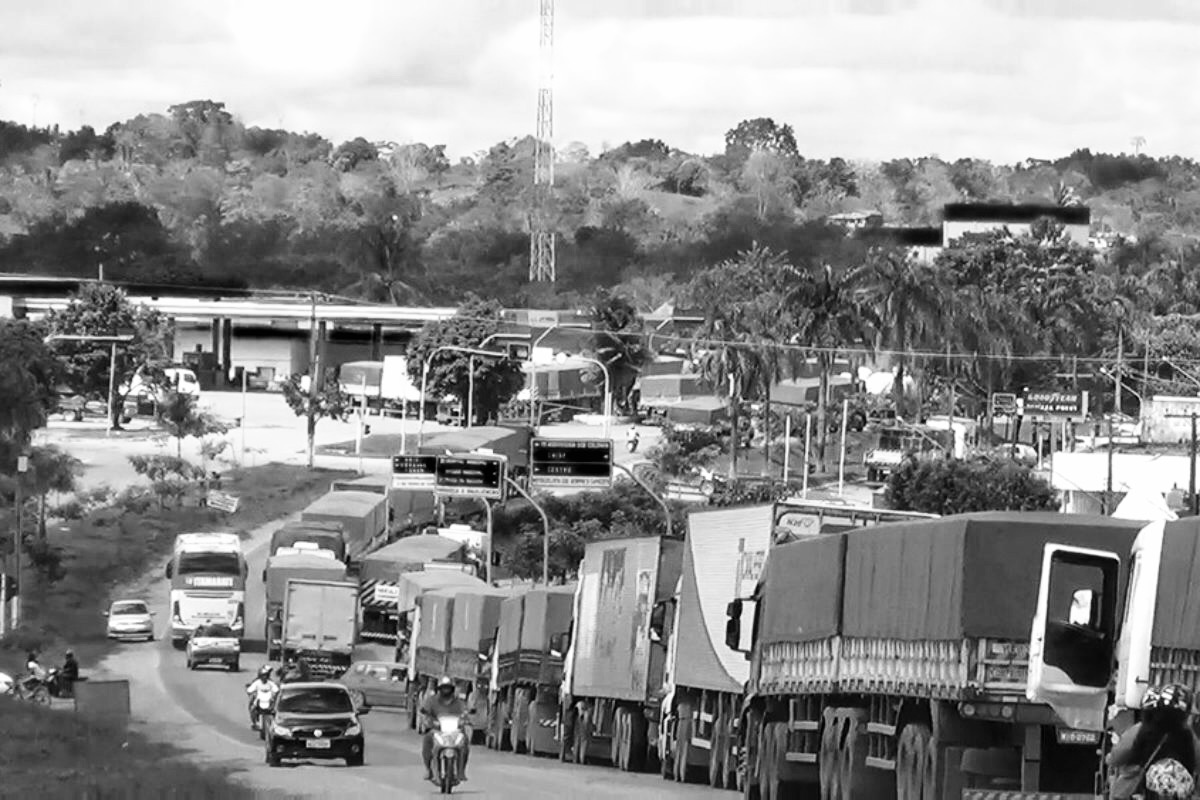 Truckers’ strike: not perfect but demands are legitimate

I have been writing for a truck driver’s trade newspaper for the past six years but would not risk making a thorough analysis of the current strike. However since many opinions (most notably by people on the “left”) circulating on the social media are beginning to make me feel uncomfortable, I would like to make a few observations. Keep in mind that I am not the owner of the truth or the light that will illuminate the consciousness of you or the truckers on the current situation. I am just someone who had the luck to work in this area during the past few years and am basing my observations on experiences within this sector.

The strike started as a movement driven by the National Confederation of Autonomous Transport Workers (Confederação Nacional de Transportadores Autônomos/CNTA). The call for paralyzation was made after it submitted an official letter with urgent demands to the Federal Government on May 15 as a prerequisite for establishing negotiations. The urgent demands were: freezing the price of diesel for the time necessary to discuss fiscal benefits that would reduce fuel costs for transport companies and truck drivers; and an end to toll charges for drop axles, which is still happening on state highways despite the fact that it is prohibited by Law 13.103/2015, also known as the Driver Law.

The CNTA letter threatened a paralyzation on May 21st if the demands were not met. It also explained that it is supported by 120 representative organizations, but did not specify if these organizations are employers unions or autonomous groups.

The paralyzation planned for May 21 happened because the government refused to negotiate with the CNTA and the other organizations. According to communications from its press department, it was also engaged in discussions about the regulatory framework for the transport sector and the issue of “payroll reimbursement”. I will open a pair of parenthesis here: since 2011, there have been discussions about payroll reimbursement in Brazil aimed to stimulate job generation. In recent years the dialogue was broadened to include labor segments such as road cargo transport. With payroll reimbursement the bosses have the possibility of choosing more “advantageous” ways to contribute to the pension fund, allocating 20% of the payments to workers and individuals (partners and autonomous workers) or collecting a quota over the gross income (the percentage of which varies within different sectors of the economy, in the case of the transport sector being between 1.5-2%). Last year the Temer government, through Finance Minister Henrique Meirelles, announced a payroll reimbursement with the justification that it was necessary to “balance the Nation’s books”. Currently, the increase in payroll reimbursement is being discussed in the Regional Accounting Court System.

The strike, which started on May 21st, took a series of demands to the road. The participants in the moment include both autonomous drivers and those who work for companies. The information we are receiving indicates that they are letting perishable cargo, like medicine and other items considered to be of urgent need, pass through the blockades.

The paralyzation is gaining the support of more and more transport companies, which are not fining their drivers or making salary cuts or layoffs because of the strike. After all, a reduction in the cost of diesel interests the owner class as well.

The strike is receiving a lot of national support because the high price of fuel does not only affect the delivery of services but the lives of a large part of the Brazilian people.

The unions are in a quandary. On the one hand, many union federations and individual unions have announced they are not supporting the strike and that it has the characteristics of a lock out because the demands have been led by the business sector in favor of its interests. On the other hand, autonomous workers unions, like the CNTA and Sindecam who paralyzed the Santos port region, and now ABCAM, which recently mobilized behind the negotiations, are supporting the movement. According to a note, the President of ABCAM was in Brasilia the other day and, after a frustrating meeting, said that the truckers’ strike would continue. The meeting had the goal of negotiating a tax reduction on fuel.

This is the general context of events that led up to the mobilization, which is being conducted by segements of the transportation sector. Taking these factors in mind I will make the following observations:

1) There is a clear attempt being made by the business class, which is excerting a greater influence on negotiations with the government, to appropriate the truckers’ demands. This means that, even though the strike is legitimate, it could result in a shot in the foot depending on what path is taken in the resolution between the different organizations and the leaders;

2) There is no unified set of demands. The movement is not hegemonic from a social or ideological point of view. There is a group of truckers who support Jair Bolsonaro, another group that is demanding a return to military dictatorship, and others who are asking for free elections now and freedom for Lula. In other words, it is a movement that is mainly centered around the issue of Diesel prices;

3) Due to the great complexity and fragility of the autonomous union leaders, the movement lacks a representation that could guarantee the demands of the working class and avoid the growth of conservative discourse and authoritarian practices. In light of this, the employers unions are exerting a greater influence, determining the path of the negotiations and the content of the demands. This can be noted, for example, in the type of demands expressed by a large part of the truckers for the reduction in taxes on fuel prices. After all, we all know that the root of the problem is the new pricing policy adopted by the Temer government under Petrobras president Pedro Parente;

4) Another parenthesis: Since last year, Petrobras has adopted a new pricing policy, determining the price of petroleum in relation to the international exchange rate fluctuations with the dollar. At the time, the policy was applauded by the international markets, who saw a big advantage in selling refined fuels to Brazil. Here in Brazil, according to a report by the Petrobras Engineers Association, the new pricing policy reveals a handover of national resources to foreign interests by the Temer government, which aims to dry dock the national refineries and prioritize imported fuel. This was all justified at the time with the argument that it was necessary to adjust Petrobras’ accounts to give more confidence to foreign investors;

5) The truth is that the movement as a whole has a poorly defined understanding of the reason for the fuel price increases. This does not mean, however, that the entire class of truckers does not understand the clear relationship between the price policy problem at Petrobras and the increase in fuel costs;

6) The biggest problem at this moment is to know who will sit at the negotiating table. On the one hand there is a legitimate expression of the working class in defense of its working conditions and its means of production. The increase in diesel prices is a tough blow for autonomous truckers and the demand for their reduction, whether through tax abatement or by questioning Petrobras pricing policy, is legitimate and should be commemorated;

7) The fundamental question now is to know what the government will use as a bargaining chip in the negotiations. This brings us back to the issue of payroll reimbursement. The government has already said that it will offer payroll reimbursement and this will be one of its resource mobilization measures if they remove the PIS/Cofins taxes on fuels. In practice, however, this measure could have an impact on truck drivers employment levels, resulting in layoffs; and

9) If there is an end to diesel taxes, according to the provisional measure introduced by Orlando Silva (PC do B/São Paulo) in Congress which has a paragraph that excludes the fuel tax, the working class and all of society will be affected. After all, if the government’s tax base is reduced there will be further cuts made in social security, retirement pensions, public health, etc.

Considering all that has been said, I am bothered by simplistic analysis and perceptions coming from some people who say they are on the left about the truckers’ movement. The word “lockout” has become candy in the mouths of the analysts on Facebook. Because they don’t meet our needs of the ideal “movement”, the truckers who are legitimately mobilizing in the name of reducing the price of diesel are being labeled as sell outs – as an amorphous mass prepared to be manipulated.

The purists do not understand the complexity of this labor category and the difficulties of promoting the mobilization of these workers, considering the extremely precarious conditions they are subject to and also the itinerant reality of their work. Furthermore autonomous workers unions suffered a hard blow when the labor reforms marked the end of mandatory labor union fees. I am sorry to say this to my academic colleagues, but our models of social analysis do not always apply to the real world. This can not be treated as a battle between good and evil, nor as a totally co-opted and illegitimate movement, a manipulable or dumb mass. On the other hand, it is also not a movement whose protagonists have a consciousness as a class or labor category. It is not unified and the demands are heterogeneous and volatile. For this reason, part of these workers are expressing conservative viewpoints and some groups of them are showing extremist views about politics and their strategies for fighting.

None of this, in my opinion, makes the mobilization illegitimate. To the contrary, it is an invitation for us to try to better understand these social categories and for us to accept that social mobilizations do not always meet our idealized objective and organizational criteria.

*Larissa Jacheta Riberti is a Journalist who writes for Chico da Boleia, a trucking trade publication which has a large internet presence and a print circulation of 50,000.