On July 17th, a Rio de Janeiro judge sentenced 23 activists who participated in the June 2013 protests to prison sentences ranging from 5-7 years. Among the convicted is lawyer Eloisa Samy, who helped with their defense when they were initially arrested. In the following article, Dr. Ivana Bentes, Professor of Communications at Universidade Federal do Rio de Janeiro, argues that the action represents a counter attack by the conservatives forces that were being protested against.

They condemned the people who saw our tragedy

Behind the political ruling against 23 activists from the June 2013 protests, is an attempt to silence the critics of an old world crisis who suggested possible ways out of it.

The streets of June foretold of the swamp that we are in now. The seven-year prison sentences given to 23 participants of the June 2103 protests this week are an overwhelming tragedy. But who are the vandals? There were 23 political arrests in 2013, in addition to Rafael Braga, who was unjustly arrested at the time. This, together with Lula’s imprisonment, amounts to a complete tragedy of justice in a context of social malaise and anomie.

The 23 convicts of June are ordinary people like you and me: students, activists, a lawyer, a professor from Rio de Janeiro State University. It could be any of us! 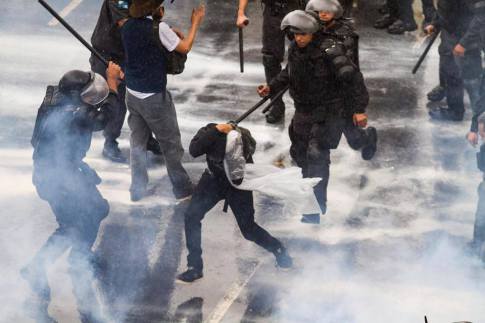 The streets of June foretold the tragedy that we are living in now – the end, the impossibility, the horror of confronting these old politics. And the response of the justice system is to restore a world that is even more poisoned! A demoralized Judiciary, a Coup, Lula’s imprisonment, fascists with a necrosis-candidate, Jair Bolsonaro. They are not the result of 2013, they are the COUNTER-ATTACK. It’s very different. They are the death rattles of a world that will end.

They want to condemn and arrest the people who foretold the crisis of an old world, who announced ways out of it and other horizons. Everyone who was on the streets in 2013 knows that this prison sentence is a fraud: “Sentences range from 5-7 years of prison for crimes such as recruiting for a gang, criminal damage and corruption of minors.”

Gentlemen of the poisoned justice system and the old politics, help us and extinguish yourselves!

Only another convulsion will get the nation out of the inertia which has engulfed us all.

*This article originally appeared in Portuguese in Outras Palavras, and can be seen in its original form here.